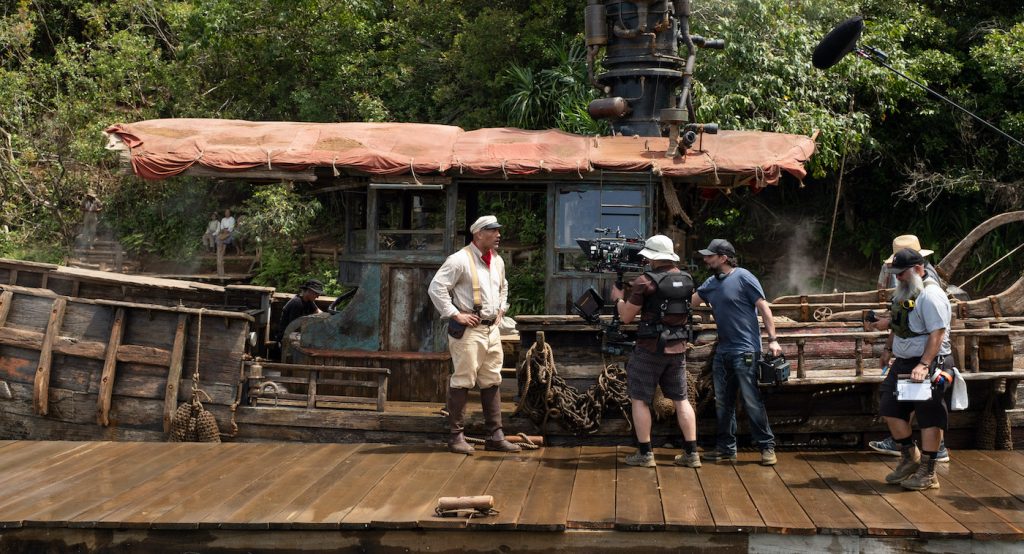 Disney’s latest blockbuster based on a ride, director Jaume Collet-Serra’s Jungle Cruise, is a banter-filled romp down the Amazon. Blue-blooded adventurer Lily (Emily Blunt) drags her fusspot brother, MacGregor (Jack Whitehall), to South America in pursuit of the petals of an all-powerful healing tree. Their guiding trinket is an arrowhead, pilfered with great difficulty from a retrograde London men’s scientific society. Upon landing on the other side of the world, the pair wind up in the hands of riverboat captain Frank (Dwayne Johnson), a debtor prone to horrendous puns but an otherwise upstanding fellow. The group is plagued by trouble from the start, but Lily is determined to fulfill her adventurer father’s incomplete mission.

Competing factions have equally virulent but less altruistic interest than Lily in the magical flora. For a group of zombie 16th-century conquistadors, the petals are their solution to return to the living and wreak revenge on the entity that cursed and bound them to the river. A marauding German prince, Joachim (Jesse Plemons), sees the petals as the key to Germany’s wartime success (it’s 1916, and World War I is raging across the ocean). But it takes Lily’s gumption and Frank’s grouchily proffered support to unlock the secret of the tree, an event that takes place in a giant underwater puzzle.

The scene is only a few minutes long but the plot hangs in its balance. Underwater cinematographer Ian Seabrook (Old, In the Shadow of the Moon), shot Blunt and Johnson in one tank for the moments above the water’s surface, avoiding a huge vacuum intake valve creating an artificial current. “I was told by the marine coordinator ‘don’t go anywhere near that,’ because that’ll just suck you right underwater,” Seabrook said. Below the surface of the water, in the production’s second tank, Lily’s goal is to get back up as fast as she can — solving the puzzle causes it to rise out of the water. Seabrook held on to 80 pounds of camera and housing in order to get the shot, in which Lauren Shaw, Blunt’s underwater double, was locked into the puzzle with one small top opening to escape. “They did have a spare air tank in there for her, but she never used it,” Seabrook said of Shaw, who didn’t even need to use a regulator to breathe during rehearsals.

“The set itself was an overhead environment and it was confined. So when she’s moving the puzzle pieces around, [Shaw’s] really got her back against the wall. And she’s got something over her head. So she’s holding her breath while doing all that, using her feet, and doing whatever else she was doing. She was spectacular,” the underwater cinematographer added. For these crucial scenes, Seabrook also spent plenty of time holding his breath while plying his craft. The shots were 15 to 30 seconds, with preparation to get everything down bringing the time spent underwater to about a minute (all the underwater scenes were shot over the course of a week and a half). The process looks different in, say, the open ocean, but “oftentimes, when we’re in these smaller sets, if you wear an oxygen tank, you’re smashing into everything, you’re going to wreck the set, and you don’t have the mobility,” he said.

The underwater cinematographer was first called to his unusual line of work as a child, holding his breath watching Sean Connery swim through a shark-infested estate in Thunderball. He later began his career as an underwater photographer, progressing to underwater cinematography, a field in which the camera comes first despite the unusual physical demands. “The job entails composition and lighting and grip work and breath-hold and your diving skills have to be second,” Seabrook explained. “You can’t even look at anything. You have to concentrate on the shot, otherwise, you’ll be flailing.” Despite the jocular vibes, there’s no room in Jungle Cruise for heroine Lily and her sidekick Frank to flinch, and behind the camera, it was the same, whether above the surface of the river or below.

For more stories on Walt Disney Studios, and what’s streaming or coming to Disney+, check these out: