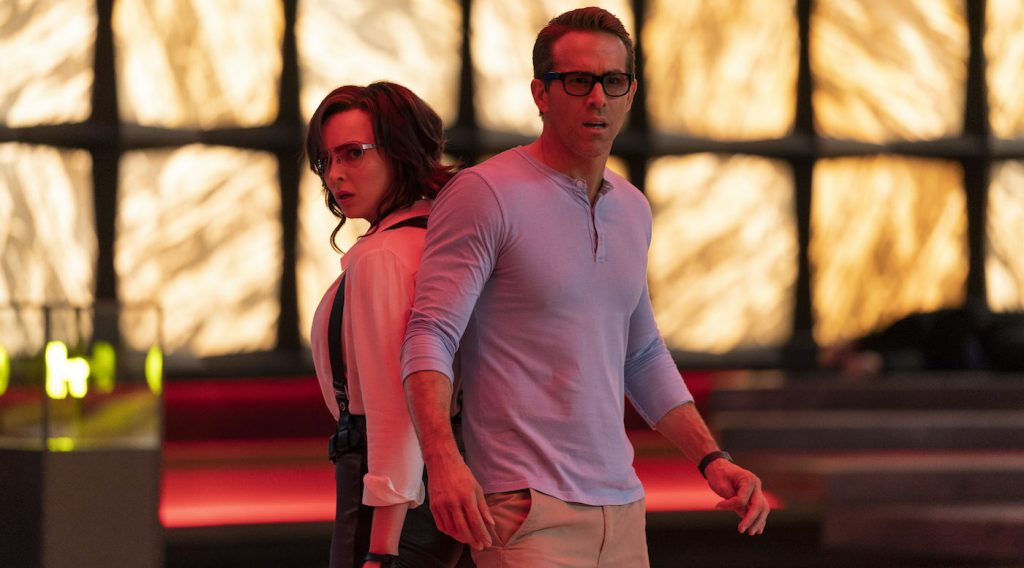 Zak Penn started his career on a high note when he sold his first script at age 23 and landed Arnold Schwarzenegger as the star. The thrill didn’t last long. Last Action Hero got re-written, Penn was relegated to a “story by” credit and the would-be blockbuster flopped at the box office.

But Penn survived the ignominy and 28-years later, he’s become an expert at crafting tentpole action epics like The Incredible Hulk, The Avengers, X-Men: The Last Stand, and Steven Spielberg’s recent Ready Player One. In the case of Free Guy, now in theaters, Penn came on board to sharpen Matt Lieberman’s initial screenplay into final form. The film, directed by Shawn Levy (Night at the Museum) stars Ryan Reynolds as a minor video game character who realizes he’s merely an extra in somebody else’s creation after he meets the avatar of his dreams, Molotov Girl, aka Millie (Jodie Comer of Killing Eve fame). Together, Guy and game developer Millie fight to bring down egomaniacal mogul Antwan (played by Jojo Rabbit and Thor: Ragnarok director Taika Waititi).

While Free Guy takes place mostly within a virtual video game world, Penn aimed to make the story accessible to non-gamers. He says, “I have no idea what a “collision match” was before I worked on this and I really didn’t care because here’s the thing: Free Guy is more about using the background of the world of gaming as a place to tell a story about these characters. Fundamentally, Guy could have been trapped anywhere.”

In New York City to attend the Free Guy premiere, Penn got on the phone with The Credits and talked about story architecture, Elf as inspiration and action that has consequences.

The Free Guy script has been floating around since 2016. How did you first get involved as a co-writer?

Shawn Levy called me directly and he’s like, “I have this script and I know you’re going to say no to re-writing it but will you just read it for me?” And I said, “Okay but why do you think it’s going to be a no?” and Shawn said, “Coming off of Ready Player One I doubt if you’ll want to do it.” Then I read the script and I was like “This is nothing like Ready Player One.” Yes, there’s a big video game-y reference, but Ready Player One is about real people sent to the future, it’s about nostalgia. Free Guy actually reminded more of Last Action Hero, or the Will Ferrell movie Elf, or any number of movies where you’re dealing with this almost mythological character living in his own world. I told Shawn not only am I interested but I’ve written this type of movie before and I’ve seen it get destroyed so I know where the stress fractures are.

Free Guy draws on a lot of different genre traditions. How did you develop the story architecture to make sure all these disparate elements came together in a cohesive way?

I’ve been doing this for 31 years so I’ve got an understanding of how movies should be structured. It’s very hard to pull off a good movie without good architecture, so it’s not like we just improvised a bunch of stuff and threw it up on the screen. Free Guy is intricately plotted with multiple types of stories running through it. My job was to kick the girders of the architecture and say, hey I think this building’s going to fall down over here; you’ve got to fix this thing or it’s going to tilt over.

What kinds of fixes did you have in mind?

One of my notes to Shawn and Ryan was that Millie’s really the main character, not Guy. Most actors would be “What?! Definitely don’t hire him!” But Ryan was like, “You’re a hundred percent right. I’ve been approaching as if it’s all from Guy’s perspective but the audience needs a way in, and that’s Millie.” It had nothing to do with “The audience wants to see a female lead.” It was about fixing the underpinnings of the story.

You’ve previously written ensemble-driven movies like X-Men: The Last Stand and The Avengers. Did those experiences impact your approach to the multiple storylines in Free Guy?

It’s actually easier to write for ensembles, particularly X-Men, because any time the story gets boring you can just cut away to another subplot. Free Guy does not have that luxury because all of our subplots run through the main characters.

Can you summarize those subplots?

First, there’s a villain who’s done something bad to our heroes so they have to join forces and stop him. That’s a familiar one and something I know a lot about because I’ve written a lot of movies. Then there’s a romantic subplot which I won’t give away entirely, but it’s a bit of a triangle and not exactly what you think it is. You’ve also got the classic story about a person trapped in his own life trying to assert his fate, which you see in everything from Terminator and The Matrix to Lawrence of Arabia. It’s a strong thread for Ryan’s character Guy: “I’m not a background character, I can be something more.” Then there’s the bizarre “Thing that’s not supposed to be alive coming to life” idea, which is a genre unto itself about magical characters that shouldn’t exist, like Elf, which I think is one of the most charming comedies of the past twenty years. It’s Will Ferrell being funny but it’s also Will Ferrell being innocent and sweet. The first time I heard Ryan read his lines, he wasn’t the wise-cracking Deadpool-y character who’s showing everybody up. In Free Guy, Ryan’s a complete underdog who doesn’t understand anything. He’s desperate to learn even though he’s often the butt of the joke. Ryan wanted to lean into that hard.

And then there’s Millie, the idealistic game designer who’s bitter about having her ideas stolen by Antwan, the hack video game executive.

What I tried to bring to Millie is someone who’s clouded by anger over what has happened to this creation of hers that she put so much into. It’s frustrating for her to see it turned into, lets be honest, a buggy, not very good game. So a lot of scenes are thinly veiled references to the creative process and how creators deal with this big industry that steam rolls over them.

That’s a lot of story to keep track of.

And I’m probably missing one or two. But getting back to the point about architecture, Free Guy is not a simple building. It’s a complex structure with a lot of different stories running through it and they all have to be set up and paid off properly and intersect at the right times. On what page does Millie gets introduced? At what point does Millie figure out who Guy actually is? When does Guy figure out who he is? That’s when you have to put [the scenes] up on cards and figure out “This is why you’re not getting the thing you need from that subplot because you stepped on it over here and the audience won’t care anymore because they’ve already heard it three times.” That’s the heart of being a Hollywood screenwriter who re-writes stuff. I’m glad not everyone can do it. It’s taken me many years to develop that skill.

Action sequences also play a big role in Free Guy. Do you ever think “Oh, I’ve gone for eight pages with people just talking so now I need to throw in some action?

Not at all. What you need from action is a turn for the character. If it’s just Guy being chased – – he dodged this, he dodged that – – and nothing happens to change his circumstances, then you’re going to get bored. Steven Spielberg made this point to me on Ready Player One. He said any time it seems like the characters are stopping the story to talk, put that dialogue in a scene where a lot of action’s happening because they shouldn’t be separate. They should be part of a whole.

Decades ago working with Spielberg, you learned a lot about action movies by researching Last Action Hero, which you wrote in college and sold when you were only 23 years old. How did that happen?

I wrote Last Action Hero with my then-writing partner Adam Leff at Wesleyan University in Connecticut. Everyone warned us “Don’t write a movie about movies, don’t mix genres.” But we spent five months in a room researching every action movie ever. Then we wrote the script, sent it out, got an agent, he sold it immediately and Arnold Schwarzenegger signed on to do it. Next thing you knew we were on a roller coaster at 140 miles an hour. “How did we get on there?!” The rest of it was about navigating the fact that Last Action Hero turned out to be a huge bomb.

Last Action Hero got re-written by other people and you weren’t happy with the result. Now, you’ve become the guy who comes in to re-write someone else’s script. Is that weird?

I have a long history of writing originals and being on the other end of this [process], there’s nothing more painful than being the person who writes something and then watches as your involvement is erased and your credit is reduced. I’ve seen a lot of people be jerks because they’re insecure and try to grab all the credit. But as writers, I think we have a duty to back each other up. For me, it’s a pleasure to say that Free Guy was a spec script written by Matt Lieberman to the extent that people could see the movie as soon as they read it. That’s the backstory. This movie began in Matt’s brain.