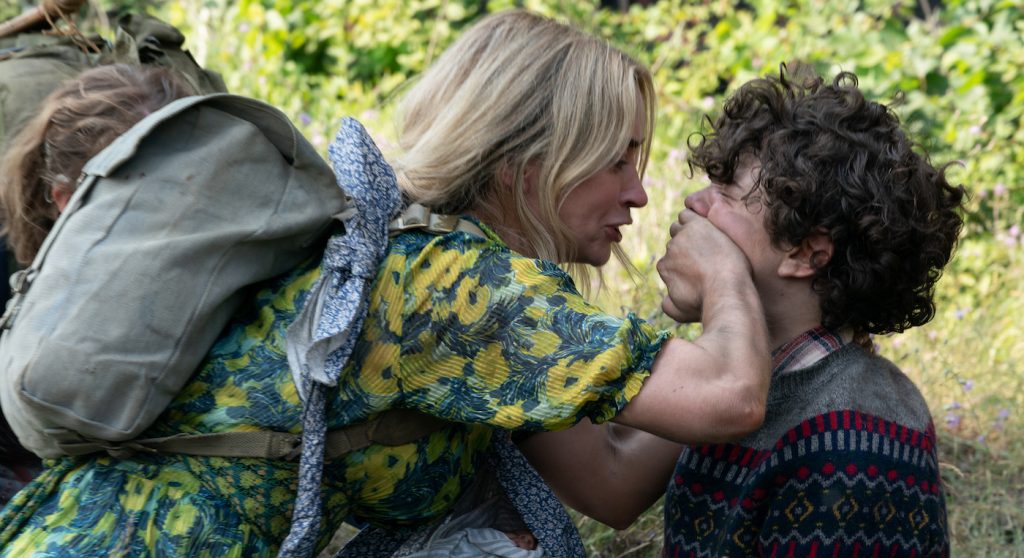 The first box office hit of this summer’s return to in-person theater-going, A Quiet Place Part II picks up a few moments after its predecessor left off. Evelyn Abbott (Emily Blunt) is now on her own with her three children, her husband, Lee (John Krasinski, the film’s director and writer) having been killed by the monsters with hypersensitive hearing that now stalk the Earth. With the baby packed into a box, she and her two older kids, Regan (Millicent Simmonds) and Marcus (Noah Jupe), take off in a state of grief to find a way to moor themselves in this dangerous, silent world.

The Abbott family home is destroyed. Emitting so much as a peep is a giveaway to the monsters, who are as savage as they are blind. But Regan, who is deaf, previously discovered a point of vulnerability — these hard-to-kill creatures are sensitive to high-frequency audio feedback, and by going on the offensive with Regan’s hearing aid, a microphone, and a radio, the Abbotts are able to make their way toward what remains of civilization. On the way, they encounter Emmett (Cillian Murphy), who takes them in at his bunker, before Regan slips out on her own, making a key discovery on an island with a group headed by a mysterious community leader (Djimon Hounsou).

Like its predecessor, A Quiet Place Part II is terrifying in its silence, the effect of which is enhanced by composer Marco Beltrami’s score. Beltrami, whose horror credits also include the Scream franchise and World War Z, wrote the music for both films, incorporating the suspense lent by sound into a world otherwise gone quiet. We had the chance to speak with the composer about his process moving from Part I to Part II, the impact of music in such a uniquely silent film, and what really gives a score a meaningful fear factor.

When did you start the process for A Quiet Place Part II? Was there a sort of continuity with the first film?

It all started with the first one. All the musical material was an extension of things I had done in the first movie. So I guess you could say the process began about four years ago when I first met John and started talking about the music for it. There are some new musical themes in this one, but for the most part, it’s the same world—the picture itself is the same world.

How did creating a score for the experience of characters for whom silence is key to their survival influence your process?

The concept behind the thematic material in this was that, since they’d been living in silence for so long, maybe they had forgotten a bit what music sounds like. So how could I reflect that in the score? I detuned all the black notes on a piano by a quarter tone so that they would sound a little bit off, almost like the memory of what a piano is supposed to sound like is fading. Thematically, that was one way I achieved that. The other is, the thing that’s really unique about this movie is that there’s so much silence—as soon as you do anything musically or sonically at all, it calls attention to itself. So you can work with very delicate textures and have them be a lot more prominent than you could in a traditional score. That was another thing I really played around with.

And to get to where you need to go with the score, what was your first point of reference or inspiration?

The things that would guide me on this are not that much different from any other film. And this is why it’s hard to work from a script—it’s very hard to get a sense of pacing, and that’s really important to the music, how the music interacts with the film. The tempos and everything are very important and the color of the film, the way it looks—not just the physical color but the overall tone, which is a combination of many things, the way it’s acted and the way it’s shot—that really affects the tone of the music. So that’s something that definitely affects me. If there’s some underlying emotional tone that maybe isn’t even expressed in the dialogue or in the film, but is something that feels like it can be reinforced, having a point of view, that’s something that I look at.

Did you look at a script at all before you started work on A Quiet Place Part II?

On this, I asked them not to send me a script. I wanted to just see and get an impression from screening the whole film at once. I have in the past worked from scripts and I find it’s usually been really disillusioning. I normally go off on strange tangents that are sort of my interpretation, which is completely different from what is actually made into a movie.

Having worked on both chapters of A Quiet Place, were there directives from John Krasinski about how he wanted the score to sound this time around?

He really wanted to keep the world of the first movie alive in the second movie. It wasn’t really a question of reinventing the wheel for this movie but more extending the sonorities and the harmonies and the melodies and the themes that we’d already established. As I was working on it, I met him once when we first screened the movie, he came out to Paramount. After that, he was really busy working in New York so I’d send the music through the music editor to play for him. At one point he wanted to hear more options on certain things—the new thematic stuff, a new character. For the most part that was pretty minor in terms of what I did. It was pretty straightforward.

You’ve done so much to define how contemporary horror sounds. Is there an instrument or synthesizer that’s a particular go-to when you want to create a sense of doom or foreboding?

No. It’s really dependent on the film. It’s not like a particular sound that I use for every movie. This is definitely a hybrid score. There are orchestral, acoustical elements which are more, in this movie, geared toward the human elements, and then there’s the electronic stuff which is more geared toward the monster-alien themes. I think it’s like trying to find the key to the picture itself. I think the whole element of making scary music is being aware of the humanity of the picture first and being able to contrast that with things that would be disruptive to that. And it’s by investing in the family in this movie and in the characters that you really feel for them, care for them, and that way anything that might threaten that becomes scary.

For more on A Quiet Place Part II, check out these stories: