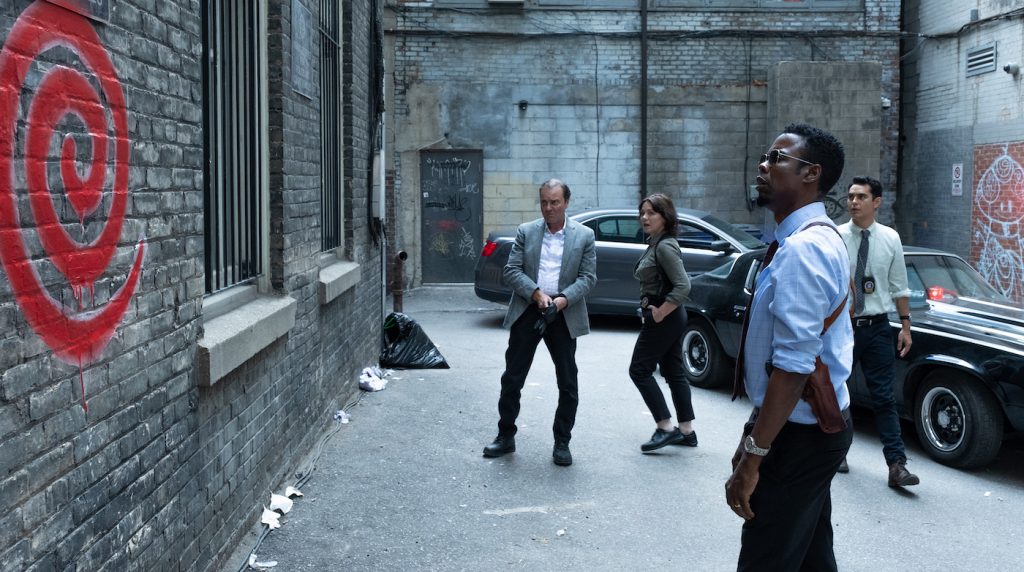 The ninth installment of the Saw film franchise, Spiral: From the Book of Saw, directed by Darren Lynn Bousman and in theaters now, takes the series in unexpected new directions. Chris Rock shelves his comedic side for the brash but grim role of Ezekiel “Zeke” Banks, a divorced detective who winds up leading an investigation into a grisly series of murders, wherein the dead are all Zeke’s fellow cops. Working with rookie William Schenk (Max Minghella) and their captain, Angie Garza (Marisol Nichols), they realize the gruesome work of the murderer at large is reminiscent of Jigsaw, a serial killer now long dead. Zeke has a complicated relationship with his father, Marcus (Samuel L. Jackson), himself a retired cop, but it’s Dad who warns him just how bad things will get if a Jigsaw copycat is indeed on the loose.

Marcus’s prediction is correct, and as the body count of dirty cops grows, so too does the macabre quality of their deaths. As this deadly game intensifies, we get glimpses of the city’s cast of villains. Even with the familiarly sinister Jigsaw cloak in play, Spiral’s maniacs aren’t what you’d expect of the Saw franchise, which, as we learned from costume designer Laura Montgomery (Suicide Squad, What We Do in the Shadows), was a deliberate stylistic decision. The first criminal we see, a thief, is dressed as a filthily vintage Uncle Sam, complete with striped fall-front trousers, a grimy waistcoat, and an American flag hatband.

On the other side of the law, present-day Zeke is functionally if nattily dressed in basic suits and a dark, saturated color palette that nods to the look of law enforcement in mid-century film noir. We had the chance to speak with Montgomery about working in such an aesthetically different take on the long-established Saw world, coordinating with Chris Rock to showcase his character’s evolution (we get a sense of Zeke’s complicated history with the police force through a career-spanning series of flashbacks), and the kind of research it takes to get not just blood, but weird, complicated Saw world blood, correct and consistent across the film’s makeup, prosthetics, special effects, and costume departments.

Spiral is an aesthetic departure from the Saw franchise. What kind of references did you look to, and what kind of details did you incorporate here?

That was the director Darren Lynn Bousman’s vision for the film. It’s within the canon of Saw movies, but he wanted to have a really fresh take on it. So he had this concept of two things, really. One, that it was going to be contemporary but with a film noir styling to it. The second thing he wanted was to set it in the dog days of summer, he wanted the heat to almost play as a character in the movie. It’s a Saw movie, so we used a lot of dark tones, as well as a lot of muted earth tones. We stuck to burgundies, darker teals. I tried to keep the patterns quite classic. Chris Rock’s character has ties that have a very traditional 50s pattern on them. We did knit ties as well to get a bit of texture and used a lot of browns and ochres that would work to keep the palette in that mid-century style.

For one really good reference, my ACD, Kevin Barry, was like, oh, I know the exact movie—A Touch of Evil. It’s an Orson Welles movie with Charlton Heston and Janet Leigh, and it’s set on the border between Mexico and the United States. It’s black and white, but in terms of being hot and gritty, that was one we could use, particularly for the character of Boz, who you see at the beginning of the movie. We were trying to figure out, how do we open this movie in an iconic way that says this is a noir film? So for Boz, I did the straw fedora, and he’s wearing a pink linen blazer. I think one of the producers at one point was like, who does a pink blazer in a Saw movie?

Despite the different references, did any of the previous Saw films influence your design process?

The one thing we kept consistent with the Saw franchise was the concept of the Jigsaw cloak, which we modernized, but the basic elements—it’s a long black cloak with a hood, with a red lining—are the same. It’s a modern interpretation of the Jigsaw cloak that everyone knows and loves.

Was the perverse Uncle Sam villain look in the script, or did you have some creative license there?

That was one I had a lot of fun on. It was in the script, but Darren was vacillating on it a little bit, [noting] it could get really costumey. And I said to him, I’m going to give you a Tom Waits’ Uncle Sam. The jacket is one of those very cheap online Halloween store costume jackets that my textile artist went to town on with paint and wax. We did a lot of dry brushing techniques, a lot of aging techniques to make it feel very dingy and distressed. This character starts the movie, so you already get this feeling of malaise, kind of an anxious feeling. To give a bit of period feel to it, we built the waistcoat and the fall-front trousers, and then we just did a really filthy singlet underneath. The white hat was really kind of a Tom Petty reference. The hatband is an American flag tank top which we cut up.

How closely did you work with Chris Rock on Zeke’s wardrobe?

We had a phone call before our first meeting. The notes I had from talking to him were that he wanted the character to feel very real. It was just the perfect jumping-off point, because he said, ‘I don’t want to look good. I’ve hosted the Oscars twice, everybody knows what Chris Rock looks like in a nice suit. This can’t be a nice suit.’ He’d researched by talking to police officers, and he said ‘you know, they make $40,000 a year, I’m giving half of it to my ex-wife, I don’t want to look good, it has to be a real looking suit.’ So for the suit that he wears for most of the film, we went with something that was just off the rack. It was almost a washable fabric because doing research with detectives and police officers, they need their clothes to be really functional. Even if they’re wearing a suit, there’s a chance that if they go to a crime scene, they could get blood or vomit on it. And we paid attention to the cut of it—it purposefully wasn’t tailored at all.

Did you have a favorite supporting character to dress?

The main female character is Angie Garza [played by Marisol Nichols], and she is the police captain. It was fun to dress her. Keeping with the noir feeling of darker tones, she’s in a lot of black, and then we hit some darker hunter greens to give her a little bit of color. The thing I wanted to touch on with her is that even though she’s the boss and she’s in a position of power, I wanted to keep her feminine. In discussions with Marisol, that’s what she wanted as well—she didn’t want to lose her femininity just because she’s leading a police department. She really brought that in her performance, too. She commands authority without having to look like a man. So I used a lot of softer, drapier fabrics on her. She has a trench coat that you see in some scenes, but instead of it being a very structured trench coat you’d think a police detective has, it’s in a soft, drapey fabric. It gives her that extra layer, it gives that feeling of a police captain, but with a little bit more movement, a little more flow to it.

Would you consider yourself a fan of the horror genre?

I fall very low on the gore spectrum, though I love a psychological thriller. The research doesn’t bother me. If you ever looked in my Google history, it’s a mix of all kinds of things—dead bodies, what does fabric look like when it’s decomposed. In a movie like this, there is a lot of blood research because we want to know what happens when blood gets on clothing. I think we know what old blood looks like—if you have an old bloodstain on something, it’s more of a brown color. But then what happens with different kinds of cuts? There are some really cool traps in the movie that create wounds that are unique, so we had to figure out what it would look like if the skin was cut in a particular way, and how the blood would affect the clothing.

Was it also a ton of coordination with other departments to get the look right?

It’s really a group effort. Makeup would be doing the blood that’s actually on the actor. Then the special effects department does spurting blood, pooled blood. There’s also the prosthetics department, they use blood as well. The makeup department might have to consider whether the actors are going to have to put the blood in their mouth, and for us, it’s a consideration of what it’s made of and if it’s going to wash out of the clothing. What was really interesting about this movie, as with a lot of horror movies, is that we have the continuity of tracking blood and wounds. It’s a really compressed period of time and a lot of the action takes place over one day. Of course with shooting out of sequence, we had to establish what Zeke looked like after having endured different traps and rescuing people, anticipating everything that was going to happen to his clothes beforehand. So on day one, we were establishing one of his final looks and we had to think, Okay, this would happen, set where all the cuts would be and where the blood would go, and weeks later when we shot those scenes, we made sure that it would track.

TAGSCostume Designer Interviews Lionsgate Spiral: From The Book of Saw