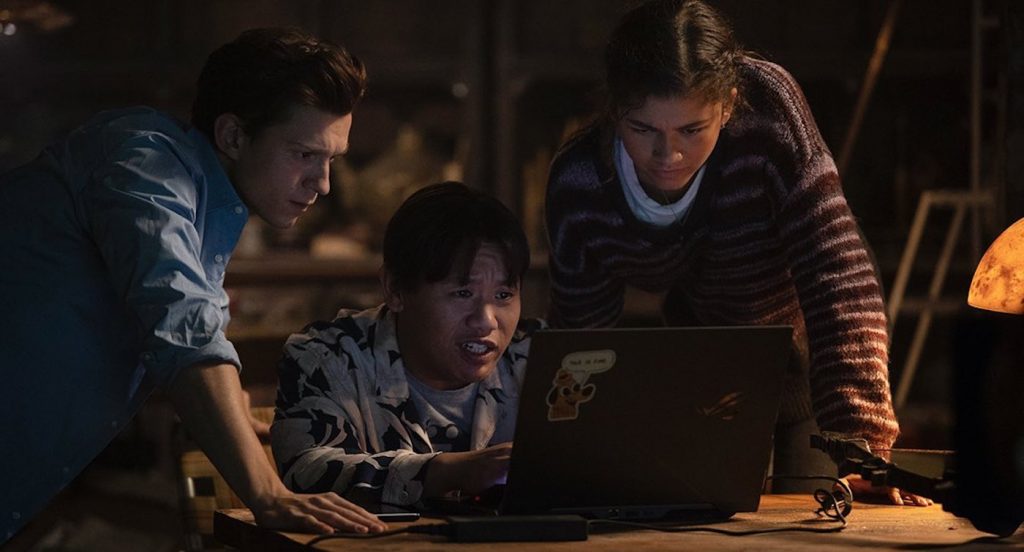 We’ve got our first look at the still-untitled Spider-Man 3 (more on the title in a moment), revealing the dynamic trio of Peter Parker (Tom Holland), Ned Leeds (Jacob Batalon), and MJ (Zendaya). The follow-up to Spider-Man: Far From Home is set to be the biggest film in the Tom Holland-led trilogy yet.

We’ve shared all the news up to this point that has made Spider-Man 3 sound like something director Jon Watts and his writers Chris McKenna and Erik Sommers have been dreaming about for years. Leaving aside the rumors that former Spider-Men Tobey Maguire and Andrew Garfield might make an appearance (!!), it’s already been confirmed that Benedict Cumberbatch’s Doctor Strange is involved. And considering that so, too, are Alfred Molina’s Doc Ock (from Sam Raimi’s 2004 Spider-Man 2) and Jamie Foxx’s Electro (from Marc Webb’s 2024 The Amazing Spider-Man 2), clearly there’s some multi-verse magic going on here. (Which means perhaps Maguire and Garfield really are making cameos).

While we can speculate all we like about what’s going to go down in Spider-Man 3, at least now we have a few glimpses from the actual film courtesy Holland, Batalon, and Zendaya. Check those out below, plus the fake titles they shared.

Batalon shared this image and one of the proposed “confirmed titles” with fans on his Instagram page:

Then Zendaya followed suit with a new image and title on Twitter:

So excited to announce the new Spider-Man title. So proud of this one…FOS is back! pic.twitter.com/gJJtUr1OFp

And finally, Holland himself shared a new image and yet another confirmed title, a direct shoutout to a Mr. Steven Spielberg, while also making fun of the new trilogy’s own use of “home” in the first two films:

Spider-Man 3 (whatever it might actually be called) is due in theaters on December 17, 2021.

For more on Spider-Man 3, check out these stories: