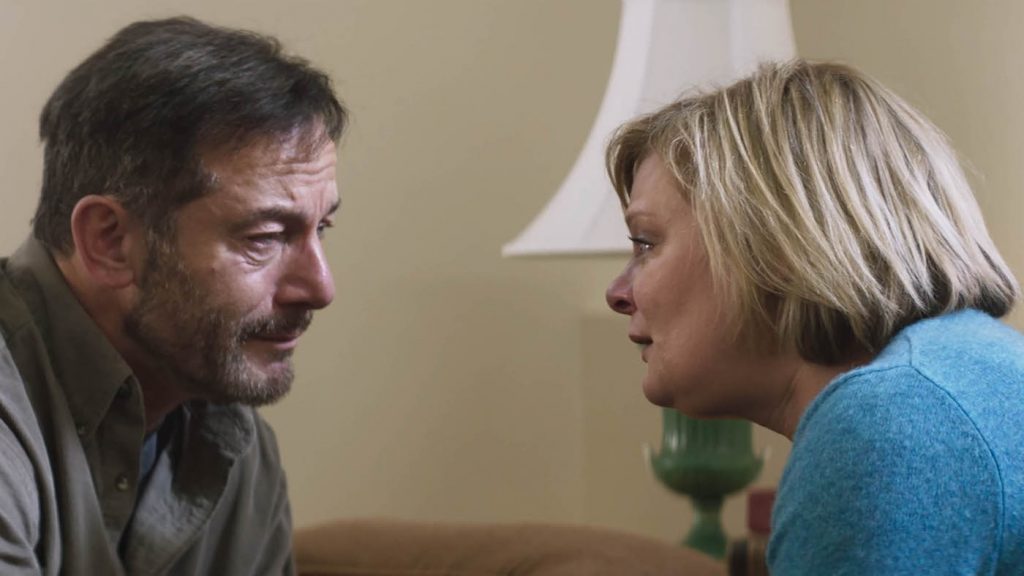 Mass, which recently premiered to much acclaim at Sundance, is the screenwriting and directorial debut of actor Fran Kranz. It’s a tense, claustrophobic, dialogue-driven film that explores the long-term aftermath of a school shooting, and essentially takes place in one room. Its success rests heavily on the shoulders of the cast, and Jason Isaacs, Martha Plimpton, Reed Birney, and Ann Dowd, who form the quartet at the center of the story, do not disappoint. We talk to Kranz, who is best known for his roles in Dollhouse and The Cabin in the Woods, and editor Yang-Hua Hu (The Public), about how the movie came together.

This is your first film as a writer-director and you began developing it after the Parkland, Florida, shooting in 2018. What was it about that incident that compelled you to tackle this particularly thorny subject matter?

Kranz: On the day of the shooting, I just was so emotional. I was overwhelmed by it. I was listening to a parent on the radio, and I had to pull over and I thought it was strange, because we’ve become somewhat used to these events, sadly. And so after getting really emotional and overcome, I thought, What is going on? And the obvious conclusion was that now I’m a parent, my daughter was one-and-a-half years old at that time. And I thought, ‘Okay, I’m feeling this differently now because I’m a parent.’ So, there was no movie at that point. It just set in motion this course of events of, honestly, somewhat obsessively researching the subject.

At what point did the idea for a movie start to take shape?

Kranz: I’ve always wanted to make a movie. But that night, I ordered Dave Cullen’s Columbine. Then from there, Matthew Lysiak’s book “Newtown,” and Åsne Seierstad’s book about the Norway massacre. It just kind of snowballed. Then, I came across these stories of parents meeting the parents of the shooter. A few examples for Columbine, and then some in Newtown. And I had always had this interest in the Truth and Reconciliation Commission in South Africa. And I had always been amazed, and even a little disturbed, by the idea of families of victims meeting with families of perpetrators. And more so, the fact that they might even be able to find closure, understanding, and even reconcile or forgive.

Did you speak directly to any parents in the course of your preparation for the movie?

Kranz: No. I’m really sensitive to all that. I’m a little insecure about it all, to be totally honest. It’s a fictional film about nonfictional events. Really tragic, real events. And the motivation has always been just focusing on the human emotion of it, and having real empathy for the parents on both sides of these stories. I think that was always on our minds in the editing process, showing respect for all four characters, and the humanity for all four characters. Not having any kind of agenda other than uplifting and shining a light on the shared humanity of the foursome.

Yang-Hua Hu, when you were pulling it all together, were you on the look-out for scenes that didn’t feel authentic?

Jason Isaacs said in an interview recently, “This is a film that’s got nothing to do with school shootings. It’s about finding a way to talk to other people, and see them as human.” Would you agree with that assessment?

Kranz: It’s strange, I’m asked, Where did this come from? And the answer is: the Parkland shooting, right? So, it’s impossible for me to say it doesn’t have anything to do with school shootings. At the same time, the journey that these characters go on, the searching for answers, or trying to find blame, all the tools that they think are necessary to get what they need out of this meeting, ultimately don’t help them. What is important in the meeting is connecting with these people and finding some sort of sense of shared humanity, but, more so, shared suffering.

The themes can relate to any kind of fractured relationship between people?

Kranz: In the United States right now it’s a really scary time where we’re seeing essentially this sort of crisis of contradiction where you have these almost two realities, and such intense disagreement. Reading about these meetings and, going back to the Truth and Reconciliation Commission in South Africa, I discovered that in order to sort of breach these divides and repair something that’s broken, you don’t necessarily have to agree. I think those are themes and ideas that of course go far beyond the event that sort of inspired it. So yes, of course, I understand exactly what Jason’s saying, but you’ll never hear me not bring up the events that inspired it.

Hu: I feel like the four characters were drowning in the ocean. They come to this place trying to grab onto something so they can survive. But then they realize, actually, the answer is always in their heart. They just cannot face it until the moment they are in the room.

And the film takes place almost entirely in one room. What are the challenges that that brings as a director and also from an editing perspective?

Kranz: No one was ever going to give me any money as a first-time director, so I was trying to figure out a one-location movie. I don’t know how Yang-Hua did it. I mean, it’s funny because obviously, like you said, the majority of the movie takes place in a room. I had the movie in my head so well, I could see it so well, except for the room. So we’ll get in the room… and we’ll figure it out. My Dinner with Andre works, so we’ll just set the camera up and we’ll point and shoot, and we’ll get there. Yang-Hua will tell you, I’m an actor and I was so naive about post-production. I thought you go to the wrap party and it’s over. And then when we got into the editing room and started going through this footage, I truly panicked.

Hu: It’s a pretty challenging film but I think this script is so good and the acting is phenomenal. We wanted something close to regular life instead of something fancy, and over-decorated. And we don’t need to necessarily see the person who is talking every time because all the people react in the room. It’s just like a balloon, an un-burstable balloon, the pressures keep increasing, creeping, you just don’t see it.

Fran, how does your background as an actor impact your style of directing?

Kranz: I knew what we had to create was this sense of verisimilitude, this heavy naturalism. You had to just be in the room and the director could never get in the way. I mean, there were things that I wanted to put in and Yang-Hua would remind me of this sort of mantra of, ‘We don’t want to get in the way, this shot feels like we’re making the choice, it just has to be about the room and what’s happening in there.’ It was important that the vehicle could run by itself. So, I tried to basically, to cut a long story short, have a very soft touch. And so I didn’t walk away from it thinking I’m some genius director. I felt like a game manager.

For more interviews around Sundance 2021, check these out: