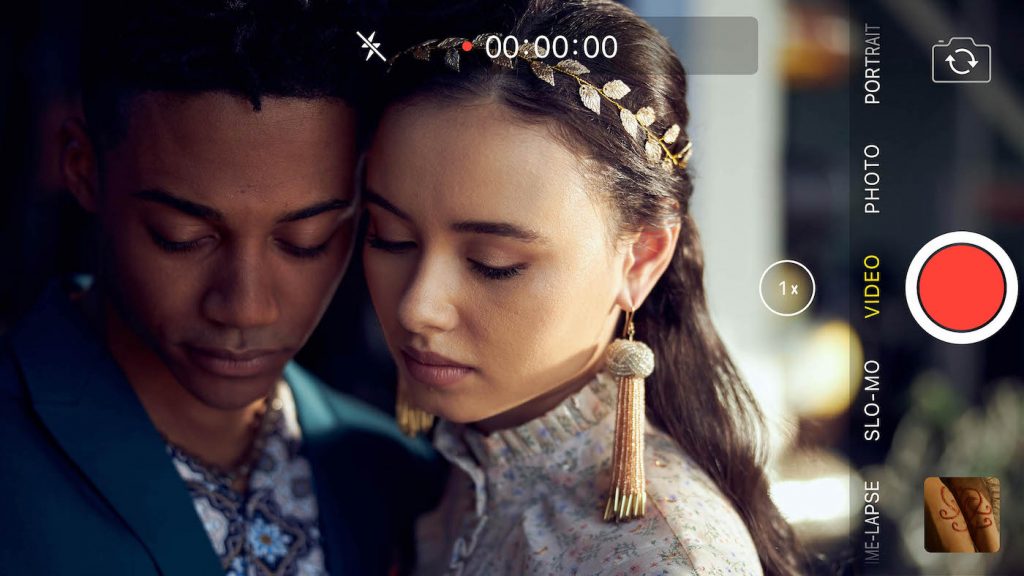 In partnership with producer Timur Bekmambetov, who is known for the innovative film style Screenlife as exampled by Unfriended and Searching, co-writer and director Carey Williams offers his feature debut with a modern and of-the-moment adaptation of “Romeo and Juliet,” R#J, told entirely through social media and smartphone screens. Using an entirely Black and Brown cast, and blending text messages and Instagram posts with timeless Shakespearian language, the film draws audiences into the story with its visually sumptuous imagery and compelling performances. The film stars Camaron Engels as Romeo and Francesca Noel as Juliet, who center a strong ensemble that helps blend high drama and selfies seamlessly.

Just after its premiere at Sundance 2021, The Credits spoke to Williams about how he crafted this inventive, inclusive take on a classic.

Much of the forward movement and perspectives in R#J are expressed outside the language from the play. How did you find the balance between traditional speeches and this new form of storytelling?

It was a trial and error. We previz-ed the film before we shot it, and we had an opportunity to see how it flowed, what worked, and what didn’t. After we did that, we did some rewriting. I tried to look at each of the scenes and pick out the Shakespearian language that was going to get across as much as I needed succinctly, and then use the modern-day vernacular to augment in places. It was a back and forth. Going in, it wasn’t like I definitely knew exactly what I would use.

This film really expresses the destructive and creative force of social media and the disparity between how we present ourselves onscreen and in real life. What were some of the discussions around that?

I didn’t want to demonize social media in any way, but I thought it would be irresponsible not to point out some of the ills of it. Romeo and Juliet were able to connect with each other through social media, which is a beautiful thing, but the balance of that is that they were getting hurt through it as well. There were discussions about it, looking at the film and figuring out how we are able to get closer to our characters and empathize with them, and what social media apps, or what amount of social media is going to help us do that, as opposed to just seeing them on FaceTime talking to each other. What is that balance? With a film like this, there’s no playbook as to how to do that, because there aren’t a lot of examples. You go in with open arms to embrace the newness of this format and this visual language, and use your heart for what feels right.

How much of these characters’ social media personas were created by the performers?  For example, Siddiq Saunderson’s Mercutio has a very subjective look and attitude, and they are reflected in his online presence.

The actors absolutely made these characters. For instance, I had talks with Siddiq about his Mercutio, and we discussed that he’s about anarchy. That’s why the name online is ‘Merc the Anarchist.’ I feel like that character was living out loud, out of the box, and he took that and ran with it. They all did. They all brought so much to their creations. They wanted them to feel honest like kids today, to have them feel authentic and grounded. We are bringing this 400-year-old story into modern day, and we’re coloring it with what’s happening in the world today. They did a great job of doing that. I just got out of the way and let them go for it. The impulsiveness of being a teenager, that hot fire that you can feel for someone, like the way Romeo and Juliet feel, comes across, but also in a way that you can believe. There were some elements we had to ask ourselves how we could do, putting it in the context of today.

The film is anchored through the music used, which I think bonds Shakespeare’s language and the Screenlife. It’s two forms of poetry coming together. What was the process of finding the right songs and building character and story through song and René Boscio’s score?

The music was very important to me, as it was a guiding force in making this film, so I picked the music. I was very hardcore about what I wanted and where. With René, I’d met him a few years ago, and had wanted to work with him. I think he’s very talented. We watched the film and talked about what I wanted, which was for him to push the envelope. In the film there’s a tonal shift that happens, where it feels very different, and that’s when it becomes more about the score. He was pushing himself and presenting options and being very thoughtful, so he definitely had his ideas that worked perfectly. There was not a lot of back and forth, because he really was so in it. For the songs, I really wanted to mash up the old and the new, like with the older hip hop and the newer tracks. Everything for me in this movie was a blending of the old and the new, and that is definitely represented in the music.

And it’s not just one genre.

I think that’s important too, because growing up as a young Black kid I listened to lots of different things. People would ask me why there’d be something on, and why I didn’t just listen to soul or hip hop. I didn’t want to be in a box. I wanted to appreciate all kinds of music, and enjoy whatever moves me. That was really important for me to show in this film. The movie is about people of color, but we have different styles of music we love, from ambient to classical and jazz to hip hop. I was very conscious of making that choice.

As a filmmaker, you have a passion for color, contrast, and line that has a sensual quality. How did you advance that aesthetic for R#J, and what kinds of conversations did you have with production designer Evelyn Ellias? Her designs are often inspired by magical realism.

We really dove into color a lot with this, and Evelyn did a great job, exampled by the party, with dramatic and complimentary colors and color saturation, making it feel so authentic and gorgeous. For the visuals, I think about Instagram. It’s very colorful, and it pops and pulls you in just from the color and contrast. I wanted this film to have a little bit of a surreal and fairy tale quality, and not be so grounded in realism, and pushing the colors would help with that. Between Evelyn’s work and cinematographer Diego Madrigal, we were able to push that and get some nice color palettes. We really wanted to expand on what might realistically be there.

R#J premiered at the 2021 Sundance Film Festival in the NEXT section. It is currently seeking U.S. distribution.

Featured image: Camaron Engels and Francesca Noel appear in R#J by Carey Williams, an official selection of the NEXT section at the 2021 Sundance Film Festival. Courtesy of Sundance Institute. Photo by Charles Murphy.