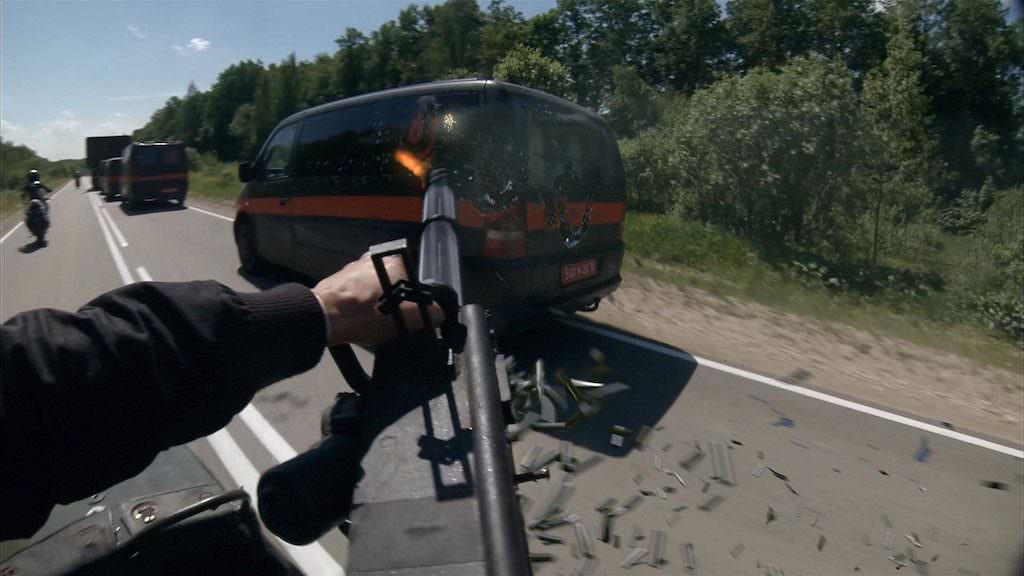 When an action film is at its best, it becomes easy to imagine yourself at the center of the action, jumping building to building, bolting down busy streets and going mano a mano with your attackers. But in the case of Hardcore Henry, the world’s first feature-length action film shot entirely in POV, that feeling of immersion is simply part of the deal.

The premise is simple: a nameless protagonist – you, that is – is brought back from near-death by a beautiful woman identifying as his wife. The caveat? He remembers nothing, not even his name (it’s Henry, as it turns out) and it isn’t long before he’s attacked and his wife is kidnapped, triggering a battle that sends Henry through Moscow with determined killer mercenaries on his tail. Aided only by the mysterious Jimmy, a strangely regenerative force of good with a penchant for cocaine and colorful deaths played by Sharlto Copley, Henry embarks on a mission to reclaim his wife.

If you’re a fan of first person shooter video games, then the imagery of Hardcore Henry might not strike you as such a surprise (think Call of Duty on some kind of amphetamine), but regardless of your familiarity with the imagery, it’s hard to make a case for Hardcore Henry being anything less than totally exhilarating. The project began to take shape when director and Biting Elbows frontman Ilya Naishuller first developed a POV music video for his aptly NSFW-titled ‘Bad Motherf*cker,’ but it wasn’t until Naishuller touched base with Wanted director (and Hardcore Henry producer) Timur Bekmambetov that the project actually began to take shape.

With last year’s wildly inventive desktop horror film Unfriended, also under his belt, it’s clear Bekmambetov has got a passion for the unconventional, and it’s clear that Hardcore Henry is a perfect fit for the courageous producer. We had the chance to speak to Bekmambetov at SXSW, where Hardcore Henry had its U.S. premiere to talk about the genesis of the project, the wild shooting process and the story behind Henry himself.

Good, good. People like the movie, which is what we need.

It was great! Saw it last night…

Were you worried about it translating for women because of the male protagonist?

No, it was surprise for all of us that some of the most excited part of the audience was girls. It’s logical, because I don’t know a girl who will not enjoy the story about a boyfriend killing a thousand people to save her. That’s a fun story. 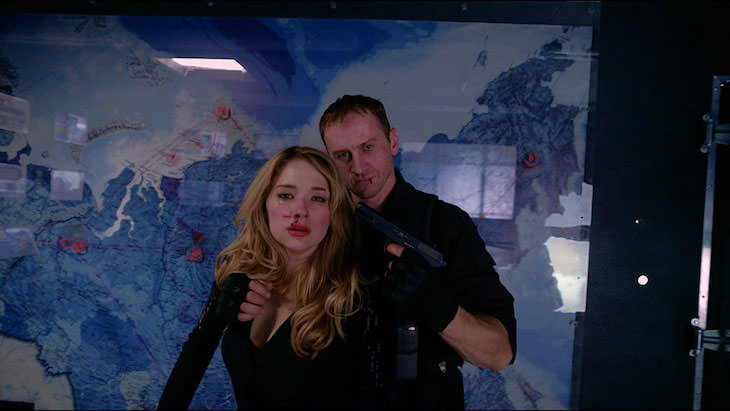 Haley Bennett and Will Stewart.

That’s great. So I didn’t get the pleasure of seeing it at TIFF, talk to me about the updates or post work we’ve been hearing about that have been done. Is there a big difference between the TIFF premiere and the US premiere?

Well, it looks and sounds great. How’d you guys get your star, Sharlto Copley?

I’d known Sharlto for a long time, one day it was like five years ago, maybe six, I invited him in Kazakhstan for a film festival, and he jumped on a plane and we spent time together. I know that he has the courage to do crazy stuff, which is what we needed for the movie. 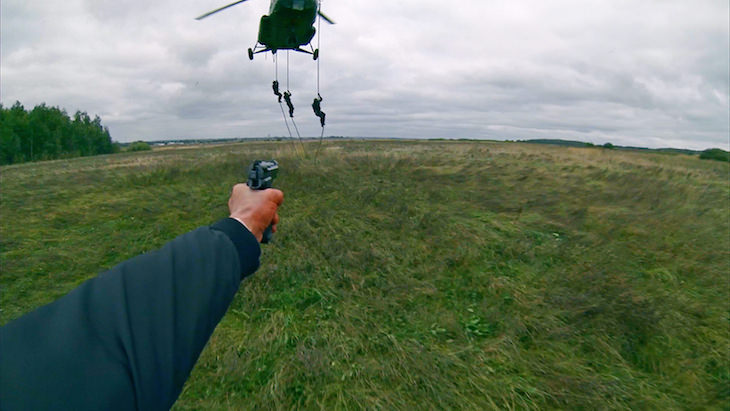 And at what point did you get him involved in the project, because it’s certainly been a lengthy journey to get here.

From the beginning. We began the movie because Sharlto agreed to the lead role. And he was one of the partners, one of the necessary elements of the puzzle, they were very good, Ilya and Sharlto together. It was important because it’s this new language, nobody knows how to make these kinds of movies, so to figure out, you need a partner, you need a team.

What was that like, shooting, because usually stunts only work if they’re shot a certain way, if you can cheat the camera a little, but if you can’t cheat the camera, I’d imagine that would seriously complicate things.

Everyone was prepared, very well prepped, but on the day of course there are new ideas. Stunt people in Russia are very brave and smart and can figure out how to do things as you go.

Obviously video games are the first immediate thought, but what were some of the visual references you guys were going for?

How did you guys go about casting Henry? Was it the same stuntman the whole time?

No, it was different. It was stuntmen who did crazy shit, and it was cameramen who was in charge to shoot dramatic scenes, and sometimes it was Ilya, when no one else knew what to do, he would step in and do it himself to find it, the spot. It was mostly three people.

Can you talk about the decision to have him not have a voice?

It’s just logical. Because as soon as he has a voice, it’s his voice it’s not your voice anymore. When you have a POV movie, he should be speechless because otherwise you will feel like he is not you. And I remember, we made a film in 2009 called 9, it also had a funny small character that was speechless.

And in terms of really getting a look at Henry, how did you decide to show his face or not?

It was for a long time a lot of debates, do we need to see him or not? As you can see, it’s a compromise. You can see somebody, but not really. You can still imagine yourself being him. 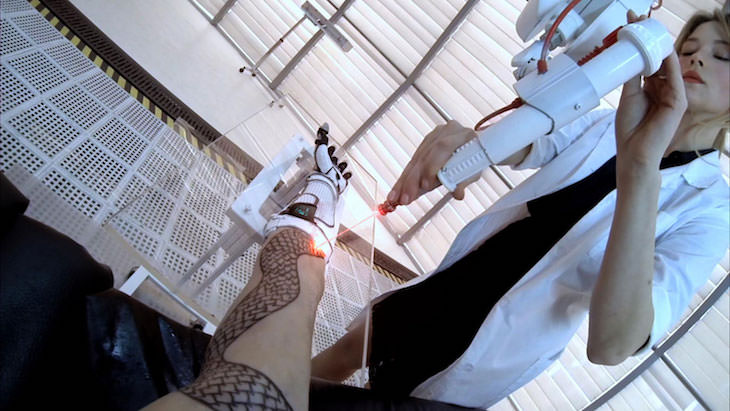 I thought it was a great middle ground. So you guys shot in Moscow, how was that to shoot such a wild film on the ground, on location like that?

It’s a city where we live and for us it’s comfortable to shoot there. It looks different, but in reality, we know it. The city has a very unique quality. It’s kind of relatable, it’s not alien, it’s an urban city, like Chicago or something, but it’s still different. And it’s really important for genre movies when you have one step toward reality and fantasy. And Moscow gives you this position where you are in a relatable environment, but there’s something weird. And the next step is your movie, the next step is your world.

The movie is really non-stop, but it’s never exhausting, it’s always engaging. How did you juggle about trying to figure out how to use moments of stillness?

The most interesting thing is the first scene is almost seven minutes, it’s a drama. There’s no action. It’s time to connect with the character before you go on the ride. It was an example of the smart storytelling. Seven minutes of just dialogue, she creates him. And then action.

Yeah, absolutely. That’s where we get to see Henry for the first time, and Henry is interesting because he’s largely a humanoid but he has these strange touches, he has these tattoos and these metal knuckles. How did you develop that look?

There’s a very cool guy in Moscow. His name is Pyotor Gorshenin, the artist who creates the prosthetic stuff. He worked with me on Night Watch and Day Watch, he worked with me on Wanted. And he helped a lot to create this movie, because he created all these realistic explosions and his hands.

You guys have smartly been staying away from selling it as a gimmick, because it’s not. But are you interested in working on another film of this type?

For now, no. We’ve made it, and we learned and it was tough and exciting, but in the future who knows?

I could see it taking off with other people borrowing the style, becoming the next found footage or whatever, which is exciting.

It certainly isn’t as easy as found footage. But I’m sure people will take it and make it interesting and unusual, but we were first.

[laughs] I can’t tell you. For the next SXSW, we’ll talk.