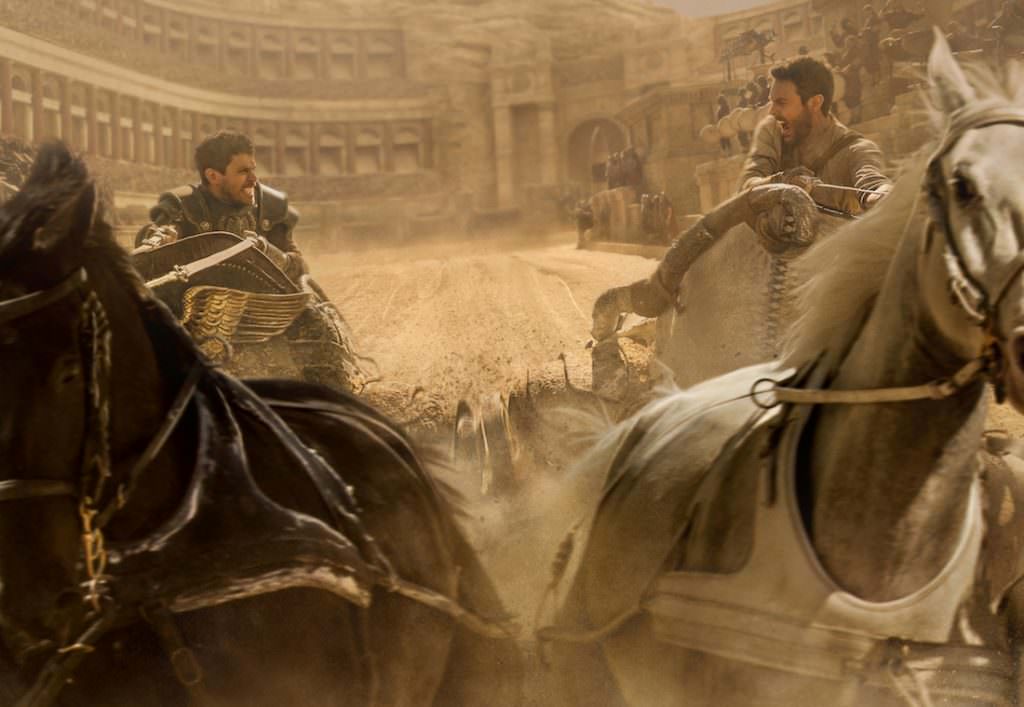 Before Timur Bekmambetov shot a single frame of the new Ben-Hur, he wanted to find out exactly what it felt like to be in the kind of four-horse chariot race that propelled its 1959 predecessor to 11 Academy Awards.

So the Russian director got behind the reins himself.

"I asked our stunt coordinator to let me ride the chariot, which was absolutely illegal because it's dangerous," Bekmambetov says by phone from Germany. "It's like being in a blender, hooves and dust flying in your face from four creatures you cannot really control. We used historically correct chariots, which are really shaky. There's no suspension. There's no brakes. It's like you're just flying above the track."

Aiming to awe audiences with a fresh staging of the high-speed chariot race, Ben-Hur, opening Friday, casts Jack Huston as Jewish prince Judah Ben-Hur. Forced by Roman soldiers to become a galley slave, he survives a battle at sea, learns to race chariots from Morgan Freeman's Sheik Ilderim, then returns home to Jerusalem for a "circus" organized by Pontius Pilate shortly before the crucifixion of Jesus. In the coliseum, Ben-Hur battles his estranged adopted brother (Toby Kebbell) in a chaotic competition featuring eight teams of galloping steeds and their barely-in-control drivers.

Bekmambetov presents the story's classic themes of revenge and redemption through a distinctly 21st century point of view. "I actually think 'Ben-Hur' is very experimental," he says. "A lot of the action scenes were inspired not by classical paintings but by YouTube videos." For example, Bekmambetov mapped out a battle sequence between Greek vessel and a slave galley ship after studying online security footage of a South Korean bus crash. And when Roman soldiers arrest Ben-Hur's family in the film, the director says, "You see them face down on the ground with bags on their heads — that's based on YouTube videos from Iraq and Afghanistan."

To capture the intensity of Ben-Hur's 10-minute chariot race, Bekmambetov and cinematographer Oliver Wood (The Bourne  Supremacy) positioned GoPro cameras in the sand for jittery close-ups of horses, wheels, dust and drivers. "I will give you a secret," says Bekmambetov, who spent 32 days at Rome's Cinecitta studio staging the race. "We used GoPro cameras not only for picture but also for sound. The microphone records a very specific type of sound that people associate with extreme sports videos of people on bikes or jumping off mountains. When you hear that sound it feels real because you think 'documentary.'"

Bekmambetov modeled the chariot race on NASCAR, Formula One and street racing  footage. "It's all about references," he explains. "We collected and selected the most interesting accidents to build this library of real-life events that I used to 'pre-vis' the action sequences with Maya software. This gave me the freedom to invent things."

Bekmambetov's previous American movies, Wanted and Abraham Lincoln Vampire Slayer, showcased his mastery of highly stylized visual effects. With Ben-Hur, he took a more subtle approach, using computer-generated imagery mainly to insure the safety of 90 horses used in the race sequence. Unlike the 1959 Ben-Hur production, which killed and injured horses by tripping them with concealed wires, the 2016 movie deployed CGI to make it look like horses were stumbling to the ground without actually putting the creatures at risk. "When we see the horse jumping onto the steps of the coliseum and going into the crowd of people — that was not really a horse," Bekmambetov says. "That shot came from video of a bull going astray. From the exact same camera angle, we just used the bull as a reference and then inserted a (digital) horse instead."

On the other hand, that really is actor Jack Huston being dragged across the dirt track after his Judah character falls off the chariot. Bekmambetov says "We want to create the feeling that everything you see is real, and we do that by creating this smart synthesis of organic and digital elements."

Bekmambetov began working on Ben-Hur in late 2012. After filming in Italy, he spent a year editing the movie, then supervised its conversion to 3D. After investing three and a half years in the project, Bekmambetov hopes his re-envisioning of ancient spectacle resonates with contemporary audiences. "I feel like 'Ben-Hur' really is about us, today," he says. "It's about terrorism, power, ego. People will either learn how to live together and forgive each other, or else we will all kill each other."