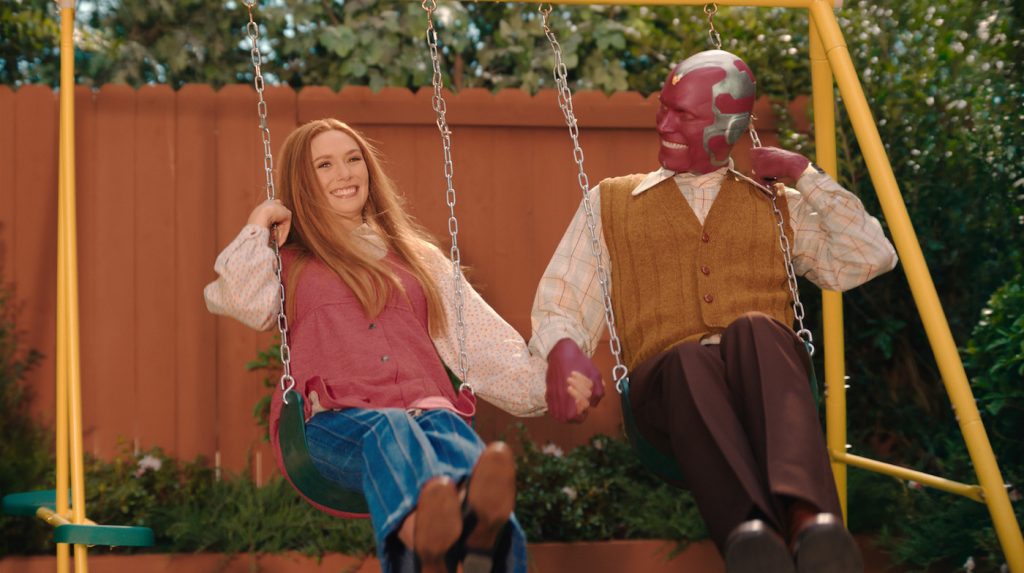 If you’ve been watching WandaVision, you’ve seen hints that the bizarre sitcom world that Wanda (Elizabeth Olsen) and Vision (Paul Bettany) have been living in is fracturing. The first three episodes of showrunner Jac Schaeffer and director Matt Shakman’s series have beautifully walked the line between comedy and drama. Wanda and Vision are somehow living inside a world of evolving period sitcoms, with all the goofy hijinx that entails (wacky neighbors, dreadful dinner parties, etcetera), while teasing in the tension that they both know something’s not quite right. Now, in this Friday’s fourth episode, it seems their sitcom world and the actual universe they belong to (you know, the one where Thanos killed Vision in Avengers: Infinity War) is about to collide.

Paul Bettany was speaking with the Lights Camera Barstool podcast, and while he didn’t make the cardinal sin of revealing any spoilers, he did say that episode 4 is going to be a gamechanger. Or, to use Bettany’s more precise phrasing, “people’s minds are going to explode.”

Who might this actor be, and how might he tie into the larger MCU? Your guess is as good as ours. Considering The Mandalorian team was able to keep the fact that (spoiler alert!) Luke Skywalker was going to make an appearance in the season two finale a secret, who knows who the WandaVision creative team have up their sleeves. Has he worked within the MCU before, but just not with Bettany? Or is this person completely new to Marvel?

Bettany also promised that the tension that’s been building up in WandaVision is about to spill over into outright conflict:

“You can expect those two worlds [of the sitcom and the outside world] to… to have more conflict. I don’t want to give away too much about the future episodes, but I will tell you this, there were more special effects requirements for our TV show than there were for Endgame.”

It sounds like this Friday’s WandaVision is going to be the episode where all hell breaks loose. We can’t wait.