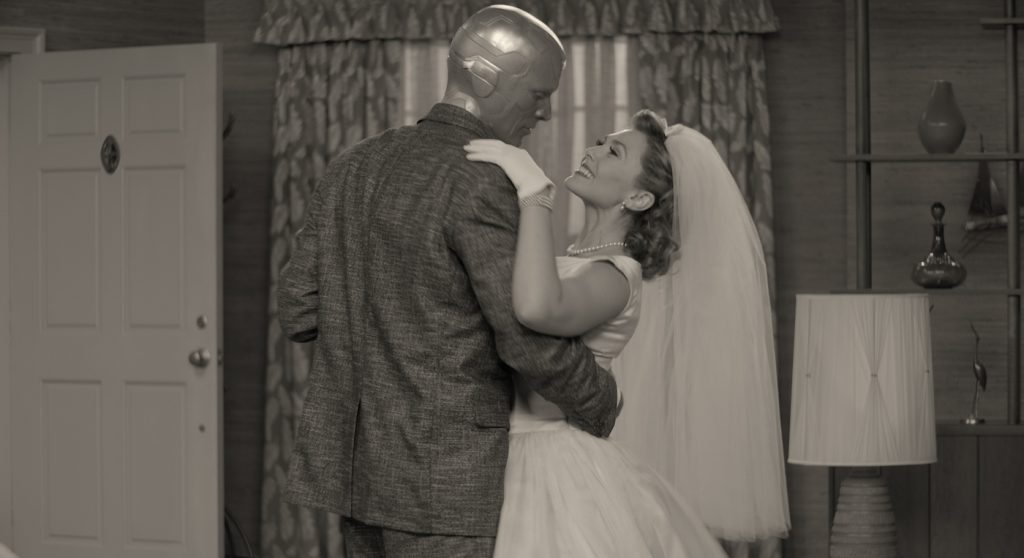 Did you watch the first two episodes of WandaVision on Disney+ this past Friday? If so, you got a peek at the intriguing new future of the MCU. Showrunner Jac Schaeffer and director Matt Shakman’s series is based on a premise that was likely a delicious challenge to costume designer Mayes C. Rubeo—create a wardrobe that befits Wanda (Elizabeth Olsen) and Vision (Paul Bettany)’s bizarre new reality—living in a universe in which they’re trapped, it seems, in an evolving series of sitcoms passed. The superpower couple will traverse decades and sartorial eras from episode to episode, while the deepening mystery of just where they are, how they might get out, and what this all portends for their future grows.

A new video from Marvel gives us a quick tour of what Rubeo and her team have pulled off. The Marvel Cinematic Universe, and now it’s small screen counterpart on Disney+, is of course filled with iconic capes, cowls, and costumes. Yet each series, and especially WandaVision, will introduce looks we’ve never seen in any of the MCU film installments. “The costuming on this is magnificent,” Bettany says in the video. “Maya as a designer is such a genius, such an artist,” Kathryn Hahn, who plays nosy neighbor Agnes, says. Olsen goes on to say that the show, thanks to Rubeo, successfully recreates the various sitcom periods decade by decade. In a sense, Rubeo designed not one show, but many. And in WandaVision, the clothes really do tell a story, one that we’ll all be trying to figure out from one outfit to the next.

Check out the video below. WandaVision episode three will air on January 22 on Disney+, and you can be sure will reveal a whole new glimpse of Rubeo’s handiwork.