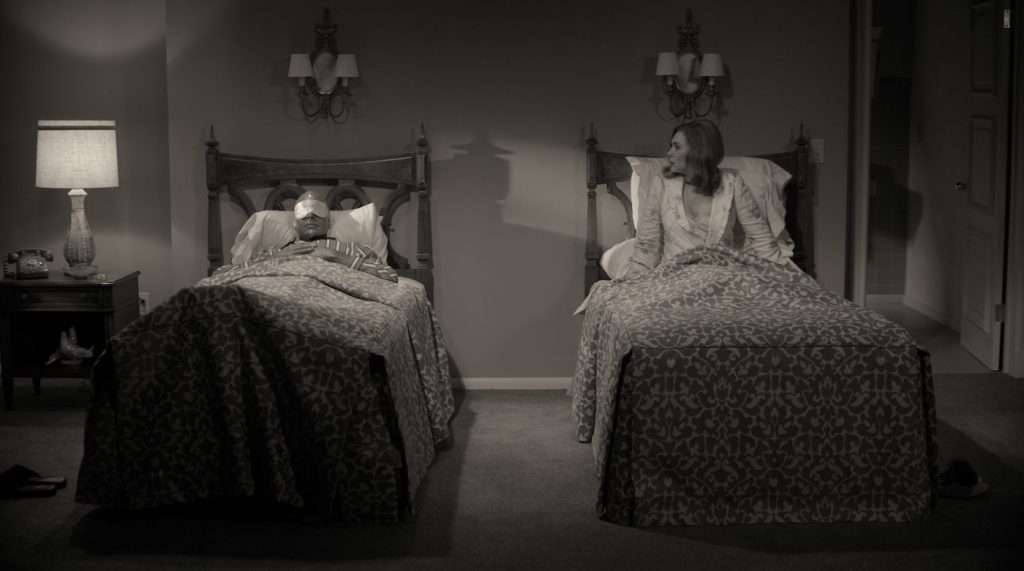 A new year is upon us, and while it doesn’t yet feel all that different from 2020—what with the pandemic, the election still going, etcetera, etcetera—one bit of proof we truly have entered 2021 is that we’re a mere two weeks away from WandaVision‘s premiere on Disney+. WandaVision will be the first Marvel series to make it to air since the pandemic upended production schedules and release dates, and a new trailer reminds us that this Jac Schaeffer-written, Matt Shankman-directed show promises a very unique viewing experience. It’s also come to light that the series will boast original music from the Frozen songwriting juggernauts Robert Lopez and Kristen Anderson-Lopez.

“WandaVision is such a cool, strange, one-of-a-kind project,” said Lopez in an official statement. “When the director, Matt Shakman—an old friend from my college days—pitched it to us, we didn’t have to think about it. We loved the bright feeling of American sitcoms mixed with the deep sense of unease the story had, and it was a really inviting challenge to help set that tone.”

“I grew up in the ’80s watching shows from every decade on the networks all day long,” said Anderson-Lopez in the same statement. “Episodes from I Love Lucy, Brady Bunch, and Family Ties shaped who I am and how I move through the world. So this project was a dream come true.”

The series will deploy these two hugely gifted songwriters for a very unique blend of classic Golden Era sitcoms and the superpowered drama of the Marvel Cinematic Universe. The series finds Wanda Maximoff (Elizabeth Olsen) and Vision (Paul Bettany), the beloved superhero couple who were so cruelly parted forever by Thanos in Avengers: Infinity War, somehow living in a sitcom suburban idyll, complete with floral wallpaper and wacky neighbors. While we’ll find out just how it’s possible Vision has returned, we’ll also see where the future of the MCU is headed—WandaVision, and all the other upcoming Marvel series heading to Disney+—are all directly connected to the larger MCU. Hence characters from the MCU appearing in Wanda and Vision’s sitcom realm, including Teyonna Parris as the older version of Monica Rambeau from Captain Marvel, Kat Dennings as Darcy Lewis from Thor, and Randall Park as FBI Agent Jimmy Woo from Ant-Man and the Wasp.

WandaVision premieres on Disney+ on January 15. Check out the new trailer here:

For more on WandaVision and other Disney+ series, check out these stories: