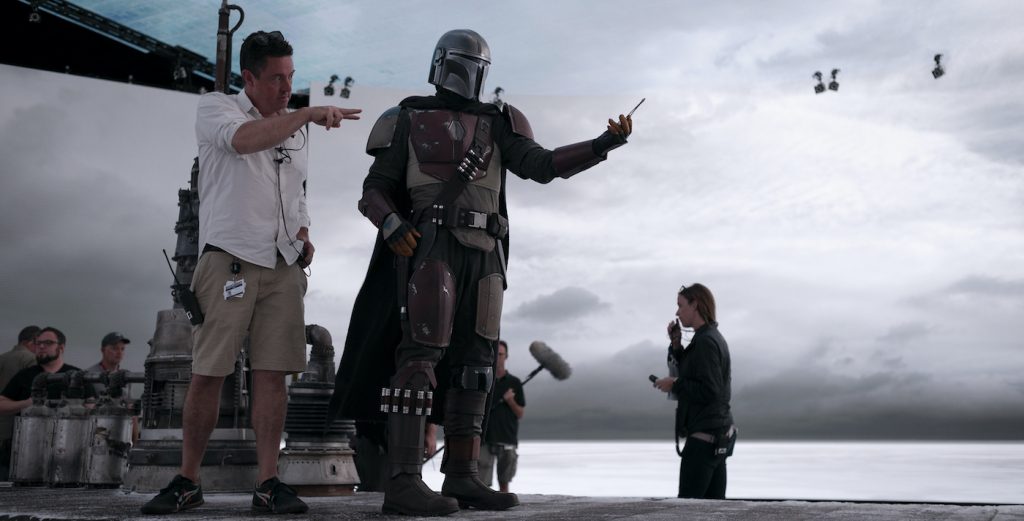 Best of 2020: DP Greig Fraser on Harnessing Cutting-Edge Tech in “The Mandalorian”

This interview was originally published on August 26, 2020.

The Emmys have spoken: The ballots are in, and among the most-nominated shows was Disney’s first live action Star Wars series, The Mandalorian.

One big reason for that was cinematographer Greig Fraser, a previous Oscar nominee for his work on Lion, and now sharing an Emmy nom with Barry “Baz” Idoine on the Disney+ series, in particular its gunslinging penultimate episode, The Reckoning.

The nomination, though could be considered a stand-in for the whole season, on which Fraser also shares a co-producer credit, in part because of his already storied work in helping series creator Jon Favreau set up the LED-based “volume,” as certain 21st century sound stages have come to be known, where around half of the series was shot. Meaning that locations all over the galaxy were realistically rendered, in real time, on this futuristic, but here-right-now, version of a green screen. And also meaning that what used to happen only in post can now take place as you’re shooting it, with backgrounds moving as the camera does, thanks to an amplified Unreal gaming engine making all the necessary calculations, giving you, as Fraser says, “all that beautiful parallax you’d get in real life.”

You also get a technology that Fraser reckons “will eventually play a role in everything we do. It could be tiny,” he allows, even if it’s a view through a window on a traditionally built set, but “it’s going to be incredibly pervasive.”

And while he allows that, pervasive as it may eventually be, “the technology didn’t drive the story, the technology was helpful in telling that story,” that same breakthrough tech, or perhaps “the magic, the background on the LED screens,” also dictated some additional choices on gear side, like a large frame ALEXA camera, with Panavision Ultra Vista glass. “I think this was the first show they’ve been on,” Fraser says of the lenses. “You get all the beauty of anamorphic and all the depth.”

But Fraser wasn’t always able to be there to wield those cameras, since he “needed to go off and do Denis’ movie,” by which he means the already highly-anticipated adaptation of Dune from director Denis Villeneuve. So he “needed someone to fully understand” how to shoot in this new environment, and that someone turned out to be Idoine, “who came in halfway through my preproduction period.” He notes that DPs rarely collaborate with their counterparts on series episodes, it’s usually just directors. But in this case, he needed someone who could be a quick study in how to “space things in the volume.” But it wasn’t just Idoine (who was also second unit DP on Rogue One, which was Fraser’s entree into the Star Wars galaxy), who was an early collaborator. With so much rendering in cinema now, and particularly on a show like this, “visual effects is now heavily involved in preproduction.” Indeed, the show’s visual effects team was also nominated for an earlier episode.

As for early involvement, Idoine “came on halfway through my preproduction,” since Fraser “needed someone to fully understand what was going on. “We figured out how we can space things in the volume,”  Fraser says, and why a sunset, for example, was in a certain place. All of which were part of the loads that go into the volume.

As for “loads,” think “programs,” showing the various alien worlds and topography, and how they were lit, whether via LED sunsets, or otherwise. As for the nominated episode, Fraser considers that he “might have been responsible for some of what was loaded in the volume,” in preproduction, but “Baz was all over” them, as DP, when it came time to shoot.

And whether virtual sunrise, or sunset, to wax a little “Fiddler”-like, Fraser says the whole reason something like Mandalorian can be shot so efficiently for how sumptuous and exotic it looks is that “you’re not scheduling to shoot in one direction in the morning.” Magic hour, he notes, can last as many hours as you need it to.

But the question about the live rendering  isn’t whether it’s “good for the DP? Or is it good for post?” Ideally, Fraser says, “it should be good for both.” And to a much larger degree than in other VFX-heavy opuses, “what goes on the screen is hopefully able to be in-camera final.”  Also, by minimizing set up times, “it allows directors to spend more time with their actors on set.” Even if that set is ostensibly located several light years away.

“I continue watching the growth of virtual volumes and virtual filming right now,” Fraser says.  “Once the cap was opened on the bottle, the genie would be out, and it would be unstoppable. I’m not saying it’s going to replace real filming, I don’t think it should.  Nothing quite replaces mother nature, but this augments mother nature. We still need our Lawrence of Arabia.”

Meanwhile, when we talked to him, Fraser was in London, waiting to embark on another epic, namely The Batman.

Fraser allows that he’s done a bit of filming during the pandemic. “An Apple commercial, and another commercial about a month ago,” he says.  These were smaller crews, of course, but he found that it wasn’t important simply to wear masks, but to constantly wash your hands and clean your equipment. “It’s just been common sense. It’s what all the smart people have been saying.”

Including, perhaps, some of the smart people working on “volumes,” at the galaxy’s edge.

Featured image: Cinematographer Greig Fraser the set of THE MANDALORIAN, exclusively on Disney+.