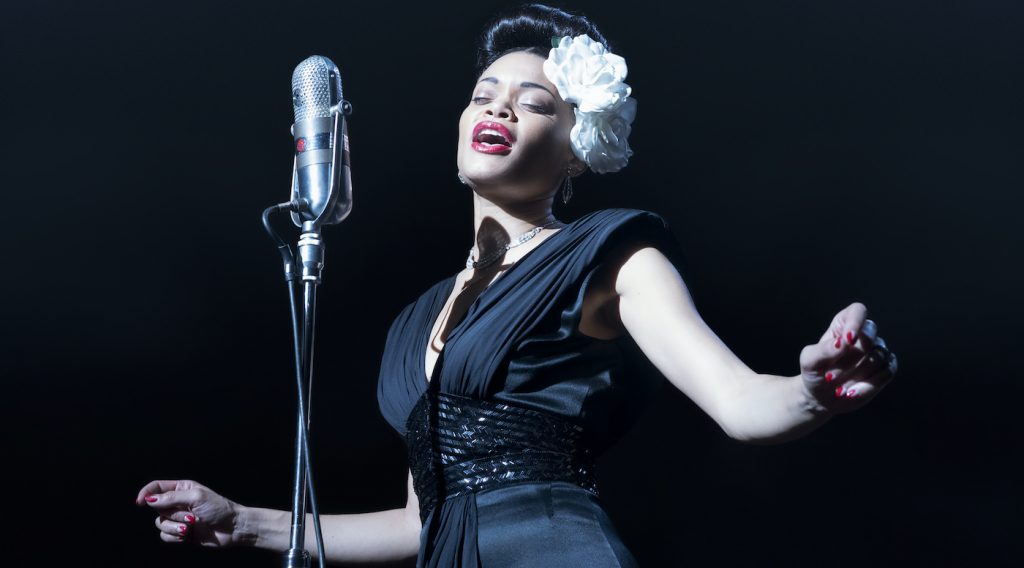 The Stage is Set for “The United States vs. Billie Holiday”

Growing up in Baltimore as a young Black boy, one of my fondest memories of my beloved city is Lexington Market. I recall as a young boy walking with my mom past the famous indoor market and down West Lexington Street and seeing this beautiful mural of local black artists. One of the artists included in this mural was the legendary Billie Holiday. I was in awe of her beauty. As I got older, I was introduced to her music, and then to Sidney J. Furie’s biopic Lady Sings the Blues, starring Diana Ross as Billie. The film not only introduced me more fully to Billie Holiday’s story, but it showcased her childhood in Baltimore. I was hooked. This brings to me Lee Daniels‘ (The Butler and Precious) upcoming film The United Stated vs. Billie Holiday—needless to say, when I learned about its existence, I was ecstatic.

Grammy Award Nominee Andra Day will play Holiday, a tall order for any young performer, even one as gifted as Day. Considering the last performer to take on Holiday was Audra McDonald, who gave a spellbinding, heartbreaking performance on Broadway in “Lady Day at Emerson’s Bar and Grill” (earning McDonald her sixth Tony Award), the bar is set high. The Broadway production was eventually filmed at the Cafe Brasil in New Orleans and broadcast on HBO (McDonald earned an Emmy nomination for this, of course). Yet if anyone can reach, or even clear that bar, it’s the hugely talented Day, whose debut album “Cheers to the Fall” was nominated for Best R&B album in 2015. The album’s main single, “Rise Up,” was also nominated for a Grammy, for Best R&B Performance.

Daniels’ film will take a different approach than both the play and Lady Sings the Blues. Rather than following Holiday’s career as a jazz singer, The United States vs. Billie Holiday follow Lady Day (as she was affectionately known) in the early days of her career, and will be centered on the Federal Department of Narcotics obsession with her. The Department, which was led by Harry Anslinger (played here by Garrett Hedlund), targeted Holiday for years. Anslinger hired Jimmy Fletcher (to be played by Moonlight‘s Trevante Rhodes) to track her and set her up in a sting operation after she was admitted to a hospital for issues related to her liver and heart, issues that would ultimately lead to her death. Fletcher’s alliances, however, became wobbly in the presence of the magnetic Holiday. The film will also highlight the Federal Department of Narcotics’ quest to imprison Holiday in retribution for her political songs like “Strange Fruit” and her dedication to the Civil Rights movement.

Daniels directs from a script produced by Pulitzer Prize-winning playwright, screenwriter, and novelist Suzan-Lori Parks, based on the book “Chasing the Scream: The First and Last Days of the War on Drugs” by Johann Hari. This story hits close to home for Daniels on several levels—he has been open about his personal struggles with drug abuse.