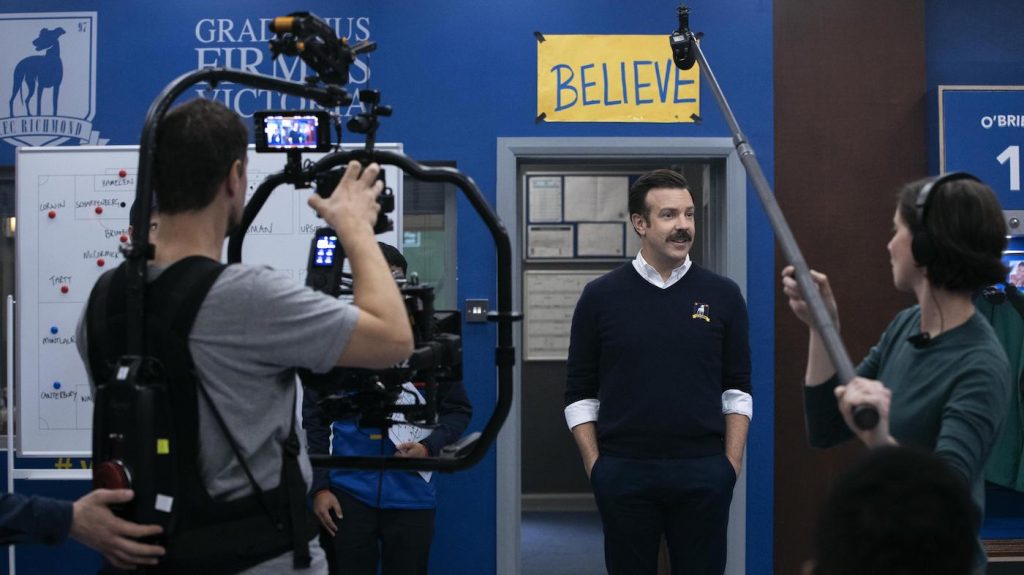 Ted Lasso began life nearly a decade ago, in what must now seem like a more innocent time, as a character in a series of promos for NBC as they embarked on coverage of Britain’s Premier League. That character, created and portrayed by SNL alum Jason Sudeikis, is an American football coach, hot off a miracle season with a perpetually struggling college, who is hired by England’s mythical AFC Richmond squad to coach, well, football.

In the expanded series that has become one of the first breakout hits for Apple TV+, Lasso doesn’t realize that he was initially hired by the vengeful owner, Rebecca—played by Hannah Waddingham—to deliberately fail, in order to exact revenge on the philandering, wealthy ex-husband from whom she bought the club. And who appears to have loved the team more than he did her (along with numerous young ladies whose pictures keep appearing in the tabloids).

From this setup, the avuncular Lasso embarks on a modernized Connecticut Yankee in King Arthur’s Court sort of adventure, the homespun American bringing his own particular wisdom to a somewhat restrictive Kingdom (or Queendom), yet also able to take in nearly as many life lessons as those he usually imparts, however inadvertently.

Part of that innocent time in which the character was spawned stems from the fact it was pre-pandemic, and now certain realities have intruded on how the adventures of the redoubtable coach navigate post-production, particularly on the audio side. How can one do the ADR and looping, for example, if actors can no longer travel to the studios to do the recording?

What helped, according to supervising sound editor Brent Findley, was that “principal photography was in the can before the Ides of March.”  Following that, “the first ADR sessions were innocently and naively normal.”

Sort of like Coach Lasso! But then came those “Ides,” in the form of a novel new virus, and suddenly people couldn’t travel easily, much less lounge around in the tight confines of a recording studio. At the same time, while suddenly faced with setting up ways to finish dialogue recording remotely, Findley didn’t want to “put an asterisk next to everything (then) five years down the road say ‘remember Covid? That’s why the sound was terrible.’”

His pandemic-prompted response was kind of a multi-tiered approach, depending on what needed to be recorded.

For various members of the AFC Richmond squad, when he needed yelling during gameplay, he “asked them to go in their backyards and shout in their iPhones.” Which was better than shouting in their living rooms since it’s “tough to make inside sound like outdoors.”

For more specific scenes, with lines requiring actual dialogue, Findley would often first scope out the actors’ homes via a Zoom meeting, looking to find which spaces might be most acoustically suitable for recording, whether a closet, an office, or something else.

He would then send them mics, usually the USB-compatible Apogee MiC Plus, along with “a stand, and an isolation filter (a curved, sound-absorbing panel) to help if the room has some reflection in it…and then we would use their device for the actual recording. iPhones,” he adds,” are also really good digital recorders,” which dovetails nicely with the network the show is on.

He’d instruct the at-home recordists “to choose uncompressed audio (for) higher resolution audio. Make sure you shut off that compressed audio!” The Apogee, in this case, is “doing all the work,” with its own built-in converters. Otherwise “compression kicks in when you’re using the onboard mic.”

Waddingham did some work of her own, in rerecording a version of Let It Go her character sang at a karaoke night. “She has a killer voice,” Findley says, “and she’s very particular. They gave her the option to listen to the final edit,” and then decide if she wanted to redo any of it. “She actually sang the song again in her bedroom,” and “some of what she did (there) is in the show. Not all of it (but) I challenge anyone to find the difference.”

Sudeikis had a similar setup, with an Apogee that Findley sent him, though there are no reports of him doing Disney covers in his bedroom. Somewhat surprisingly, Arlo White, the real-life sports presenter —if we’re sticking with the locally authentic argot—who plays himself on the show, and announces the matches, also got an upgrade.

White was already set up for podcasting at home, and while his own rig was fine “eight out of ten episodes,” when he’s chatting on the sidelines with fellow announcers, when it came to his “full-on play calling” for critical and plot-advancing matches, “his podcast microphone couldn’t handle it.” His ADR work, in other words, was all over but the shouting; hence the additional gear.

With the news that the show has been renewed for not just one, but two additional seasons, perhaps not only set but even produced, in a post-plague future, does Findley see any permanent changes in how his own end of posting might work, now that he’s figured out how to network his way to quality sound?

He’s quick to note that the benefits of the studio include “the soundproofing and the professional equipment,” where the onus is not on the actors to try and cover up background sounds of barking dogs, moving garbage trucks, leaf-blowing gardeners, etc.

But he also allows that if they’re shooting in New Orleans, for example, “and the nearest stage we can find is in Baton Rouge…if we only need 2 -3 lines from them, we know we can make it work,” by which he means, no one has to send a car for someone for a long distance, now that they have other options.  “We collapse the radius of what is required to get a pro studio involved,” he says, even waxing seasonally that “someone can go home for the holidays, to a small town, (and) we don’t have to hold anything til they’re back in New York or LA. The anxiety is lifted on how to get someone who isn’t in a major market.”

And if the character of Ted Lasso is about anything, it’s about lifting anxiety, which is likely why there’s been such a strong response to the show, and its nimbly recorded sounds, in such an anxiety-producing era as this.

For more on Apple TV+, check out these stories: