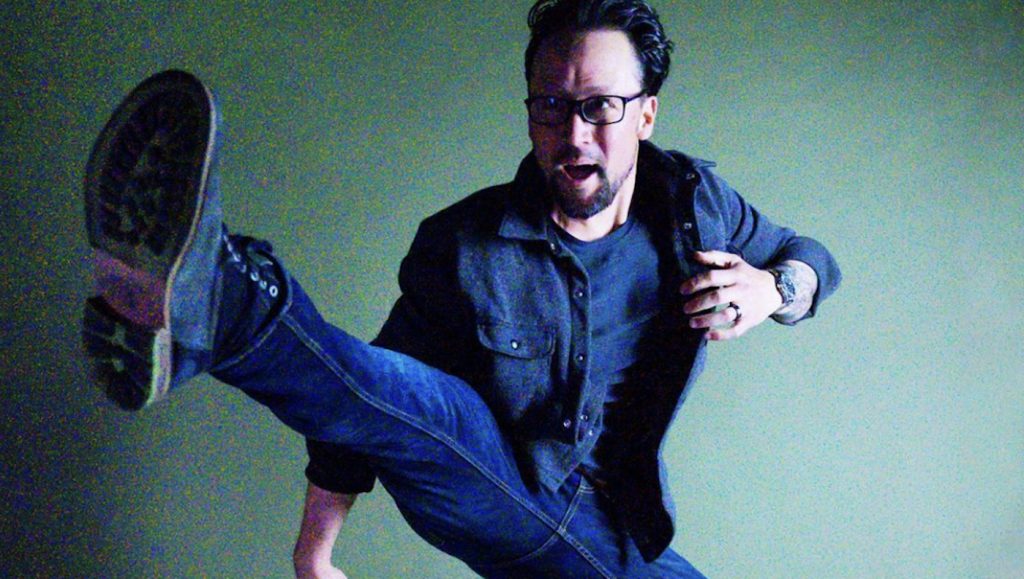 Emmy-nominated stunt coordinator Hiro Koda staged Stranger Things‘ surreal smackdowns. Raised in Alabama, where his father settled after emigrating from Japan to establish Yukoshai Karate schools throughout the south, Koda earned a black belt as a child. At age 12, a family friend took him to the set of Lethal Weapon. Koda recalls, “I saw guys doing stunts and it was so cool, I thought, ‘This is what I want to do for the rest of my life!'”

Five-time nominee Koda, who won his first Emmy in 2013 for Supah Ninjas, had planned to spend his summer in Atlanta choreographing fights for the fourth season of Stranger Things. Six weeks into production, the show shut down due to the pandemic. Speaking from his home in Colorado, where he lives on a 10-acre spread with his wife (stunt coordinator Jahnel Curfman) and four kids, Koda talked about staging fights for ferocious Sheriff Hopper, levitating drooling Billy into the air and coaxing monstrous scares from a man dressed in a red bodysuit and silver hat.

David Harbour’s character Sheriff Jim Hopper often suffers from depression but this season, he’s pretty ferocious. How did you define his fighting style?

I think of Hopper as a barroom brawler, an old-school, street-fighting cop. I met with David and spent time in prep working through the moves, talking about his character, and figuring what he likes to do. Then I could design stuff that’s going to make him look the most badass.

With Hopper, there’s a lot of punching and head butts—nothing too fancy.

That’s what I love about choreographing fights. Hopper’s completely different from Andrey Ivchenko’s Grigori character, the heavy. Grigori’s a well-trained military man, so we used more martial arts for him and developed a different style. Hopper has three big fights with Grigori, starting small and built up to the big finale next to the laser weapon machine.

In general, how do plan your fight choreography?

I like to shoot live-action previs during prep so I’ll bring in my stunt doubles, rehearse the action, and film it. If we don’ have access to the actual set I build something similar. Then I cut the action together—sometimes I’ll even add music—and present that to the directors for their approval. It’s a huge tool for getting everybody on the same page and it also helps when I’m directing second unit because I already know exactly how the sequence should look. A lot of times, my previsuals looks a lot like what we shoot on film.

How did you put together that surreal Fun House sequence, where Hopper headbutts Russian thugs in a hall of mirrors filled with punching bags hanging from the ceiling?

The Fun House set was actually already built so we pre-lit that for ourselves and shot the previs there. David’s very agile and he loves it when he gets to fight with stunt doubles because he knows he can go all out. For this sequence, David was like, “This room is crazy so let’s have fun with it.” The guy who played the henchman was a stunt guy, playing himself, so there was no double needed. They just tore that room up.

In Season 3, Dacre Montgomery’s Billy character has turned into a demonically possessed zombie. During a tense sauna scene, Eleven uses her telekinetic powers to levitate Billy and hurl him into the wall. How did you pull that off?

The sauna sequence was one of the most challenging things we did. Dacre was shirtless, so we had to figure out wire rigs to fly him around and a harness that would lift him in the air. We slammed Billy’s stunt double into what looked like a brick wall, but that was made out of foam material, like hard rubber. When you add the sound effect and sell the hit with some overlap from Dacre, it looks like he crashes into that wall really hard.

The actors do a good job of selling the stunts.

Eleven’s intensity amplified that scene. And Billy had visual effects veins put on him, but his veins were popping out for real. He was so gung ho, sweating and slobbering out of his mouth. I have to give these young actors props because they’re very intense, but they also have to remember their dialogue, perform the action, and throw all of that together.

When Billy smashes through the wall and lands on the ground outside, that’s a stunt double?

Yes. The sauna interior was built on set, and then our stunt guy jumped through this breakaway wall and we picked him up hitting the ground on the other side, no pads. He’s just a very tough stunt guy named Caine Sinclair.

The Mind Flayer monster terrifies the kids, but in fact, it’s a CGI construction created in post-production. How did you choreograph fights with this creature that’s not actually there in real-time?

The visual effects team led by Paul Graff developed the Mind Flayer monster and brought in one of my stunt guys who wore this spandex red suit and a silver helmet. They give him long extension arms and put up him on a platform where he was able to interact with the cast and give them eye lines. Also, that silver ball gives out lighting cues so when they put the CGI creature in there during post, we could mesh it all together seamlessly.

The music, sound effects, and VFX boost the impact for the final cut, but when you’re shooting the raw footage, everybody relies on their imagination?

The Duffer brothers and the director Shawn Levy play loud music and get all the actors excited about the scene to the point where you believe that a stunt guy in a silver suit really is that monster. We also created these rigs to fly people around, so having all those elements working together creates a vibe that everyone feels on set. It may look funny if you’re not there the whole time, but when you see the final product with the crazy monster, it’s fun to realize that it all started out with a performance by my stunt guy.

You moved at age sixteen from Alabama to L.A. where you landed stunt work on some of Roger Corman’s famously low budget action movies. What was that experience like?

They’d shoot an entire feature film in two weeks! Sometimes there was no stunt coordinator but just a bunch of guys figuring out what we needed to do. Me being brand new, I trusted what everybody decided on: “Okay, let’s do it!”

Did you ever get hurt?

I do have injuries I’ve carried with me. I had a pretty bad motorcycle accident where I ripped my leg open. I have pain in my back, two knee surgeries. It’s a pretty dangerous job so I always quadruple check to make everything’s as safe as possible. The beauty of what I do now as a stunt coordinator is that the action I throw at people is stuff that I’ve done myself. I have 30 years of experience so I know the best way to do the stunt and how it’s going to feel.