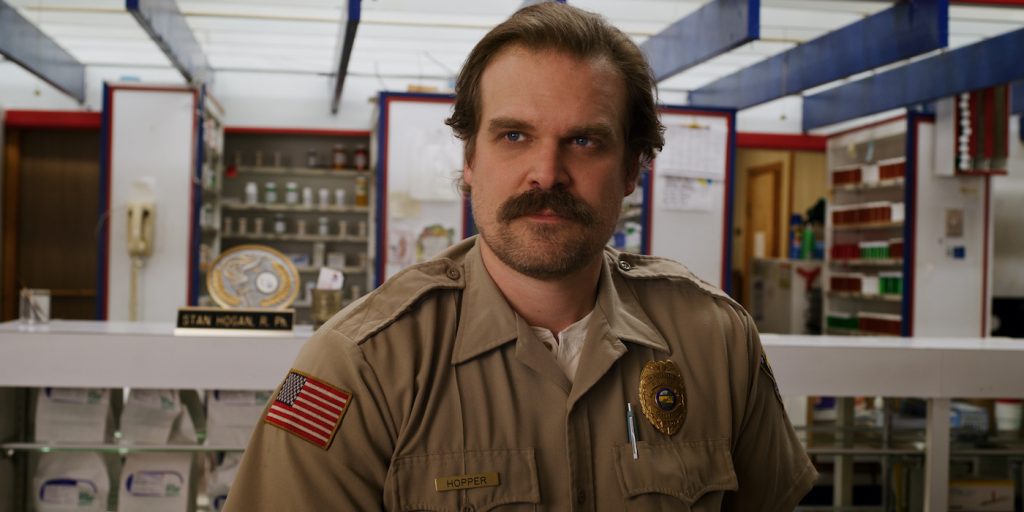 At the end of Stranger Things‘ epic third season, it appeared that Hawkins Sheriff Jim Hopper (David Harbour) had paid the ultimate price in order to save his beloved Joyce Byers (Winona Ryder) and the rest of Hawkins from a nefarious Russian plot. Granted, Harbour’s one of the series most beloved characters and a mid-credits scene seemed to imply the courageous grump might still be alive. Yet we couldn’t be certain—until now. Netflix has released a new season 4 teaser, and it reveals that Hopper lives.

The new teaser takes us outside of Hawkins, Indiana—way outside—to the snowy climes of Mother Russia. We’re in the wasteland of Kamchatka, per the Duffer Brothers. We appear to be in a Russian prison camp, where Hopper labors next to a bunch of other prisoners on a railway. Hey, at least he might lose some of the donut weight! Hopper might have new look (no hair), but he’s among the living, quite a feat considering it looked as if he was obliterated in the explosion that was supposed to close the portal to the Upside Down.

Not only do we have a new teaser, but the Duffer Brothers also released a statement to prep us all for season four:

We’re excited to officially confirm that production on Stranger Things 4 is now underway — and even more excited to announce the return of Hopper! Although it’s not all good news for our “American”; he is imprisoned far from home in the snowy wasteland of Kamchatka, where he will face dangers both human…and other. Meanwhile, back in the states, a new horror is beginning to surface, something long-buried, something that connects everything….

Season 4 is shaping up to be the biggest and most frightening season yet, and we cannot wait for everyone to see more. In the meantime — pray for the American.”

From Russia with love,

Stranger Things 4 has no set release date yet. As for Harbour, you can see him in Marvel’s upcoming Black Widow.