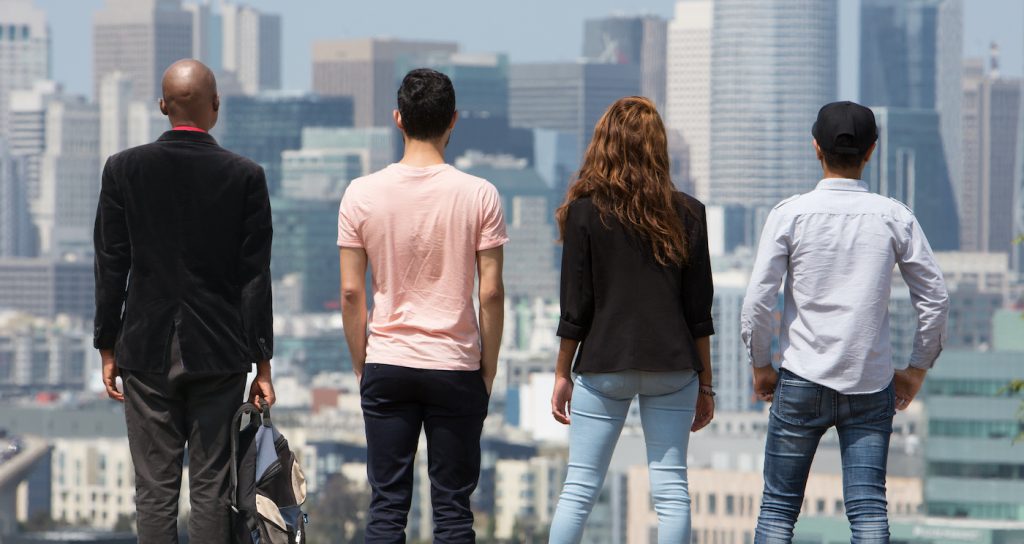 “Unsettled” Looks at LGBTQ Refugees Seeking a Home in America

June celebrations, even virtual ones in this pandemic year, commemorate the birth of the modern LGBTQ liberation movement and the progress made over five decades since Stonewall, from marriage equality to the recent Supreme Court ruling protecting LGBTQ rights in the workplace.

But in many countries outside the U.S., LGBTQ rights mean only the right to survive.

San Francisco-based filmmaker Tom Shepard, whose many credits include the award-winning Scout’s Honor (2001) about the struggle to overturn the anti-gay policies of the Boy Scouts of America, wanted to understand better the stories of LGBTQ refugees fleeing places where brutality against LGBTQ people is commonplace.  His new documentary Unsettled: Seeking Refuge in America, which premiered June 28 on PBS’s World Channel then streams for free on pbs.org and worldchannel.org, follows four LGBTQ refugees and asylum seekers who faced persecution in their homelands before resettling in San Francisco.

“Most Americans don’t know this story,” says Shepard. “They understand there is a refugee crisis and might understand numbers and scope but they’ve never met a refugee.”

The film intimately introduces viewers to four of them — Subhi Nahas, a gay Syrian refugee who survived death threats from Islamic terrorists; Cheyenne Adriano and Mari N’Timansieme, a lesbian couple from Angola who battled violence and harassment from their family and neighbors; and Junior Mayema, a gender non-conforming gay man who escaped brutality the Democratic Republic of the Congo — and traces their struggles to make new lives and remain in the United States.

It was 2014 when Shepard first approached a Bay Area organization that assists refugees about making a film but he was rebuffed. “They were very protective of their clients. LGBTQ refugees go through trauma if not torture,” he says. So Shepard volunteered with the group for six months. He learned more about the complex issues facing refugees and asylum seekers. He connected with them personally, including Nahas and Mayema, and gradually earned their trust. He later met Adriano and N’Timansieme through their lawyer who was helping in their efforts to be granted asylum through the American immigration courts.

“As a gay man, I saw the fast acceleration of LGBTQ rights over 20 years of making films,” Shepard says. “But [there’s a] dissonance between that and what’s happening in some places in Africa and the Middle East. There was a feeling of complacency, even here in San Francisco. You have refugee rights in one corner and LGBTQ rights in another are they are not talking to one another.”

One of the most compelling sequences in the film highlights a seminal moment for not only one of Shepard’s subjects but for the world. Subhi Nahas became the first gay man ever to testify before the United Nations Security Council when, alongside Ambassador Samantha Power, who served the United Nations from 2013 to 2017 under President Obama, he delivered eloquent testimony about the persecution he faced daily as a gay man in Syria.

While all refugees face hardship, the stakes are higher for LGBTQ refugees, says Shepard.

“Going back decades, resettlement in the US was always based on family. A family would flee a war-torn country and, if they came to the Bay Area, would immediately be connected to a community center, a mosque, or [with] others from their country,” he said. “Not that it was easy but there were strong mechanics in place to get families a toehold. If you are a gay Iraqi and you come to the Bay Area, probably the last people you want to see are other Iraqis. That puts LGBTQ [refugees] at much higher risk for depression, isolation [and] PTSD from their backstories.”

Unsettled is also in many ways a portrait of San Francisco, which has a long and rich tradition of welcoming anyone fleeing oppression or conformity. Although still welcoming, San Francisco is now one of the most expensive U.S. cities. The film shows how all four refugees struggle to find housing and a means to survive there.

“I grew up in Colorado Springs. It was very conservative; the religious right had a stronghold while I was in high school,” Shepard says. “I fled to Sand Francisco and at that time, the mythology of San Francisco being an ‘emerald city’ was still true. I could get an apartment in the Mission for three hundred dollars with roommates. I could find my tribe as a gay man and as a filmmaker. That has changed; that whole ‘Tales of the City’ feel of the character of San Francisco, all that has changed. It’s one of the most expensive cities. How can a queer refugee live here on a refugee benefit of three hundred and thirty-five dollars? It’s really difficult now to break in here even for middle-class people. Those issues came to the forefront in the film even though I didn’t expect it.”

The plight of LGBTQ refugees is more critical since the Trump administration has severely curtailed the number of refugees allowed into the US.

“Since we made the film, there is more infrastructure and more awareness of what [refugees’] unique needs are particularly in the settlement world. The irony is that Trump has cut the refugee cap since he took office,” says Shepard. “The U.S. used to take about 100,000 refugees a year by the last year of Obama’s administration. Now it’s been cut between 75 and 80 percent. People are more aware; there are more volunteers but the number coming to the US has been reduced to a trickle. Then add COVID to it and the travel bans around COVID and it’s really down to almost nothing.”

Yet the United States continues to be a beacon of freedom to people like Subhi Nahas, Junior Mayema, Cheyenne Adriano, and Mari N’Timansieme—if only we can live up to their dreams.

For more of our Pride Month coverage, check out our conversation with Disclosure director Sam Feder about the depiction of the trans community in film and TV, our talk with director Daniel Karslake on the shifting battle for LGBTQ equality in For They Know Not What They Do, and director David France on the terror facing the LGBTQ+ Community in Welcome to Chechnya.