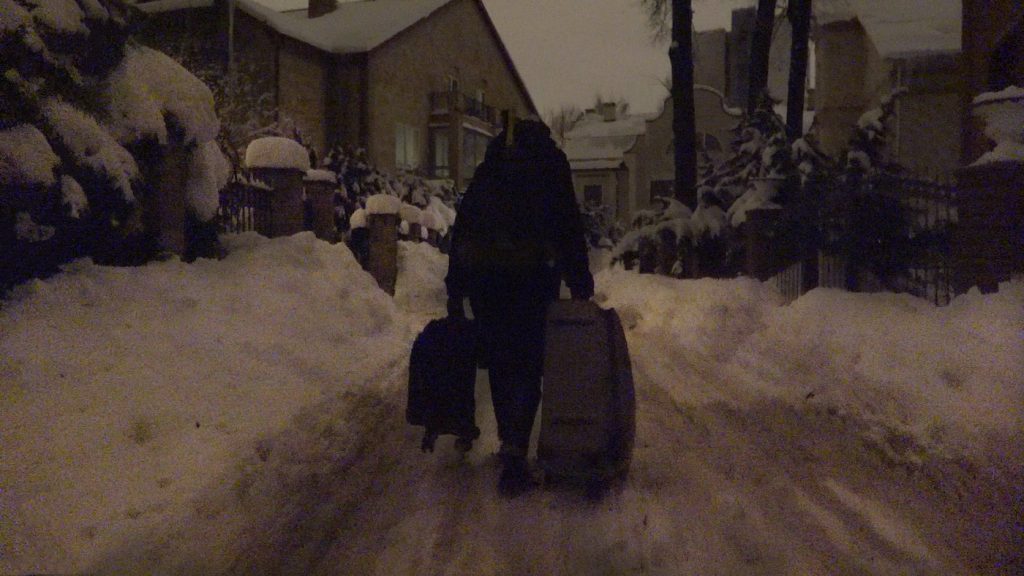 Oscar-nominated filmmaker and former investigative journalist David France has a new documentary, Welcome To Chechnya, debuting on HBO June 30th, which has already won multiple awards on the film festival circuit. His film reveals the ongoing danger to LGBTQ Chechens targeted for persecution and death in a campaign to ‘cleanse’ the republic. France follows the activities of heroic activists, and profiles the people they hope to rescue out of harm’s way, requiring a new technique of ‘face doubling’ to keep the refugees safe. He also had to film entirely in secret, and at great risk. We spoke to France about his experience making Welcome to Chechnya, which sheds light on human rights violations that must be stopped. This powerful documentary should call people of conscience around the world into action.

You had to use guerrilla filmmaking in order to create this film. What was involved?

The first rule that we had was making sure no one knew we were filmmakers. I was working on the ground, mostly with Askold Kurov, my Russian producer and main cinematographer.  We shot most of the film on a consumer camera and shot it in such a way that it would not be possible to know we were doing that. We were hiding the camera and using deceptive measures when we were filming. Any time we went into public was a risk that somehow would reveal the identities or locations of people who were in hiding. In some of the instances, we were posing as tourists, like when we were shooting in airports, which isn’t allowed in Russia. During the extraction in the film of Anya, from Chechnya, I was posing as a rich American tourist, and I had two phones with me. One I was using to shoot the extraction, and the other I had filled with video of tourist spots inside Chechnya.

You used a new technique to protect those at risk in your film, replacing 22 subjects with those that volunteered their faces for face doubling. How did you find those faces?

We recruited most of them from Instagram, where we looked for people who posted activist statements about Chechnya, and LGBTQ asylum and refugee rights. We asked them to lend their faces as an act of activism. We made our film in total secrecy, so we brought each one of them into the studio, and asked them if they would keep our secret, and what we were proposing for them. They all signed on with real eagerness. They wanted to do something that actually made a difference in the lives of Chechens, and this gave them that opportunity.

Dr. Thalia Wheatley and Ryan Laney were instrumental in making the film a reality since the face doubling was essential to keeping your subjects safe. What were their roles?

Ryan Laney is a major VFX supervisor from LA, with major credits on blockbuster films. He was so excited about doing a film that would actually allow him to put his powers and his creative vision on something this meaningful. It was a great leap for him because at first he wasn’t convinced that he could do it. It was his idea to appropriate this technique, and turn the idea behind deep fake technology on its head, and use it for good in this way. He somehow found a way to do it where it’s never been done before. This is a feature-length film shot at 4K, shot under less than ideal circumstances, often running, with the images bouncing around on the frame, and yet he was able to build this algorithm that could follow these individuals, while using the faces of the activists, these face doubles who had volunteered in New York, to track those actions.

Were you concerned it would be hard to follow for the viewer?

We wanted to make sure the approach itself wouldn’t be distracting to the point of making viewers uncomfortable with the image, or unable to read the humanity in the individual. Dr. Wheatley is an expert in what’s called ‘the uncanny valley.’ She teaches at Dartmouth, and I asked if she could help us understand if we were doing the right thing. We gave her the five leading approaches we’d been working with and asked if she would enroll students in a study of the various approaches to gauge their emotional reactions to the individuals. We used one clip, that we altered in different ways, to see which ones made them feel more discomfort than others. What we used in the film was the surprising leader of the pack. We felt we had science on our side, so we had Ryan begin his painstaking work, which took him 10 months.

You also placed cameras inside the safe houses.  It must have given refugees some power back to tell their own stories. What struck you most about what they filmed?

I was struck most by the footage that was shot by the people in the shelter who did not agree to let me tell their story. We had about a 70% agreement rate in the shelters, but some, for one reason or another, wanted to stay out of what I was shooting.  Still, many of them, with the cameras left behind, told their own stories in very moving ways, mostly by casting a silhouette shadow of themselves on the wall, shooting that silhouette, and leaving behind their narrative. In case something happened to them, they wanted the world to know about their experiences. It was a declaration of their own truths, in a way I hope was meaningful for them. It was certainly meaningful for me to watch those clips and hear those stories.

Part of the danger for queer Chechens is the expectation by the government, as directed by Chechnya’s president Ramzan Kadyrov Kadyrov, that their families kill them.  Can you speak to that?

The campaign that was first conceived by Kadyrov and his henchmen became broader as the months went by. It came to include political and security force pressure, on family members of queer Chechens, to carry out the so-called honor killings within their families. This is as part of their shared responsibility, in Kadyrov’s worldview, to continue his campaign of what he calls blood cleansing, this atrocious idea that it might be possible to round up and execute every LGBTQ Chechen and thereby somehow purify the ethnic race. Family members in Chechnya are often willing to carry that out. If not immediate family members, it’s a clan-based society, so each family may have thousands of members, and any one of those male relatives could potentially do the work. It makes it incredibly dangerous for the LGBTQ people who are left behind in Chechnya because this campaign is ongoing.

Beyond watching the film and sharing the importance of what is happening, what can people do in the US right now to help stop these atrocities?

The best thing anyone can do is to support these organizations financially. The work that they’re doing is incredibly expensive. The security protocols, the efforts to go into Chechnya and hide these refugees in a network of safe houses, tending to the medical needs, often paying for surgeries and psychiatric care for people who have weathered incredible hardship, it’s all expensive. All the work they do needs our help, which you can do by going to our website, where there is a button for donating to them.