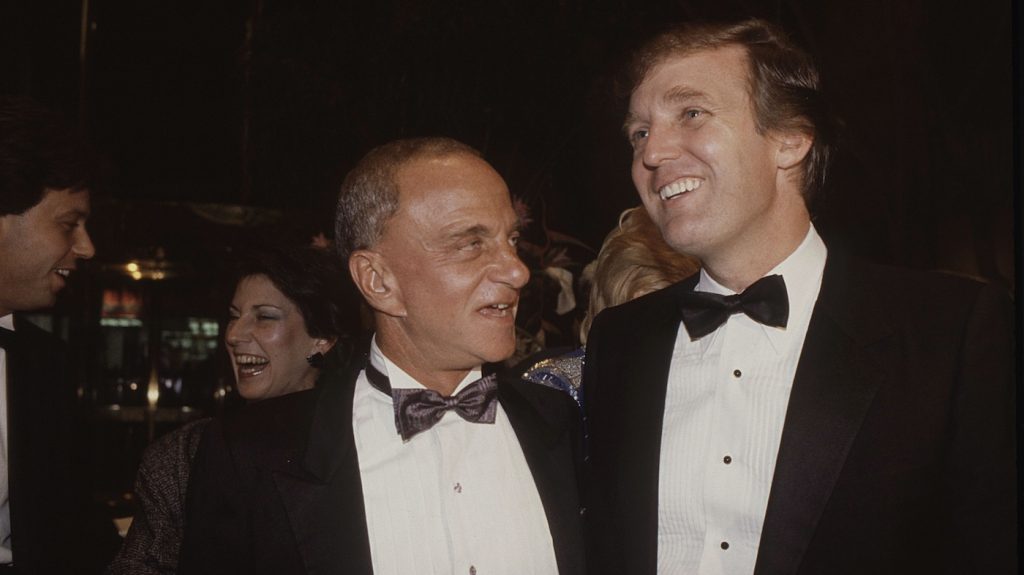 After Ivy Meeropol directed her powerful and deeply personal HBO documentary Heir to an Execution (2004) about her grandparents Julius and Ethel Rosenberg who were executed for alleged espionage in 1953 with prosecutor Roy Cohn leading the charge, she felt she’d finally put the subject behind her.

“I thought for years that a film about Roy Cohn was in order, that it should be done and I couldn’t believe no one had done it. But I really didn’t want to,” says Meeropol. “I went through a lot to make Heir to an Execution. It was really painful; it was a struggle and I came out the other side feeling like, ‘I have put this to bed. I said what I needed to say and I felt I contributed something to our legacy and to how [the Rosenbergs] will go down in history.’ And I had so many other stories I wanted to tell.”

Then came 2016 and the election of Cohn’s client and protégée Donald Trump.

“The day after Trump was elected, I could not believe what had happened. I was bereft and upset. Then I started talking to my producing partners and said, ’It’s time to do it.’” Meeropol’s documentary Bully. Coward. Victim. The Story of Roy Cohn had its world premiere at the 2019 New York Film Festival and is now airing on HBO.  Showing how Cohn’s blatant hypocrisy and well-honed tactics of deny, deceive and distract are also Trump’s modus operandi makes the film both historical and chillingly relevant.

“I knew the hypocrisy was there, of course, once I learned while I was in college that Cohn was gay and died of AIDS [in 1986 at age 59, though Cohn denied he had AIDS right up to his death],” says Meeropol.

On a visit to the AIDS Memorial Quilt, Meeropol just happened to see the panel that an anonymous quilter had made for Cohn. “That’s where the film’s title comes from,” she says. “I was struck by that and it stayed with me all these years. I wanted to focus a part of the film on his life in the closet. But I did not know that his hypocrisy extended to his actively working against the gay rights bill in New York City all those years. [The film] builds to that revelation because that mirrors my realization, too — that one of the most openly gay closeted people would go on Larry King saying he opposes gay rights and women’s rights. This is who Trump is as well: someone who condemns people and denies them rights while living with impunity himself.”

Once Meeropol committed to making the documentary, she had to deal with the fact that there was already another Roy Cohn film in the works, Matt Tyrnauer’s Where’s My Roy Cohn? which was released in September.

But Meeropol was convinced her film would offer a rare glimpse at another side of Cohn, one that she discovered after she “started digging around” in Provincetown. Meeropol’s family has a house in neighboring Truro so Provincetown, she says, was “a second home.” Meeropol’s digging led her to author Peter Manso, who had once bought a house in the town’s East End with Cohn and Norman Mailer. Manso shared with the filmmaker tapes of a never-aired interview he’d done with Cohn as well as a thick file of Cohn’s unpaid bills. “It opened up a treasure trove of incredible material,” says Meeropol.

“It wasn’t until I met Manso that I felt [this film] had something more to contribute. My family story was not enough. As a filmmaker, I wanted new material and Cohn’s own voice,” she says. Once Meeropol homed in on the rich Provincetown material, “HBO came on board pretty quickly,” she says.

Besides Manso, the film provides interviews with other Provincetown residents including director John Waters, who shares stories about seeing Cohn at cocaine-fueled dinner parties at Provincetown’s famed Front Street restaurant and with popular performer Ryan Landry who was a hustler once hired by Cohn. There are numerous archival photos of Cohn partying with scores of pretty young men which came into Meeropol’s possession when production had all but wrapped.

Meeropol had been trying without success to locate the buyer of a box of Cohn memorabilia from a major New York auction house. When her film was already in the color correction stage, someone telephoned casually asking if she’d be interested in a bunch of candid photos of Cohn. It was the kind of miraculous coincidence that happens with documentary, she says. “We immediately go to the New York apartment, we scan everything, and we swapped out all the [original] photos for these polaroids of Cohn with men, on boats…you want that intimate stuff.”

Cohn’s zealous and manipulative prosecution of the Rosenbergs as “atomic spies” in order to further his career led to their execution — though it’s now acknowledged that Ethel was likely innocent and that Julius’s espionage had little to do with atomic bomb secrets. The Rosenbergs left two young sons, Ivy’s father Michael, now 77, and Robert, who were adopted by Anne and Abel Meeropol. Much of the film’s intimacy and power comes from this deep, personal connection including scenes from the recent Broadway revival of Tony Kushner’s award-winning play Angels in America with Nathan Lane in the role of Cohn.

“I saw it when it was first on Broadway with F. Murray Abraham playing Cohn. I was so moved by it. It affected me and stayed with me,” says Meeropol. “Works of art around my family’s story such as Angels in America or E.L. Doctorow’s ‘The Book of Daniel’ are how I connected to it emotionally when I was younger and expanded my understanding and interest to want to know more.”

Meeropol wanted to make Heir to an Execution for personal reasons but also because she had begun to realize that more and more “my generation didn’t know who my grandparents were.”

Not only was history being forgotten, but it was also being repeated. “Trump is now the reason to keep beating that drum,” she says.