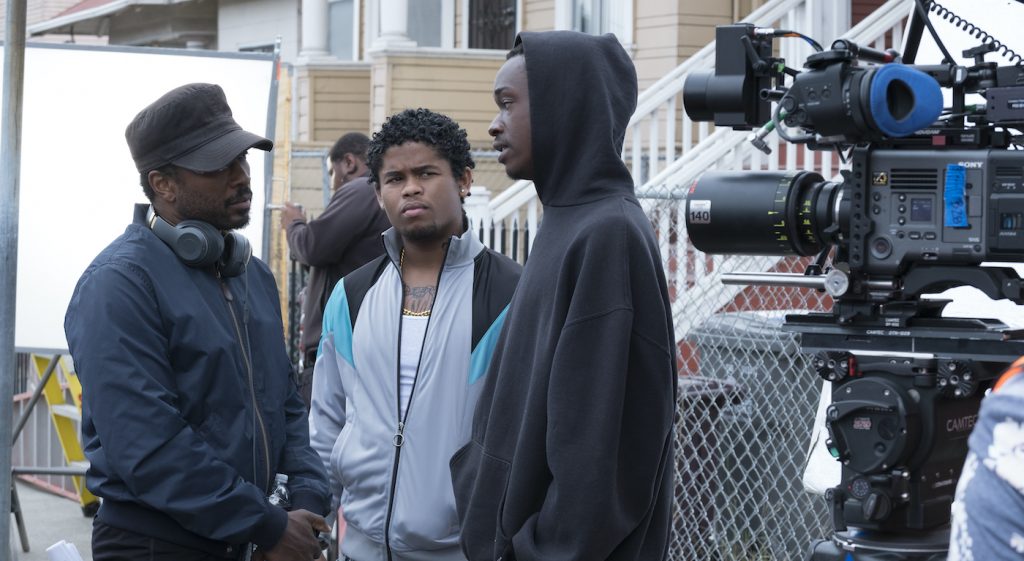 “Great stories have great characters, and the key to great characters is empathy,” says writer-director Joe Robert Cole, whose latest film, All Day and a Night, is now streaming on Netflix. “Every film, television show, or story that I work on, I approach from character first and let that lead the way.”

All Day and a Night is a young black man’s coming of age drama, but it’s so much more than that. It’s a crime narrative, a prison story, and a character study about how, when someone grows up in a violent gangland, they will inevitably, as either the criminal or the victim—or sometimes, both—become immersed in said violence, usually ending up behind bars, or worse, dead. What Cole does, as both writer and director, and which has scarcely been done before, is to tell the story from the point of view of Jahkor, the main character, who kicks off the film by murdering multiple people. But as the movie flip-flops between the past, showing Jahkor growing up in Oakland, including severe beatings by his father, and the present—Jahkor incarcerated—we begin to see why Jahkor has become the man he is, and why he’s chosen—or been forced to choose—to do the things he’s done.

For Cole, getting beneath Jahkor’s rough edges was the only way to effectively tell this story. “For me, trying to step away from my ego and get under the skin of a character allows me to more effectively get to the root of their hopes, dreams, desires, and frailties. Rarely are stories told from the perspective of a character like Jahkor (played by Moonlight‘s Ashton Sanders), and the journey I wanted to take the audience on was this journey of humanizing this character, this man we would often see as unredeemable. And to do that, my approach was to try to peel back the layers, to show that he’s the sum of his parts. Really getting people to walk in his shoes as much as possible.”

Cole, who lived in Oakland as a young man, drew on personal experiences in similar environments when crafting this story. “The film is inspired by things I’ve seen throughout my life and folks I’ve met and spent time with,” he says. “My grandmother used to say that our family didn’t grow up with a silver spoon in our mouths, so that was always a part of who I am. And then the final touchpoint for me, without getting into too much detail, was hearing about someone who had murdered someone who was close to me and finding myself feeling sorry for that person [who had committed the crime], based on the systemic conditions our society casts the poorest among us to live.”

He wrote All Day and a Night in three weeks. “The script goes more backward in time chronologically than the actual movie does,” he says. “So I was inspired by Memento, believe it or not, because of how it told a crime story going backward in time. You know, I had so much to say, it just poured out of me.”

Cole co-wrote Marvel’s game-changing Black Panther with director Ryan Coogler and was nominated for an Emmy for his work on American Crime Story: The People v. O.J. Simpson. He’s well-regarded for fleshing out characters who have been underrepresented or turned into caricatures in the past. As a kid playing make-believe, he even turned all of his favorite superheroes from white characters to black ones.

Before Black Panther and his other notable successes, Cole took part in Marvel’s esteemed writer’s program, which he says was “pivotal” in his career. “The way the program worked is this: they’d give you a character, you’d come up with an outline, then they’d greenlight you to the script.” He was honing his skills alongside actual executives, getting notes straight from the top. “I was learning what it takes to get a script to production, and learning wish fulfillment, and understanding how to put action beats in and have them be character moments. All of these kinds of things that help Marvel films be so successful, and as a writer that helps you to grow. I was able to have a wonderful experience and be able to make a living while doing that.”

Working alongside people like his Black Panther co-writer and director Ryan Coogler, who he says is “extremely humble,” has shaped the way he now is as a director, and how he crafts his sets.

“The people I’ve worked with at Marvel are successful, smart, good listeners, and good collaborators. And so you see the effect that has on the people around you, and how they rally to be a part of what those folks are working on. I know how I like to be treated as someone who’s working, so I try to be respectful and appreciate everyone I’m working with.”

To that end, the vibe while filming All Day and a Night was kept light. “This wasn’t a sad set where people were glum,” he says. “It was a dense, 33-day shoot, so people were working. We were rallying around this story. Everyone was pouring their hearts into what we were doing. And that expanded to the city of Oakland. They were extremely helpful and excited about us being there and telling this story. It was tough, but it was a feel-good experience.”