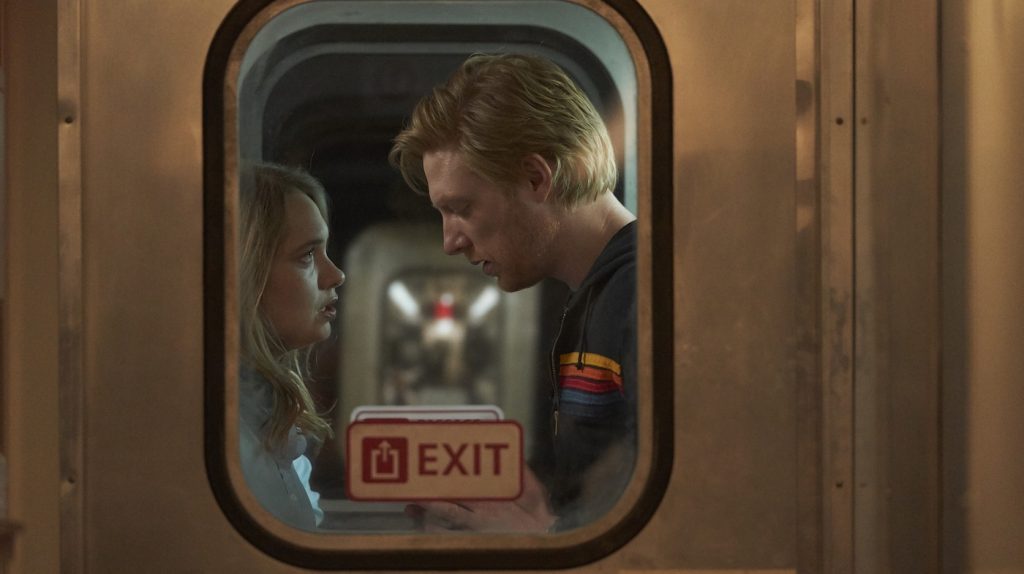 Merritt Wever won a comedy Emmy for Nurse Jackie, picked up a drama Emmy as the rifle-wrangling pioneer in Godless and last year wowed critics for her empathetic turn as a sex crimes detective in Unbelievable. Now she’s mixing it up in HBO’s black-humored thriller Run (it premiered this past Sunday night, April 12). Job one for cinematographer Matthew Clark: capture the chemistry between Wever’s bored housewife Ruby and Domhnall Gleeson, who plays her shifty ex-boyfriend Billy, as they take an erotically-charged cross-country train trip to points unknown.

“Merrit’s really interesting because she can be madcap funny, but sometimes she’s intensely dramatic, and the same thing with Domhnall,” says Clark. Teamed with creator Vicky Jones (Fleabag), executive producer Phoebe Waller-Bridge and director Kate Dennis (The Handmaid’s Tale) Clark, best known for his Emmy-nominated camera work on 30 Rock, eschews the brightly lit framing of conventional rom coms. Instead, he focuses on the characters’ quirky behavior over the course of a tone-shifting ride that swerves from slapstick to romance unexpected death by haystack. Speaking to The Credits from his home in Los Angeles home, Clark extols the virtues of the large format Panavision DXL 2 X camera, describes the joy of shooting in confined spaces, and explains trickery involved in simulating a cross-country train ride from the confines of a Toronto soundstage.

You earned two Emmy nominations for shooting Tina Fey’s now-classic sitcom 30 Rock.  What was your takeaway as director of photography for that show?

One of the things I learned from working with Tina Fey and [co-showrunner] Robert Carlock is that in comedy, your photography can enhance or elevate the scene but you can never step on the joke. The thing about Tina and Alec Baldwin and those guys is that they get into a rhythm and when that happens, you’d better bring your A-game or otherwise, you’re going to miss it.

How did you apply that lesson to Run, where it’s not really about punchlines but more about emotional pay-offs?

You have to be in tune with the actors. If you try to overpower the scene with an image, you might get a lot of pretty pictures but you don’t have anything [meaningful] to look at.

Run looks and feels different than your typical brightly-lit comedy. To organize your aesthetic for the show, did you put together a look book?

So, what were some of those references?

Chungking Express and In the Mood For Love by [Hong Kong director] Wong-Kara-wai, shot by Chris Doyle. I also thought about photographers like William Eggleston and surrealist Henri Cartier-Bresson. He took very serious photos but there was always something that’s a little off in his pictures. That’s what we tried to hit really hard in Run was the oddness of what’s going on with these two characters. As the story gets a little more absurd, you want to be grounded in naturalism so the viewer can accept the absurdity a little more.  In terms of tone, one of our references was [Cary Grant screwball comedies] His Girl Friday. In Run, the banter between Ruby and Billy is like bam bam bam bam. But we don’t cut every time a character speaks. We might hang on Merritt forever while Domhnall’s talking and running around. The scenes needed to feel experiential, which is why we sometimes follow the characters with handheld. We need to feel like we’re there with her, or there with him.

In Run, “Billy” makes a reference to Hitchcock’s Strangers on a Train, which speaks to the fact that much of the show takes place inside a train traveling from New York to L.A. How did you manage that?

We thought long and hard about how to handle the train shots. For the pilot, we built one train car that was mounted on a gimbal. For the series we had two to give us more room to flow through. And then we had trains you could see from the outside but not the inside. It was like a big puzzle.

It looks like Ruby and Billy are traveling through all these different parts of America, but you actually filmed all the train on a Toronto soundstage?

Our second unit shot the AMTRAK run from Vermont to New York, from New York to Denver, south through New Mexico up to L.A. then to San Francisco and back to Denver through the mountains. We took all that footage and ran those images through 82-inch 4 K monitors that were placed outside each window of the train car.

What kind of camera did you shoot with?

We chose a Panavision DXL 2, a large format camera that can shoot at 8K and large format lenses. This expands the image that goes onto the sensor, which gives you more detail smooths out the edges of the faces a little bit and allows you to soften the image with filters and make it more interesting.  That format also creates a shallower depth of field. So in a small space, I can use a long lens and get more image, but have the depth of field of a close-up or portrait lenses where the background drops off and gets blurry and beautiful.

The confined spaces in Run seems to crank up the tension, like when Ruby and Billy spend their first night together in the train’s cramped sleeping quarters. How did you film that sequence?

When they’re making out in the bunk beds, that’s just me and the two actors in the compartment because there was no room left for anyone else to stand. We had a little hole in the ceiling for the microphone from the boom operator, and that was it. We wanted to get the romance of train travel and their youth and all this stuff but Ruby and Billy are also dealing with these real-life issues. They can’t get away from each other and to me, that’s very dramatic.