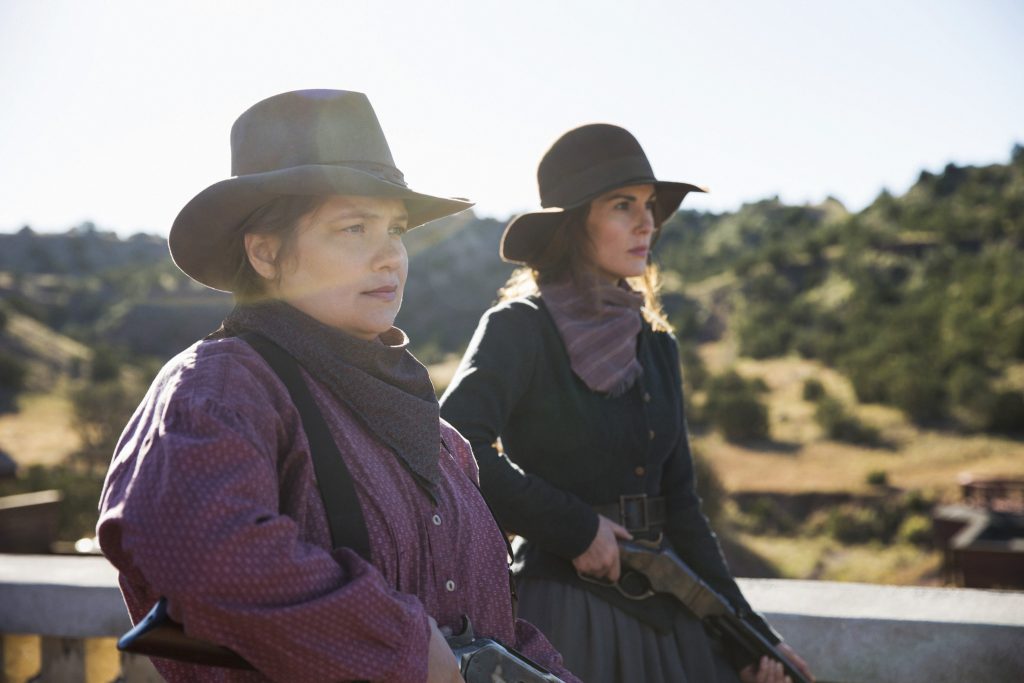 Good Skin and the ‘Western Squint’ Give Godless a Natural Look

Since the dawn of cinema, and on radio before it, lawless battles of good and evil on a new frontier have captured audiences. Then, Godless offered something entirely new in the grief-stricken community of La Belle, New Mexico. A town with a nearly all-female population, following a town tragedy, becomes caught in the crossfire of rival outlaws and they prove to be even stronger than their male aggressors. Godless makeup designer Tarra Day has worked on all manner of Westerns including Appaloosa, Hell or High Water and The Magnificent Seven, but each project has been unique.

“The script really shapes it into something new because the Western is just the genre,” Day explained. “It takes research. You want to be historically correct so you really try to be on your game in that area. You stay very true to the genre, but you really have to listen to the story as well.”

Although no two Westerns are alike, there are lessons Day learned on previous projects that she has carried over. On the set of Appaloosa, actor Viggo Mortensen pointed out a detail that stuck with Day.

“When we were doing Appaloosa he was like, ‘I want you to go outside and look at all the wranglers and I want you to tell them to take their hats off,’” Day recalled. “They took their hats off and they had a tan line. A distinct tan line from being outside around the horses all the time. He was like, ‘That’s what I want. That’s what my character is. I’m outside all the time.’ So I incorporated that with Scoot [McNairy]. It wasn’t as distinct as Viggo’s was in Appaloosa, but when he took his hat off you could see that there was a little bit of a lighter tone to his forehead where his hat would’ve been.”

In Godless, Day’s designs provide an instant profile of each character. Rather than glamorizing, the work she does tells us immediate information about how each character lives. Scoot McNairy plays Sheriff Bill McNue, one of the few men in town following the mining accident.

“For him I use a bronzer and then I would go in and stipple texture into his skin,” Day explained. “We use a texturized sponge and we call it ‘stippling method.’ The makeup is getting on in little bits, but you’re not smoothing someone out. Especially in the Western, you want to see the texture in the skin because they’re outside a lot. Their hands aren’t perfect, so you want to do a little stippling there and Scoot had a scar that I would accentuate with a little hand drawn lighter color.”

Day and her team do a lot of work to illustrate detailed characters, but she starts with what isn’t there. The artists strip down to the natural skin and from there build a look that isn’t overly done.

“When you’re doing a Western and you’re in the middle of Santa Fe, New Mexico, and the elements, skin care is the core and foundation of what you do for each person,” Day said. “When you’re shooting for six months, you have to make sure their skin is staying really great. You start with the skin care and that’s the best thing we can do. I always am a ‘less is more’ kind of make-up artist. Especially when you’re doing a Western, you don’t want to read makeup on screen. With Michelle [Dockery], it was really just having a light touch for her and just accentuating her features.”

From there, each detail of the design is carefully planned. Continuity books, making note of each characters’ appearance throughout the series, filled an entire U-Haul. Rather than tossing dirt on an actor’s face, Day and her team created each characters’ look by hand using a few techniques.

“We did this old trick called the ‘Western squint’ where you have them squint their eyes really hard and you stipple in some dirt around their crow’s feet and their lines in there so it looks like they have been riding and the dirt has gone by,” Day revealed. “A couple of the guys had some scars that we would hand draw every day. Or we use a product called third degree and we’d sculpt and create those scars for them and then we would do hand drawn broken capillaries.”

Godless is set in a brutal time and place featuring violent showdowns. The same care and detail goes into bloody injuries as dirt, grime, and scarring.

“Even when it looks kind of just thrown on there, we try to design it in a way that is a pattern that we will remember and then we graph it out,” Day explained. “We’ll have a picture of the person and I’ll go in and Photoshop it. Then we actually do it for the first time and take pictures and we keep that every time. With blood, unless it’s an exact cut or a bruise, it is just kind of random. You just do it for the first time and make sure it matches.”

To maintain the consistency of tooth decay, the work was done on the front end then more easily applied daily than the rest of the makeup. Dental casts were created in house to create a custom vacuum form for each actor.

“A vacuum form is like a plastic component that they put over their teeth and they can wear them all day,” Day explained. “This way the stains, like the tobacco stains and the rotted teeth, is in continuity and it never changes.”

The script called for very specific designs that were sometimes difficult to produce. A flashback sequence posed a unique challenge. An interaction between Jeff Daniels’ character, Frank Griffin, and a young Roy Goode required Day and her team to turn back the clock.

“We couldn’t do anything with Jeff as far as how were we going to make him look younger from the present time,” Day explained. “Since he has a gray beard and gray hair, we said okay we’ll just go backwards and color in his beard and smooth out his skin and make sure you can’t really see the lines in his face. Then when we get to the current time, we would get rid of all the color, and we’d let all the gray come out and I’d really accentuate his lines and I’d give him texture in his face just to make him show some passage of time.”

Day and her team were working with up to 55 principles and stunt actors in a single day. Across four makeup and hair trailers, they transformed the cast into the citizens of La Belle and the Griffin gang with stunning results.

“It was really one of the best experiences I have ever had,” Day said. “It was a delight because these women all came in and there was not any kind of posturing with any of them. I think that we just created a space where everybody could feel safe and not insecure. And so, you saw it on screen. They were just really, really awesome together. When I think back about it there was with all those women, it was really incredible.”