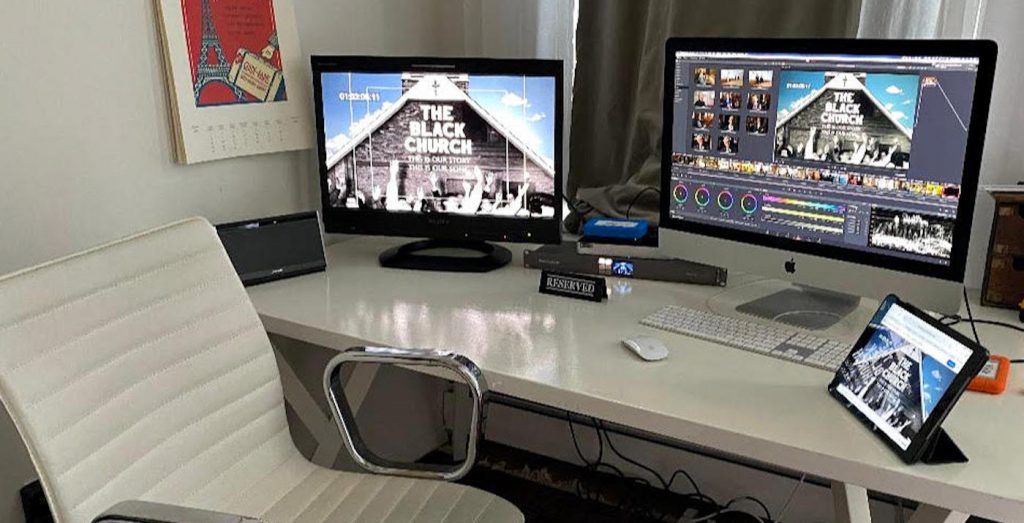 Post-Production Crews Pivot To Homework To Keep The Lights On

Anybody walking down West 45th Street in Manhattan’s Hell’s Kitchen neighborhood on a recent Tuesday might not have noticed them. In the narrow parking lot of the eight-story building marked 432, men loaded equipment cases into waiting vehicles. Two of those enclosures contained Sony BVM-X300s, top-of-the-line professional monitors that colorists use to finish tv shows and films for broadcast. Each can easily cost $30,000.

This wasn’t the scene of a brazen heist in broad daylight; it was the execution of one TV and film industry studio’s business continuity plan. By the end of the week, New York City would be under an unprecedented lockdown to slow the COVID-19 outbreak, which required most businesses to keep all of their employees at home.

Keith Shapiro, the head of the post-production finishing team at Hell’s Color Kitchen, was getting ahead of the mayor’s impending order by enacting his company’s plan to disband its 10 employees temporarily. They would reconvene virtually to continue working on the eight TV shows and documentaries they had been hired to complete.

“We had a day of planning for the change and a day of getting it done,” says Shapiro. “Then it was like, ‘OK, hopefully, see you soon.’”

Shapiro credits MPE, Hell’s Color Kitchen’s parent company, for the smooth transition. The organization typically rents editing and sound-mixing equipment to others, so it was no problem for him to get the expensive units into his team’s hands to set up makeshift editing suites at home. And MPE also invested in a remote media server that could house and feed massive digital files out to remote locations.

The biggest hitch so far, he says, has been in altering long-held daily routines. Half of the team has been laboring together for decades. “Work has been about the same, we’re just not in the same room anymore,” he says. “We’re a family, so our only issue is that the family is separated.”

To bridge the distance, Shapiro’s crew uses the remote conferencing service Zoom for daily check-ins. And because people can’t just get up and talk about something with a colleague in the next suite over, Shapiro says he’s noticed a 50 percent upsurge in emails.

Hell’s Color Kitchen is still flush with work, and Shapiro doesn’t see any diminishment coming soon. “There’s a lot going on—we already had business booked, and clients are telling us they still want to finish their projects,” he says.

That optimistic view isn’t shared across all parts of the industry.  Coronavirus is hitting many hard.  Film festivals, premieres, and awards shows like the Daytime Emmys are off. Owners have shuttered movie theaters. Studios have pushed back release dates and stopped production on 31 films so far. Even The Great British Bake Off hasn’t escaped the virus unscathed.

Many post-production shops and their employees are feeling the impact. Below-the-line filmmakers, from editors to cinematographers to costume designers, are freelancers. An unprecedented work stoppage for folks whose livelihoods depend on the next project is a very scary proposition.

But others like Hell’s Color Kitchen are weathering the storm by pivoting to remote work. The Visual Effects Society published a work-from-home best practices guide. And some editors offered similar stories of rapid switching to fulfill their commitments and keep the lights on.

Working around working from home

One New York-based supervising editor for a weekly show who wasn’t authorized to speak said his team of dozens needed to get creative when someone on staff was potentially exposed to COVID-19. They were only a fifth of the way through putting together the next episode, which was scheduled to air in a week, when they needed to abandon the office. Now, instead of being in a single Manhattan studio, they had scattered to the outer boroughs, New Jersey and even as far as Pennsylvania.

And, unlike Shapiro’s group, they had no media server that could support remote connections so all of the editors could have access to and work off of the same files.

So they quickly bought hard drives that could hold up to 16 terabytes of data and dumped copies of the same project files on all of them. Then everyone went home toting their editing systems. “Doing that saved our asses,” the editor said. “We used to call it a sneakernet because you actually walked the raw footage from place to place.”

TV and film production is creative work that doesn’t necessarily demand labor to be physically located in one place. But unlike writers or designers, who can continue producing even while being fairly mobile, there is at least one element specific to post-production that can pose challenges to remote work. The raw digital video files needed to put together a piece can be massive. One broadcast-ready, half-hour cable show can easily top 3 terabytes, for instance.

The reality is that residential internet upload and download rates can decrease dramatically when an entire city’s workforce is operating from home. And remote video editors can easily pull a terabyte of files across the internet every day.

The editor said he’d taken to staying up late into the night, keeping himself up by playing guitar, to transfer data when network traffic diminished. To finish the job, the team convened on Zoom and collaborated through Slack. Aspera provided high-speed data transfer to move files around.

But even with those limitations, he said remotely pulling together a show for broadcast on deadline was akin to a miracle. He gave praise to his team’s tenacity.

“By the Wednesday before broadcast, it seemed like a daunting task—many of us hadn’t slept much,” he says. “But we all realized the sheer challenge of it. So I said to all the editors, ‘No matter what happens, we’re going to put a show on the air, and we will always remember we succeeded at doing that.'”

Featured image: Colorist Jon Fordham’s set up at his home allows him to work remotely.