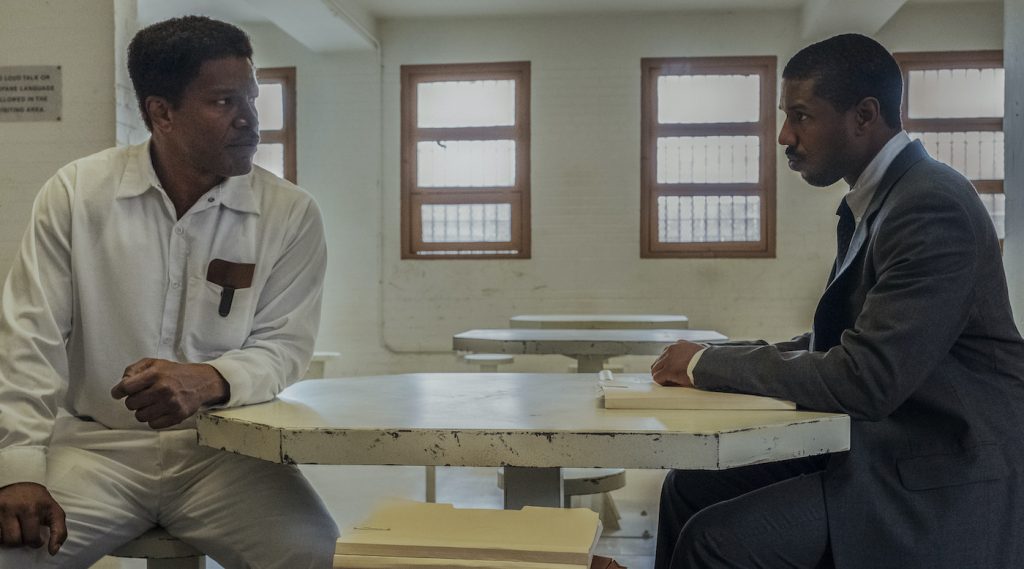 Sanders broke into feature films when he edited Florida State University classmate Barry Jenkins’ first movie. While he waited for Jenkins to get Moonlight off the ground, Sanders worked on reality TV shows like “The Biggest Loser” and “Fashion House.” Eager to get back into features, he trawled Sundance Film Festival short film entries in 2009 and discovered Cretton’s 22-minute version of Short Term 12. “It blew me away,” Sanders recalls. “I noticed that Destin had edited it himself so I saw an opening. I sought him out and made it very clear that I’d love to work on the full-length Short Term 12. That began our collaboration.”

Just Mercy, also co-starring Brie Larson and Tim Blake Nelson, unspools as a stirring blend of procedural sleuthing, courtroom theatrics and jailhouse drama. Speaking from his home in Los Angeles, Sanders drills into the movie’s riveting electric chair sequence and breaks down some of the cuts that make Just Mercy pop.

Just Mercy deals with matters of life and death faced by real people. Did you feel pressure to get it right?

I woke up so many times in the middle of the night with ideas, wondering  “Are we getting this [story] point across?” Destin and I had our heads fully in this world for ten months and felt a real responsibility to Bryan Stevens and his message.

Just Mercy is very much an actor’s film, with minimal special effects or action sequences. How did you assess performances?

Part of the editor’s role is to be a kind of detective, figuring out the director’s intentions. So you look at take one, which is usually what the actor prepared the night before. Then you see where the director steered them to by take five. “Oh, he’s looking for something more subtle.” Or, “He wants to highlight this beat.” It’s a combination of being objective and also serving the director’s vision.

You also make sure the dialogue includes key facts?

Destin usually lets his actors put dialogue in their own words to make it more their own, but because this one was a legal drama, we needed very specific pieces of information. The first day of shooting, some takes were a little looser and we lost pieces of information, like a line saying there weren’t any black jurors allowed on that first trial of William McMillian. So I’d relate that to Destin. I had to become an expert on the case, doing deep dives on Wikipedia and things like that.

Just Mercy re-enacts the execution of Herbert Richardson, played by Rob Morgan. It’s a tough sequence to watch. You cut between Herbert and shots of his friends on Death Row rattling their cups, underscored by the gospel song “Old Rugged Cross.” How did you assemble these different elements?

I put that scene off until the very last minute for my first pass because the emotional weight was so intense. You feel what’s happening when we bring Herbert into the room to get strapped in [to the electric chair], but it took too long to get to his final words. We took out stuff that slowed it down — guards opening the door, pulling the switch. But when Herbert hears his friends banging the tin cups, that’s clearly the emotional apex, so we close in on his face. Then we ease down the yelling and banging, ease down on the music and just go silent for one last moment of peace for Herbert before the chair [kills him]. In the execution scene, as opposed to other areas of the film where the style is more naturalistic and understated, we wanted to go for maximum impact.

In the big courtroom scene, Jordan as Bryan Stevenson challenges witness Ralph, played by Tim Blake Nelson, so he can prove the innocence of Foxx’s character Walter “Johnny D” McMillian. Was it tricky to juggle between all these key players?

I’ve never done a movie before where we had to keep so many people active throughout a scene. Tim Blake Nelson is on the [witness] stand so you have to keep him very active. Then you’ve got Walter watching Ralph, the man who put him behind bars. You’ve got Walter’s family sitting behind him. Brie Larsen is there as well, and the D.A. and the sheriff and Bryan, who’s working on Ralph to get him to a place where he’ll be honest. We had to check in with each character at regular intervals: “Okay how long has it been since we’ve seen this person?” That was a new challenge for me.

Editing is somewhat mysterious. Without being in the room and seeing the footage, it’s hard to know exactly what the editor contributed and what the director contributed. But to me, editors are basically like co-writers working with the directors on the last draft of the film. You’re dealing with the concrete reality of what you see on your computer monitor as opposed to using your imagination on the blank page. Sound, visual effects, music, all that stuff goes through the editor. We use every tool possible to make sure the story gets told in the best way possible.