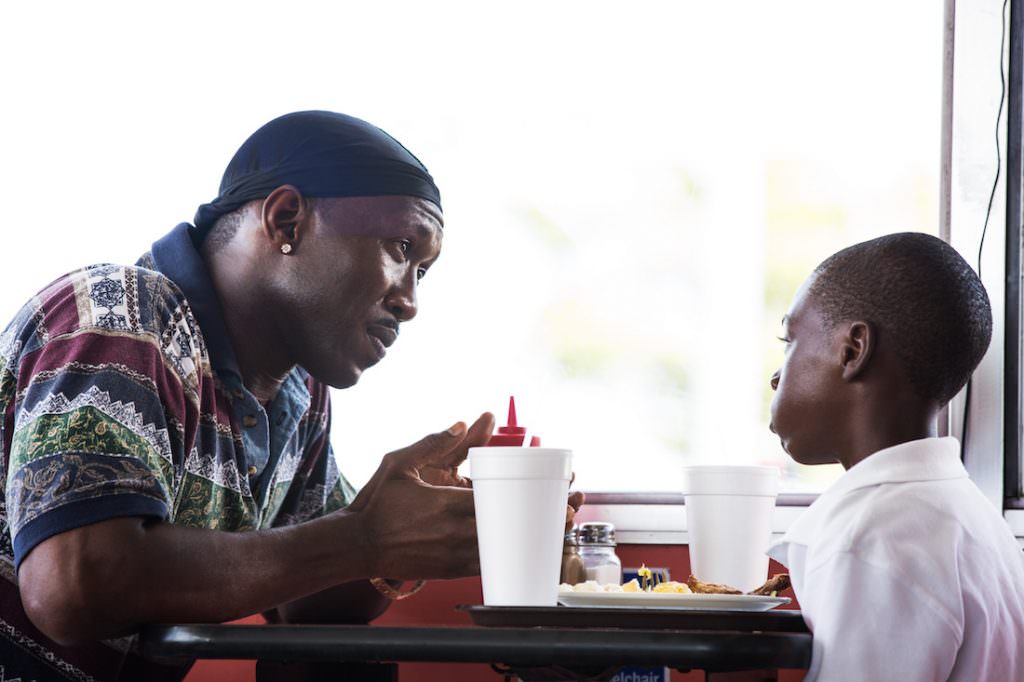 Nominated for six Golden Globes, the stunningly beautiful, brilliantly executed Moonlight was one of the best films of the year. We've spoken to composer Nicholas Brittell, breakout star Janelle Monáe and cinematographer James Laxton about how they helped bring director Barry Jenkins film to life. The story, tracking three periods of time in one young man's life—as a child, a teenager and a grown man—was based on the play by Tarell Alvin McCraney called "In Moonlight Black Boys Look Blue." Both McCraney and Jenkins grew up in the Liberty Square public housing projects, in Miami, where the film is set. The central character of the film, Chiron, is shepherded and neglected in equal measure, as he struggles to come to terms with his sexuality, and himself, in an era where young black men like him were in an impossible position.

One of the many miracles of the film is the brilliant pacing—there's not an ounce of fat on the film. Every scene and every sequence feels vital. The acting is revelatory, not just Monáe, but the three actors who play Chiron—Alex Hibbert when he’s a boy, Ashton Sanders when he’s a teenager, and Trevante Rhodes as a man. Then there’s Naomie Harris, as Chiron’s drug addicted mother, and Andre Holland as Kevin, a man Chiron knew as a boy and had a traumatic relationship. Finally, there's the incandescent Mahershala Ali as the charismatic Cuban drug dealer who takes him under his wing at the film’s outset. All of these actors give career performances. Helping give shape to their performances were editors, Joi McMillon and Nat Sanders, doing the invisible work that binds all great films.

"The first day of dailies we received was the scene with Little (Alex Hibbert) playing ball, and it was our first glimpse of what Barry [Jenkins] and James [Laxton] were doing down in Miami," McMillon says. She and Sanders were working on the film back in Los Angeles. "It was just beautiful footage, and they were entrusting us to make this movie as beautifully cut as it was shot. It was a bit nerve wracking."

Both McMillon and Sanders had worked with Jenkins before, but this was the first time they were teaming up on a feature together. And not just any feature, but one that was as personal as possible, about a world he knew intimately and wanted to share honestly.

"Barry’s a very precise filmmaker, he has a vision of what he wants that's executed in all aspects of the filmmaking—in the ciematogrpahy, the sound, the editing," McMillon says. "So when we first got to work, we knew his sensibility and had some idea of how the movie should feel, but it was definitely a process of finding the right rhythm and pacing from each act to the next."

Those acts sometimes spanned many years, and they began with Chiron as a little boy, long before he's found his voice. Called 'Little' by his neglectful mother and his peers, he's a fearful and watchful child, and, until he meets Juan (Ali), very much alone.

"The part we came back to a lot was the first seven to ten minutes of the film, because your main character, the preson who’s going to take you from each act, doesn’t really say anything, so what we're trying to do is get the audience onboard with this character with looks and glances, showing you what he’s experiencing. Also, we had to find a balance, because Mahershala Ali is such a presence, but the movie’s not about him, so it’s about finding a balance so it’s still from Chiron’s point view of."

McMillon says that while the strength of the performances makes her job that much easier, it also meant there were great moments that they had to leave out of the finished film.

"There’s one scene that’s not in the movie, it had this character Tip, he was a local from Miami and Barry cast him in this role, he was one of the corner boys who worked for Black [Trevante Rhodes as the grown up Chiron] in Atlanta. It was such a great scene and had heart, but when the movie is working you have to adhere to the film, so that scene didn’t work anymore."

The film's not just a feast for the eyes, but the ears. McMillon says that part of the work she and Sanders did was making sure you were plunged into the world by what you heard, and didn't hear.

"When he’s getting beat up in high school, the sound falls out and it’s just score," McMillon says. "The way Nat and I work, we feel sound is just as important as picture editing, and a lot of time you can’t find out if a cut is working when the sound’s not matched. So went spent a lot of time on things like how long the audience would hear Chiron being beaten up until it’s just score. Or the ambient tone between acts one, two and three. For a while we had a lot of rustling wind, then eventually Nick [Brittell, the composer] came on and created little pieces for us to put in between them to bridge those acts. After we screened in Toronto, we went back and worked on the mix a little bit more. In some areas, when you’re first introduced to Miami, it was a little too sparse, and we wanted the audience to hear the difference between Juan and Teresa’s neighborhood [in a leafy suburb], from where Paula and Little lived in the projects. They needed to sound drastically different."

Without giving anything away, the final ten minutes of Moonlight are some of the most moving in recent film history. One scene in particular, at a diner, is an aching tribute to the horrors of alienation and the redemption of acceptance. For McMillon, what looks effortless on screen required a ton of it in the editing suite.

"The toughest part of editing the diner scene was that you are in the diner for a while, so you have to approach it in a way where you want them to stay in the diner and don’t want to leave. Andre Holland, who plays the adult Kevin, and Trevante Rhodes, as Black [Chiron, grown up] just came to play in that scene. Even when one of them wasn’t on camera, they still gave these incredible performances off camera, which makes it easier to cut between the two performances. I could have spent more time with them, I had remind to myself I am the editor on this, I’m not supposed to be hanging out watching the dailies."

The diner scene stands as a perfect example of the leanness of this film; it flows swiftly from the casual to the momentous, without a single excessive beat. Or, as McMillon puts it, the scene has no "duplicate information."

"One of the things we paid attention to was if there was something we found out before or afer the diner, we took it out. We wanted it to feel like an organic conversation between two people trying to rekindle a relationship. I paid attention to the highs and lows happening in the scene, then when Black reveals what he’s doing for his work, the bubble kind of bursts. Up until then, it's going so well, the food’s good, everthing’s on a high, but then when Kevin plays that song for him, it brings them back to where they were…we wanted to pay attention to those moments."

For McMillon, Moonlight is a career highlight, a film she got to share with her family and watch how they reacted to the work she, Sanders and the rest of the cast and crew poured into the film.

"I watched it in Toronto with my sisters, it was the first time I sat with my family and they're seeing something that’s going to have my name on it as an editor. I was anxious and nervous. Then I watched my sisters to see how they were taking it. At the end it was so great to see how proud they were of me, and Toronto’s audience was so great. There was also a very touching Q&A afterwards where Mahershala spoke about how, as black actors, Moonlight gave them a moment to actually process their feelings on camera…how black actors often portray a custodian or a security guard or a homeboy, but in this movie, they we were so much than that. People can see this world and, even though they may never have gotten close to it, they can identify with these characters."