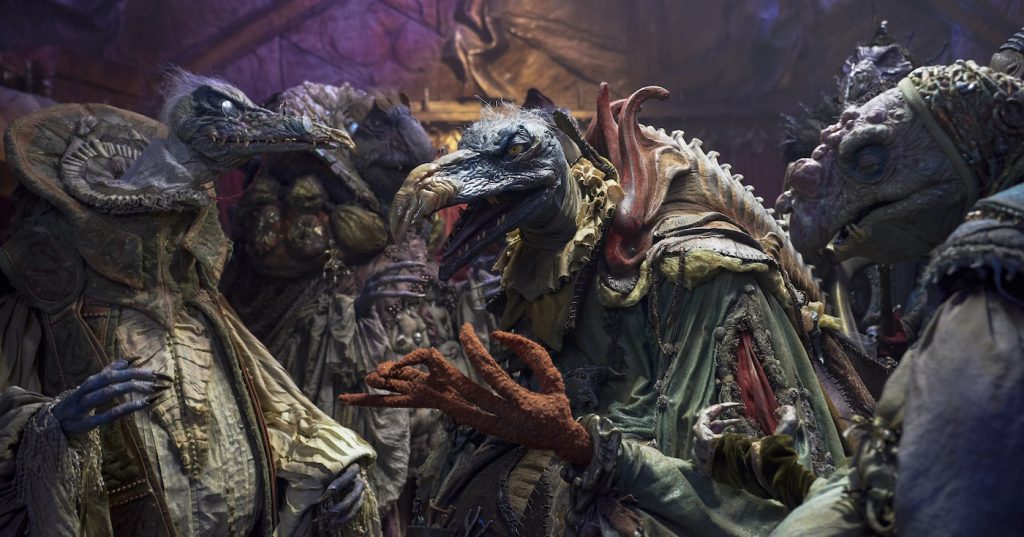 When director and executive producer Louis Leterrier got to work on The Dark Crystal: Age of Resistance, he knew he needed serious artists to help pull off his ambitious vision for this return trip to the mythical Thra. Leterrier’s update builds on the world first created by Jim Henson and Frank Oz’s classic 1982 film The Dark Crystal. Henson, a wizard of the practical effect and the brains behind The Muppets, Fraggle Rock, and Labyrinth, is a tough act to follow. Yet thanks to folks like production designer Gavin Bocquet, Letterier was able to pull it off and then some.

Age of Resistance is actually a prequel to Henson and Oz’s original film, following three Gelfings—Rian (Taron Egerton), Deet (Nathalie Emmanuel), and Brea (Anya Taylor-Joy)—as they try to make their way through Thra, a mystical, magic kingdom controlled by the evil Skeksis. Our young heroes aim to spark a revolution against the villainous creatures controlling Thra—their epic quest through this fantasy world required a dizzying amount of world-building that involved creating an obsessive amount of detail.

“I had met Louis socially a few times before. Then we had a Skype particularly about this show,” Bocquet says. “We knew what a groundbreaking film The Dark Crystal was a the time. Our initial challenge was to honor the work that had been done by Jim Henson and Harry Lang, the original designer. We knew there was a huge fan base, even following the film to books and comics. So we had to make those fans believe them we could reproduce that world. We needed to honor what went before, and then we needed to push it further.”

Push it further they did. Using old-school, but highly refined and technologically updated puppetry and mixing it, subtly, with CGI created one of Netflix’s most fully realized, expansive series ever.

“The worse thing is you have a blank piece of paper to start,” Bocquet says. Yet thanks to a quarter-century worth of experience, he was able to deploy everything he’s learned to help create an utterly bespoke, largely practical new world. “It’s intuitive to a certain point, after 25-years of being a designer, there does come a point in your career where you feel quite confident about the experience you have. Not in an arrogant way, but where you can reply all this knowledge. Dark Crystal gave me the opportunity to put an awful lot of things we’ve learned into this show. In the first film, 75% of it took place in the castle. For our film,  about 80% was outside that castle environment.”

Thanks to advances in literally every facet of the filmmaking process, Bocquet and his team had good cause to be ambitious.

“We had to decide how expansive do we want to be in showing the rest of Thra,” he says. “You needed to be in line with the original film, which couldn’t be that expansive because of the techniques they had at the time. The line between visual effects and practical sets was always something we discussed. We had a really good relationship with the VFX team, and we knew what was necessary to build, and where we could use the VFX world. We wanted to use computer graphics only minimally, we hoped, to retain that tactile world Henson and his team built in the original film.”

Building a mythical world is hard enough; doing so in miniature is harder still. Yet Bocquet points out that smaller scale doesn’t mean less detail.

“The challenging sets to build are, of course, the interesting ones,” Bocquet says. “It’s never necessarily about size or scale, you can have a small interior, like the Groton underground house, but with our camera in there, you can be looking at the texture on the wall in great detail, even though it might only be a 12-inch section of wall, so it’s not about scale.”

For the vast forest, Bocquet and his team figured out a way to build nearly two dozen versions of it so that it looked both colossal and, when the characters move through different sections at different times, appear distinct in scene after scene.

“We built sections of the forest so we could move these trees and bushes and rocks around, to give Louis a different way of shooting that environment,” he says. “I think that forest probably had 20 incarnations—dark forest, morning forest, enchanted forest, etcetera. You really believe you’re in an endless forest. We did have a painted backing for shots that were slightly out of focus, but for an animated camera move, we’d drop a blue screen in front of the scenic backing to use CG to make the forest look bigger.”

“The Vaprans, the most sophisticated clan of Gelfling, and their architecture needed to be quite sculpted and elegant,” he says. “By nature, it’s a one-off and quite expensive, so we had to think of clever ways so the audience would think that the Citadel throne room and the library were more complicated architecturally then they were in the actual set. You’re trying to give the illusion that there’s not a straight line in those environments, even though there is. We had to be very clever in how we physically built these interiors to make those work.”

Sets speak to character. The way someone appoints their living space tells you a ton about them. This is true for Gelflings as it is for human beings.

“You only see the interior of the Groton house for a glimpse, but those interior sets, those domestic living spaces, tell you more about the characters than a big grand palace,” Bocquet says. “This is how we explore characters; where they live and what their personal life looks like.”

Bocquet was in awe of the work the puppeteers did, as well as the way their movements and the work of the voice actors cohered.

The ingenuity required to pull off this fantasy world included some serious engineering.

“The Skeskis are about 6-feet tall, the Gelflings are 3-feet tall, so we had to create these rostrum platforms that could be moved so we could have all three characters in one scene,” he says. “The whole intention was to give Louis as much flexibility to do what he needed to do, so we created the rostrums and had a standby rostrum team, so they could handle that. The job we do is as much a physical, financial challenge as it is a creative one. The amount of detail involved here meant that everything had to be created, nothing could really be hired out or bought because the scales were so specific. So everything had to be designed and made. So all of those props, every cup, every doorknob, had to be designed, I’m just amazed. The detail that’s in that work, it’s never-ending.”

The Dark Crystal: Age of Resistance is streaming now on Netflix.