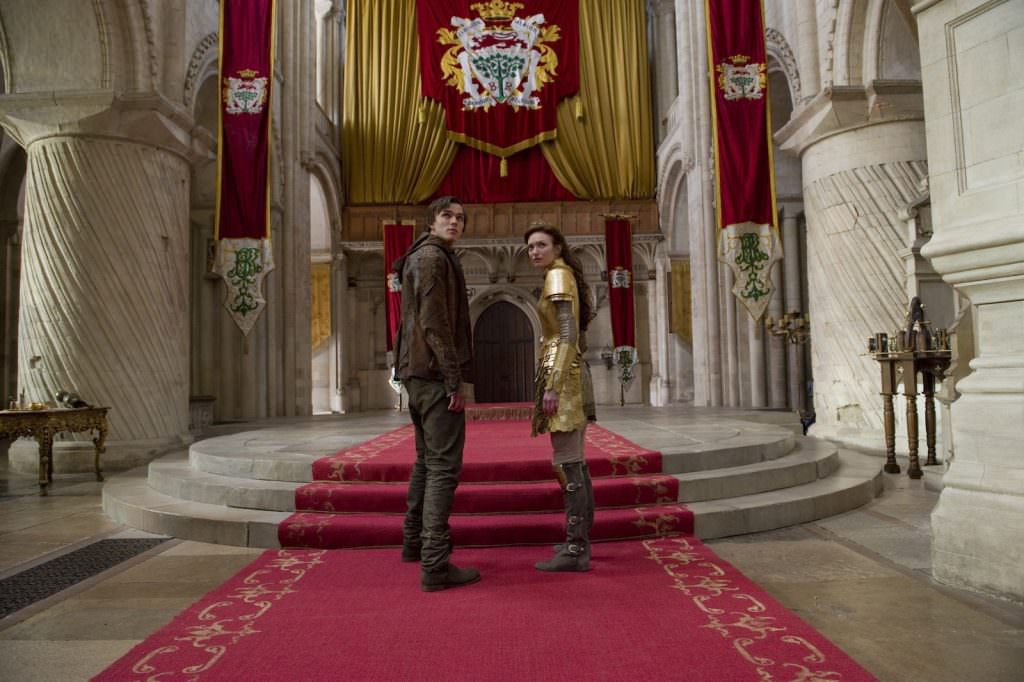 From Return of the Jedi to Jack the Giant Slayer, the Worlds of Production Designer Gavin Bocquet

Starting out as a draftsman on Return of the Jedi (1983), Gavin Bocquet’s career as a production designer coincided with the development and implementation of CGI technology into all spheres of the movie business. Bocquet was at the forefront of that revolution, working regularly for George Lucas, honing his craft on the TV show The Young Indiana Jones Adventures and the trilogy of Star Wars prequels. His career reflects the developing integration between practical production design and ever evolving CGI technology. We spoke to Gavin about his most recent production design work on director Bryan Singer’s Jack The Giant Slayer.

The Credits:  What were some of the unique challenges you faced in terms of the visual conception of Jack The Giant Slayer?

Bocquet: When we started with Bryan [Singer], one of the first things we were looking at was the land of the giants, Gantua. How do we establish the history and the reality of that world within the story? It was combined with the script, in terms of origins of the giants, how they evolved into this magic land, and one of our first challenges, along with the development of the giants and the world they lived in, was to create the world of the Cloister of Albion where the human story took place. They really had to complement each other and you really couldn’t do one without the other, although the Albion and Cloister worlds were based to a certain extent on historical England, but in a fantastical fairytale way.

What kind of prep time did you have on a movie of this scale?

Jack was a little unusual. Normally if I had to take an average of a film set in a fantasy world with a $100 million plus budget, we would probably expect to get nine or ten months prep. Two or three of those months could be a sort of pre-prep, which often happens before the picture’s actually got the green light. It’s sort of a development stage to prove to the studio, visually, script-wise and budget-wise, that we can pull it off. Talking about real prep, the average is about five or six months. I would often come on a couple of months before that, as other designers would, because in this day and age it is more common to get pre-visuals done before the studio or whoever is financing the film will agree to go forward. Going back to the times we worked on the Star Wars films, George [Lucas] was always keen that he would rather have a longer prep with less people rather than a short prep with a lot of people. It can be more creative and economic in a sense if you have a smaller group working quite precisely over a longer period of time.

Can you tell us a little about what you were actually doing during the prep?

It’s a mixture of location scouting, modeling, and what we normally do in the design process. We had three or four concept artists and I was travelling back and forth between the United States and the UK, and Bryan would come sometimes. We had concept model makers and a location manager. The way I work, wherever possible you are always trying to find a location to base yourselves in that world. It’s a little bit harder in the more fantastical environments like Gantua. If you can’t find what you need you have to build or digitally extend. It was a collage of work trying to balance between pure concept work based on an actual location, but right from the beginning we had strong ideas of going to Iceland for a lot of the landscape of the Guantua world, so our location manager, Nick Fulton, did some scouting in Iceland and we based some of our concept art of Gantua on those environments, which are pretty extraordinary.

Bryan was interesting in that he would leave us alone for four or five weeks and we would send him a block of work. He didn’t necessarily want to see the development of each image, or see a sketch before he saw a finished piece of artwork. He would rather we produced two or three ideas of each piece to quite a sophisticated level, and he would be quite instant in his reaction on what he liked or didn’t like. Working with George [Lucas] was very much like that. You did something and he liked it or he didn’t, and we moved on in that direction or a different direction.

Did you do any research into the background of Medieval England?  Were there any paintings or illustrations that particularly inspired you or that you wanted to incorporate into the look of the film?

No, not really.  Generally your first pass of research is going through whatever fairy tales, whatever historical world you can find for “Jack the Giant Killer” (the name of the fairy tale, which was slightly tweaked for this film) or “Jack and the Beanstalk” to see where you want to fit it into. But Bryan was quite keen that he wanted to create something that was quite gritty but still fantastical. He wanted the Albion and Cloister world to be a real world of England or Britain as it was in the time. More of that may have come in the world of Gantua, where we were in a slightly more unreal world, although that, too, had to have its air of reality, however extraordinary it became. So we were looking at more historical references, although the historical references for that time are some sort of image, rather than photographs, so they always had some sort of creative bent to them by virtue of being an illustrated image. But there was nothing specific; there wasn’t one particular piece of artwork that we found and said, “that’s where we want to go.” It was more of a gradual, organic process.

The production notes say that there was a 4:1 size ratio between the giants and the humans. What was the process to determine the way the giants and humans would relate?

Yes, that was quite interesting from a design point of view on the sets as well. It comes down to practicality sometimes. Even though we were on stages in the UK that were quite high, at 45 feet, if at some point we wanted to get a camera to that height to be from the giants’ POV, we were quite keen that the giants were at a ratio that was sort of believable and not too big. In LA in the first few weeks we did some huge printouts of some of the early giants at full size, at 30 feet, 35 feet, 40 feet high, and hung them on the stage wall, so the supervising cameraman could get an idea of what could be done photographically with those sizes. There was always a thought that a 30-35 foot giant was about right. I did Gulliver’s Travels (2010) a couple of years before, and we had the same issue there determining how big the Lilliputians should be as compared to Jack Black as the giant. Those came down to about four-inches to a six-foot human. But in the historical Lilliput stories, they were much smaller than Jack the Giant Slayer is in his world. A 30-foot giant gave us a huge opportunity on the stage to get the camera to the Giant’s point of view. You can’t say that physical restrictions like that is the reason you go there, but it is one of the factors that help you decide on that sort of size.

Yes, but I also think that if we were around during the Gone With The Wind time, you know the production designers job was more or less the same, you still had to create what you wanted to be the image, and then you broke it down into how you produced it. So the process is the same for the production designer, but the tools and the palette are a lot more variable in terms of what you can do, and also at times much more expensive. It’s a very interesting time right now.

One of the goals of our site is to interview the lesser-known filmmakers who help make the content we love, and, to help protect the content of creators like yourself. As a filmmaker, could you speak a little about protecting content?

It’s immensely important. In the end it’s a cycle of investment and distribution of product and if that gets broken, investment in new creative content will be much less.