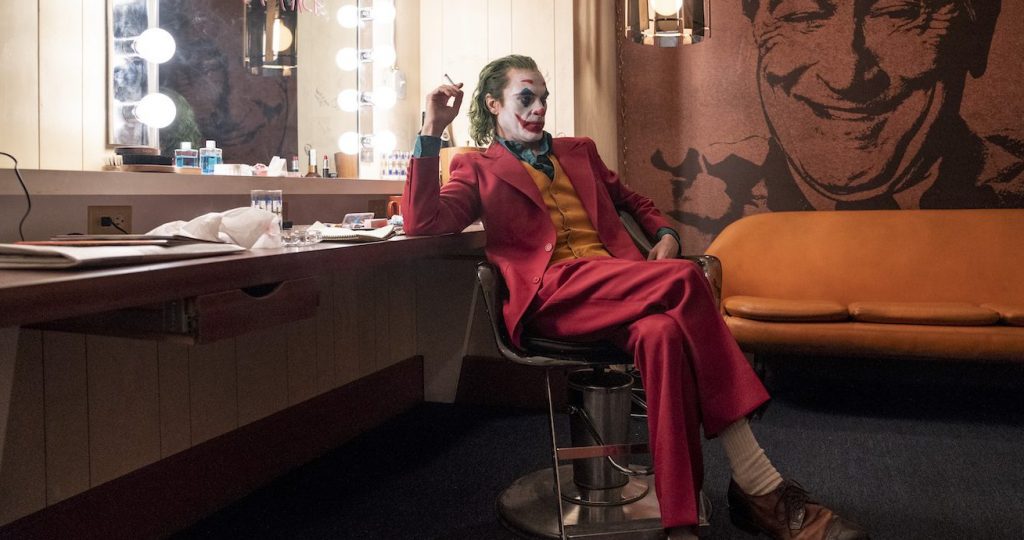 Joker last month became the highest-grossing R-rated motion picture in history, which means Joaquin Phoenix’s candy-colored three-piece suit created by costume designer Mark Bridges has imprinted itself on millions of eyeballs worldwide. Elegant, vivid and draped just so across the anti-hero’s frail frame, Joker’s outfit merits a permanent place in the movie villain hall of fame. A two-time Oscar winner for The Artist and Phantom Thread, Bridges teamed on Joker with director Todd Phillips after becoming the go-to costume designer for high-end auteurs like Paul Thomas Anderson, Noah Baumbach, and David O. Russell. During a break from his latest project in Santa Fe, New Mexico, where he’s been outfitting Tom Hanks for Paul Greengrass western News of the World, Bridges talked to The Credits about how he drew on Charlie Chaplin, white socks and Yves Saint Laurent to transform wannabe comedian Arthur Fleck into the year’s best-dressed psychopath.

You’re a master of period piece wardrobes, having designed costumes for films set in the thirties (The Artist), the fifties (Phantom Thread), the sixties (The Master) and the seventies (Inherent Vice and Boogie Nights). With Joker taking place in the early eighties, how did that era impact your approach to the costumes?

I love doing transitional periods. When I did Inherent Vice, which was set in 1970, some of the characters were still dressing from the sixties and some felt more seventies. Same thing with Joker. Arthur Fleck would of course not be up to the minute, so he has vestiges of the seventies in his clothes: A bigger collar. A flare in his trousers. Polyester or synthetic fabrics of the seventies. If you look at films or television from that 1980 period, it still had one foot deep in the seventies so it was great fun to show that.

At the start of the film, why did you give Arthur Fleck this relatively drab wardrobe?

That small hooded jacket that Arthur wears at the beginning felt right because it speaks to the idea that he’s this sort of unformed adult still living with his mom. I gave the jacket a gold-tone and worked on the color palette with production designer Mark Friedberg to sell this feeling of a kind of dirty seventies color. And then we added weird little touches, like having Arthur and his mother wear the same socks. At one point, Arthur’s wearing his mother’s pajama bottoms. It’s just kind of freaky and off, showing their life together in that claustrophobic apartment.

How did your wardrobe choices reflect Arthur Fleck’s disintegration?

The last time he sees his social worker, Arthur’s wearing a charcoal grey, emulating the guy he saw at the comic store. When he goes to Arkham [hospital] Arthur’s wearing darker clothes. By tweaking the color, we’re dropping little hints of where things are going.

Along the way, you’re setting the table for Joker’s signature three-piece suit?

We didn’t want the clothes to just be magically run off by the local tenement tailor, so hopefully you’ll notice that his Joker vest is the same waistcoat he wears at the beginning when he’s working for the clown agency. The wine-colored suit from his comedy stand-up later becomes his Joker suit, just a tiny bit quarter-turn heightened in color. We wanted you to see where these clothes come from.

The Joker suit, besides being beautifully tailored, features a fantastic combination of colors. Can you break down that look?

In the script. Todd wrote that Joker has this terra cotta suit from the seventies, but I felt that might be a little soft so we made it maroon, thinking that would be more dynamic. As Arthur’s mood and mindset changes, we tweaked that color to be a little hotter for when he becomes the Joker, but it’s exactly the same cut and style and details as the maroon suit. So he owned the maroon suit already, the gold waistcoat is taken from his clown outfit and then the green shirt was just something where I just loved those colors together.

Those two-tone vinyl and cloth-bodied spectator shoes were clown-like but also kind of smart and seventies. And then, of course, Joker wears white socks, which is completely incongruous. I never ever use white socks in a movie but I thought if there was ever a time to do it, Joker would be the one. So the shirt and the shoes just kind of appeared but the other stuff is rooted in the reality of Arthur’s life and re-combined to make that Joker outfit.

How did that final Joker suit affect Joaquin’s performance?

When we tried it on for the first time, Joaquin started to move in a different way. With its long line, the jacket was typical of Yves Saint Laurent-style elegance from around 1971. Joaquin was very happy with the way it fit and went from being this sort of man-child character into [becoming] a stronger, sexier being.

We did look at King of Comedy but I don’t think there’s really anything to compare to Jerry Lewis’ personal style. We referenced Merv Griffin, we referenced Johnny Carson of course, who had his own line of clothes, and Mike Douglas, who used to be on in the afternoons when I was growing up. Those talk show hosts were style-setters of their age, so with DeNiro, it was all about making well-tailored menswear that hearkened back to the period and the old rules of dressing.

What are the old rules of dressing?

You would always have two solids and a pattern. You could wear a patterned necktie but then your jacket and shirt had to be solid. Or if your jacket is plaid, you have to wear a solid shirt and necktie. These were men’s rules for dressing well from the seventies and eighties

After Joaquin started working with the choreographer Michael Arnold, he wound up doing some Chaplin-esque movements so we very much wanted to include Chaplin hallmarks in our choices [for his clown outfit]. The scale of the pants, the scale of the shoes, the tightness of the top torso, the shortness of the jacket, and of course the waistcoat, which Chaplin always wore. All of that came out of the movement they developed. But the conceit of the little tiny bowler was all me. I’ve always loved the clown with the little tiny bowler hat. It’s a nod to Chaplin but it’s also one of my indulgences.

It’s interesting that you didn’t directly pull from the D.C. Comics comic book version of the Joker, yet you wound up with this character that looks tailor-made for a graphic novel.

Without us really consciously doing it, we started out with this normal gritty film and the story led us to a product that would be at home in a comic book. That rather cartoon-like color combination just organically came out of our choices along the way as we made the movie.