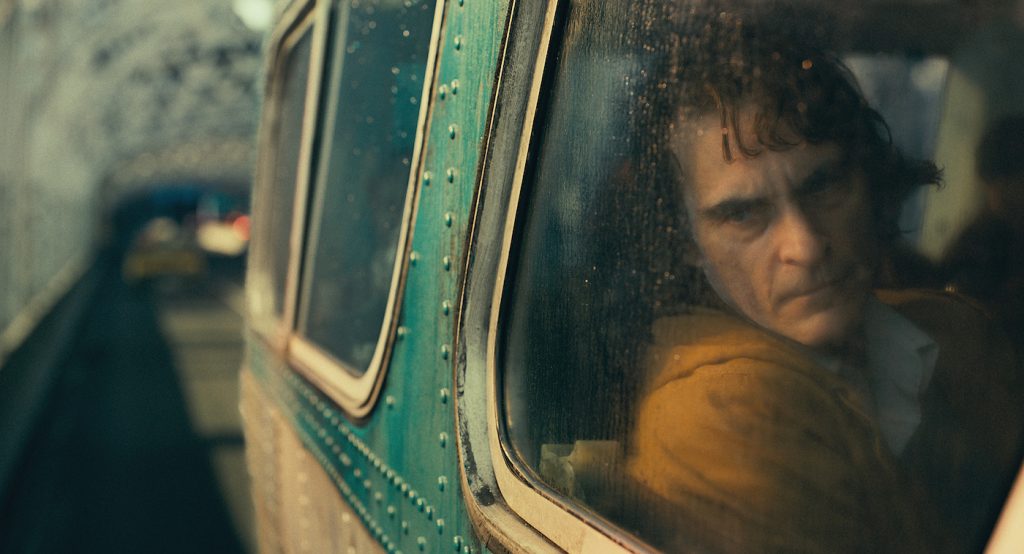 If one thing is certain about Joker, director Todd Phillips’ half-billion-dollars-and-growing grossing dark take on the origin story of Batman’s chief supervillain, it’s that the film means about as many different things to its audience as there are people who’ve seen it. Is the Joker a compelling vigilante or simply a have-not gone mad? Are Arthur Fleck and Batman actually half-brothers? Does Fleck’s never-ending downward spiral speak for incels everywhere? (Absolutely not.) What’s certain is that Arthur is a more than down on his luck middle-aged stand-up comic wannabe working a miserable day job as a clown for hire in a particularly gritty take on Gotham City, made up to look like New York in the early 1980s. None of the settings where Arthur spends most of his time could remotely be considered nice, from the bleak locker room at Hahas and his batty mother’s faded, broken-down apartment, to the graffitied public transportation where he first really loses it, emptying the contents of a gun he never even wanted into the jeering bodies of some Wall Street nasties.

This moment of subway vigilantism is reminiscent of the Bernie Goetz episode of 1984, although it swaps class dynamics for racism. Joaquin Phoenix plays Arthur against a saturated backdrop of old New York, which has been endlessly critically compared to Taxi Driver. This is not incidental. “When we sat down I pitched Taxi Driver ([Phillip’s] favorite film) in the sense that it looks like a few crew members and a camera tumble out of a van and start shooting,” Joker’s production designer, Mark Friedberg, told me. “I pitched a low-fi world. Uncompromising. I suggested that if we didn’t go for it the film would fail.”

Phillips, who grew up in pre-Giuliani New York, as did Friedberg, went for it. “We certainly looked at the iconic films set in New York City from 1969 (Midnight Cowboy) to 1980/1 when the film was set (Wolfen), and while there is a great deal of Scorsese Sauce being passed around the table of this telling,” the designer explained, “it was really the city we knew that was our guide.”

Present-day New York is safer than either itself in 1981 or Arthur Fleck’s Gotham City, but to a point of scrubbed clean impersonality. To Friedberg, Gotham City was itself “a character in the story,” and shaping New York of the 21st century into something that “manifests [Arthur] and his life experience,” able to carry its weight as Gotham, took some finagling. “We dealt with it by mapping an entire city plan and superimposing the neighborhoods in the areas that still had some grit: the South Bronx, Harlem, Newark, Chinatown. We created our own transit system and mapped that. As wild and open as the story seems, we always knew where Arthur was and where he was going,” said Friedberg. The goal may have been Taxi Driver’s just dropped-out-of-the-van shooting style, but all comparisons to that movie aside, anodyne New York today makes mimicking this pretty much impossible.

Where locations couldn’t be found, Friedberg built sets. Hahas is his favorite—“A Clown Agency? What even is that? And when Arthur loses the job he is so sad,” Friedberg mused. “‘I love this job, Hoyt.’ You love that job? Wow. I was going for Fellini by Lumet. Weird. Haunted. A plan out of time in a movie out of time. A locker room where men banter and put on makeup.” For cost and production reasons, a number of settings had to be built on stages, “but I wanted as much to be on location as possible and all to feel like it was shot that way,” Friedberg said.

After much searching, however, the apartment Arthur shares with his mother was filmed on location. Friedberg wanted the family home to like something formerly nice, “that just decayed around her and Arthur. We looked a great deal for this as well. I had us in East New York, in the projects, in other under-the-elevated-train places deep in Brooklyn. But Todd liked the stairs. And boy was he right.” (However unintentionally, Joker has launched the outdoor Bronx stairway where Phoenix dances away from the cops to dubious Instagram stardom.)

“We chose the apartment building because it was once a nice deco place that fell apart,” said Friedberg. In his dilapidated home, Arthur has few possessions and sleeps on the sofa. He doesn’t fit in anywhere in the outside world, where he faces either ignominy or attack, and the crumbling apartment where he lives with his elderly mother, Penny (Frances Conroy), and helps her bathe, is no respite. “The wallpaper scared us at first, which is how I knew that it was exactly correct,” said Friedberg. “The length of the hall also scared us and it turned out to be perfect. Basically what scared us told us which way to go.”

Friedberg’s Gotham City is so well-suited to Phoenix’s Joker that the location practically takes on the role of a chief supporting character, so it’s surprising to hear that Friedberg initially had no interest in doing another superhero movie. He had to be convinced to read the script for Joker and then changed his mind.

“In the preamble, it states that the stakes are real,” the production designer recalled. “As I read on, I saw that there is an Arthur in all of us. Luckily most of us can control those feelings of hurt and rage and find other ways to prove our existence.” For Friedberg, there was a power in the script’s ability to bring audiences to commiserate with the nascent Joker—up to a point. “We even kinda sympathize with his plight,” he pointed out. “But as he starts to form the delusion of his own power as born of violence, we part with him.” And when Arthur finally falls, the New York of so much collective memory disappears—we say goodbye to the Joker as he runs down the bright, white hallways of an anonymous asylum, impersonal and scrubbed clean.