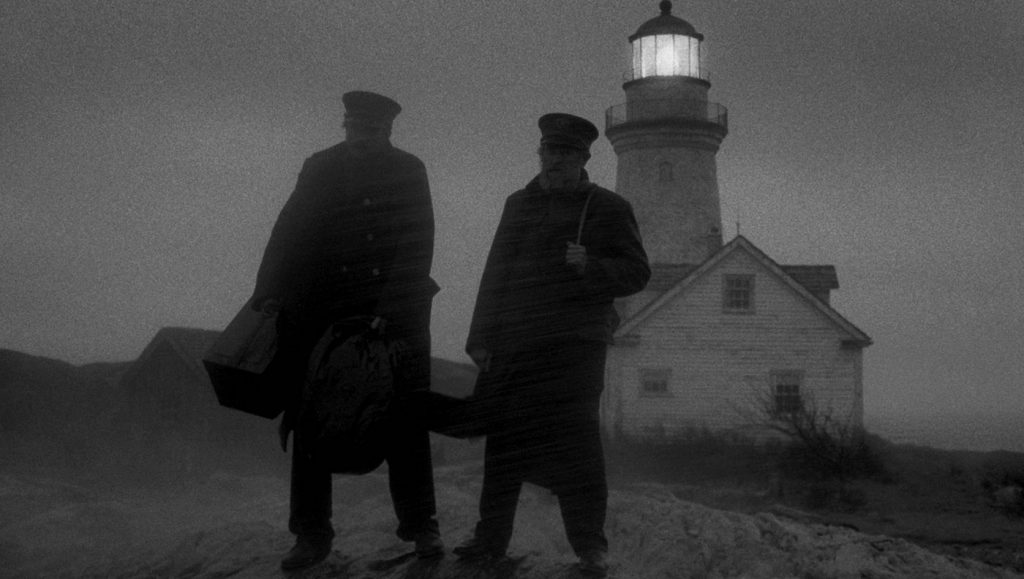 When I caught Robert Eggers The Lighthouse at the Toronto International Film Festival, I was, to put it mildly, enthused. Relentlessly original, hypnotic, and gleefully insane, it was the work of an artist and a long list of collaborators going full tilt. The performances from the two leads, Robert Pattinson and Willem Dafoe, the score from Mark Korven, the production design from Craig Lathrop—everyone listed in the credits helped turn Eggers and his brother Max’s script into the fever dream depicted on screen. (The Lighthouse is out today, October 18—do see it.)

Add to this list cinematographer Jarin Blaschke, whose camera follows our 19th-century lighthouse keepers as they both go slowly (or quickly—time is a slippery substance in this film) insane on a small island off the coast of Maine.

“All I knew before there was a script was there was going to be two people, a lighthouse, and it would be very atmospheric, of course,” Blaschke says. He is a veteran of Eggers aesthetic; he shot the writer/director’s excellent 2015 film The Witch, which did for the New England woods what The Lighthouse does for the wind-blasted, rain-soaked island our lighthouse keepers toil away on. “I was thinking of a way to make it a kind of black and white you don’t really see lately. I wanted to figure out how to make something transportive. I wanted it to feel like something dug up from the past. We had some years to slowly think about it, and have our subconscious go to work on what this thing could look like.”

What it looks like is nothing else you’ll see in a theater this year. The Lighthouse is 100% transportive—you feel like you’re marooned on that island, too—but it’s also, by turns, magical and menacing. A fable as told by Ahab.

“If something’s black and white it tends to be inherently more photographic because fewer art forms use that medium,” Blaschke says. The opening shot, of a boat moving through the fog towards the lonely, lunatic island looks almost like you’re watching a moving daguerreotype from the mid-19th century. It’s arresting, unusual, and it turns out, a sequence that Eggers had dreamed up a while ago.

“The opening shot of the boat approaching the island was one of the first things, visually, that came to Rob,” Blaschke says. “My contribution there was to suggest we not dolly past their shoulders to the lighthouse. Let’s instead keep with the continuity of the tableaux of the beginning. We were on a picture boat and just following a boat with a massive fog machine.”

“It’s pre-visualized as much as possible. I show up a little earlier than I might on another film of this size, so it’s all sort of there, and there’s time to design the entire movie, but also to sit with everything and make sure it’s right,” he says. “That said, a lot of it is instinctual when deciding where the camera should go and how it’s supposed to feel. I even try to imagine cut points, so I’m imagining the rhythm of the scene.”

While much of The Lighthouse is fueled by the brilliant back-and-forth between Pattinson’s Ephraim Winslow and Dafoe’s Thomas Wake, there are several sequences that blur the line between reality and insanity (which I won’t name, so you can experience them for yourselves). Blaschke says that for those more “out there sequences,” he had a special lens designed—called a petzval—that contains a lot of aberrations. “It creates a very squirrely look. The background almost falls out of focus, like a globe, and you get this very swirly effect.”

For the talky scenes, which Blaschke happily calls “actor bait,” he used a trick to give both Dafoe and Pattinson’s skin more texture.

“Early photography was not sensitive to red light at all, because the emulsions couldn’t see red light, so in early photographs, the skin had so much more texture, because skin reflects red light,” he explains. “So the actors, if you really look closely, they look a little more weathered then they do in real life. We had a specialty lens made, they designed a perfect filter to my specifications, and it was very light efficient. It adds a lot of texture to their skin. Modern black and white film, the type that’s been in widespread use since the 1930s, it’s panchromatic and sensitive to all wavelengths. Photography is made up of the three primaries, blue, green and red. Prior to that, it could really only see blue and green, which has a very distinct look.”

The effect is that Dafoe, whose face is already one of cinema’s greatest visual effects, looks like he’s been on that rock his entire lifetime. And Pattinson, who is called “pretty as a picture” by Dafoe’s weather-beaten lamplighter in the film, still looks like a man whose seen some tough times himself. Look at his eyes; this is a man who has seen things he wished he hadn’t.

“In a Robert Eggers’ movie, he invites people to look as bad as possible,” Blaschke says. “These guys don’t look like this in real life. Willem Dafoe has an amazing skincare regime.”

Although set on an island, The Lighthouse was filmed on a peninsula, Cape Forchu, which is the southwest extremity of Novia Scotia, so the crew could get their equipment in and out every day. The peninsula was turned into an island in post-production, and a few other shots in the film required some visual effects, but mostly this was a movie created entirely in-camera, using practical effects. For one practical effect, Blaschke found himself watching a lot of octopus videos. For shots involving seagulls, one of which becomes something of a major character in the film, there were plenty of available, non-union birds right there at the location to film. “On location, we’d been feeding them throughout the shoot to keep them around,” Blaschke says. Yet for the particular bird who becomes something of an antagonist to Ephraim Winslow, Blaschke went off to England where there’s a group of four to six seagulls that were trained back when it was legal. He shot those against a green screen in a studio.

As The Lighthouse unravels its secrets—and its protagonists’ sanity—it gains a kind of lunatic momentum towards its final, wild scenes. The intensity of the performances is matched by the simplicity of Blaschke’s framing. As a viewer, you feel almost the same sense of cabin fever as the two lighthouse keepers.

“We had a 500-watt bulb flickering right near their faces when they were talking,” Blaschke says. “Keeping to that simple lighting gave us the opportunity to use shadows and add the sense of two men in a void. Your eye goes right to the character, keeping it simple. We played things out in a single shot where I could. We were working with simple frames in chiaroscuro…unless there’s a beat change in the scene, we’re trying to pare things down to their essential component, to try and think of the purest version of a scene. If everyone else is living up to their end of the deal, we don’t have to embellish anything.”

Everyone lived up to their end of the deal. The Lighthouse is a keeper.

Featured image: L-r: Willem Dafoe and Robert Pattinson in ‘The Lighthouse.’ Courtesy A24