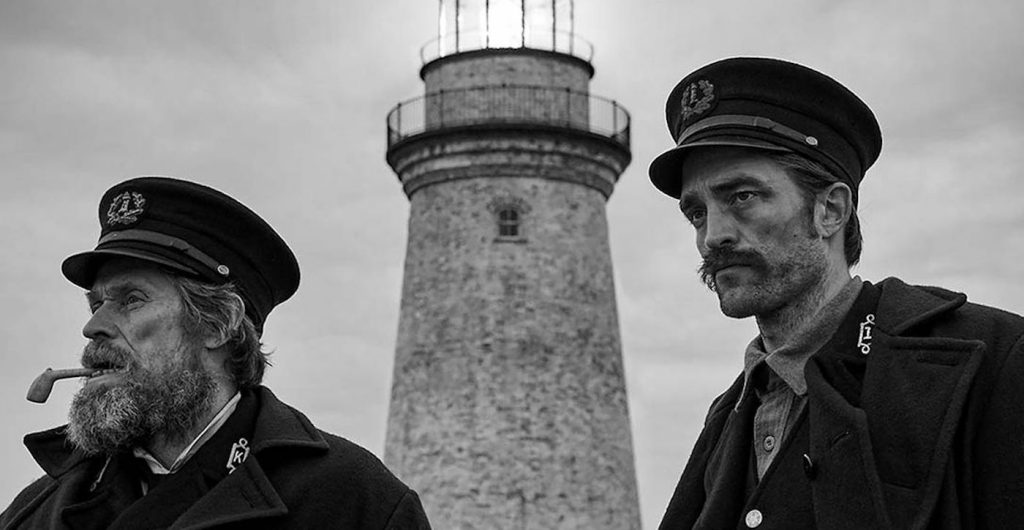 TIFF 2019: The Mad Genius of The Lighthouse

Mythic, surprisingly funny, and gleefully mad, Robert Eggers’ The Lighthouse does for the craggy, wind-blasted island what his first feature, The Witch, did for the New England woods. Man is menaced and made small by nature but is also revealed to be as monstrous and volatile as nature itself. Featuring two go-for-broke performances by Willem Dafoe and Robert Pattinson, The Lighthouse manages to convey a sense of merriment within its misery. It looks like a film that was both very hard to make and a lot of fun. The zeal with which everyone involved seemed to take to this story of a pair of lighthouse keepers who are driven mad (or were they always mad?) by their storm-lashed isolation is alive in every frame. Everyone seems to have gone mad for this film— just listen to composer Mark Korven’s nerve obliterating score. The sea rages, the men rave, and Korven’s atonal soundscape manages to capture the lunacy perfectly. Is that a foghorn, or the sound of a man going insane? Likely both!

The story is simple enough. Dafoe and Pattinson play a pair of 19th-century lighthouse keepers plying their damp trade on a small island off the coast of Maine. Dafoe is Thomas Wake, a veteran of the lamp (as he’d put it) and former sea captain (as he claims). Pattison is Ephraim Winslow (as he claims), a former logger trying his hand at another, dreadfully difficult job to earn up enough scratch to buy his own place. Winslow is doing a four-week stint working at the lighthouse with Wake. Wake makes it clear from the jump that he’s the only one who gets to tend to the lamp throughout the night; Winslow’s jobs, which are menial, many, and more or less all unpleasant, are to be done during the day while Wake sleeps.

Funny things to start to happen on the rock. As the days and nights wash by, time becomes as slippery as the sea-blasted spit of land they’re on. Names, too, prove unreliable. A pesky gull torments Winslow, as does Wake’s taste for Ahabian monologues and strong drink.

The script, from the director and his brother Max Eggers, joyously embraces Melvilleian grandeur. And why should it not, this is a tale a set in the same century and is also concerned with the sea and its humanity devouring vastness. The dialogue reaches a kind of poetic insanity when it’s pouring from the beard of the drunken Wake. Dafoe, as ever, is a marvel, his face one of cinema’s greatest special effects. Yet Pattison is no slouch, no second fiddle, and his initially taciturn Winslow begins to open up—or perhaps more accurately, spill out—once the queer and strange happenings on the island start to unbuckle him. He’s as game as Dafoe is. The two make a fine pair of lunatics.

The Lighthouse turns into something of a debauch for its middle stretch. You could almost make a case that it’s a story about co-extensive alcoholism. Winslow goes from refusing to drink with Wake to drowning alongside him in liquor, and then things start to get really crazy. Mermaids, tentacled monsters, and that damn gull peck away ever faster at Winslow’s sanity. If he can just hold out until his replacement arrives, he’ll be fine.

Of course, The Lighthouse must go fully rococo in its final stretch. You don’t seed your film with glimpses of mermaids and portents of madness and then pull back. I had to marvel at the total commitment of all involved in this tale of foamy madness. It feels as if you’re lashed to the mast of a ship being pulled to your own demise by the beam of a mad light. I happily drowned in this crazy film.

Featured image: L-r: Willem Dafoe and Robert Pattinson in ‘The Lighthouse.’ Courtesy A24.