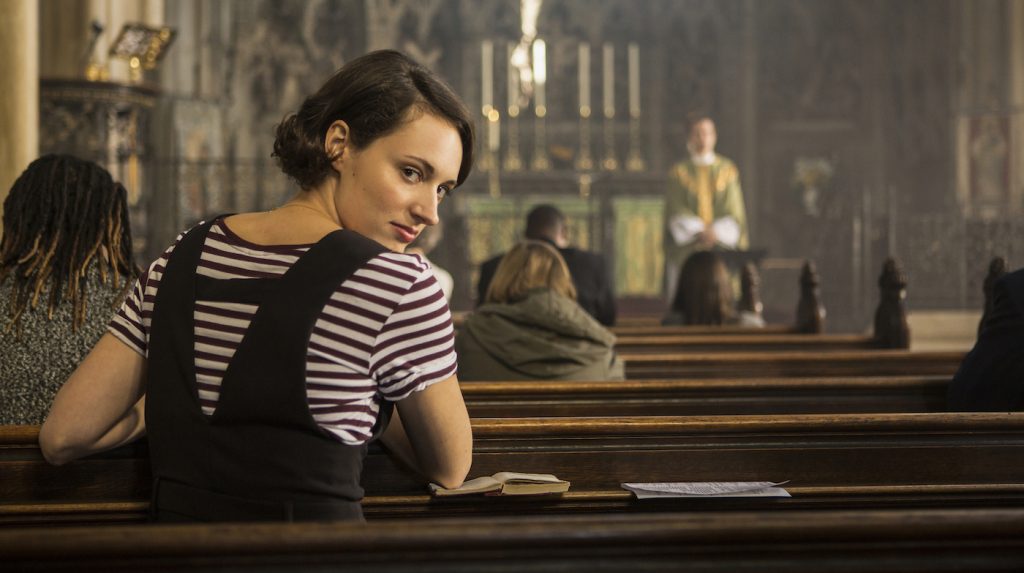 There’s no such thing as flawless art. Flaws are baked right into anything a human being creates, and often they are hard to disassociate from the strengths that make any art worthwhile. Yet I’ve heard several people call Fleabag‘s second season flawless, and I’ve been hard-pressed to argue the point. Few shows on television are as personal, raw, and fearless as what Phoebe Waller-Bridge has created here, which is full of its creators’ idiosyncrasies, which in turn are a part of her brilliance. Somehow Waller-Bridge took everything that made season one such a sensation and improved upon it. The pathos. The heart. The fourth-wall-breaking relationship between Fleabag herself and the viewer.

In fact, it’s hard to fathom another series that so effectively makes the viewer complicit in the action on screen. You don’t watch Fleabagas much as act as her confidant. Which, of course, is part of the point. When Fleabag isn’t making egregiously poor decisions or trying, and failing, to connect with the people she loves, she’s confiding in you, the viewer, about how she feels about what you’re witnessing on screen.

Enter cinematographer Tony Miller, who had never worked on a comedy before. Nominated for an Emmy for his work on season two’s premiere, Miller helped create a funny, tense, and ultimately heartbreaking episode that revolved mostly around a restaurant dinner table. The show’s main characters were all accounted for—Fleabag, her tightly wound sister Claire (the brilliant Sian Clifford), her sister’s grotesque American husband Martin (Brett Gelman), her more-or-less evil godmother (Olivia Colman), her reticent father (Bill Paterson), and a newcomer, a priest (Andrew Scott) who will be officiating her father and godmother’s wedding. The priest will end up becoming Fleabag’s love interest throughout the season, a storyline that sounds slightly unplausible on paper but is realized on screen with heartbreaking specificity.

“The first episode around the table in the premiere, it’s just pinging all over the place,” Miller says. “The only way you can get through that as a cinematographer is to light the psychological aspect of the characters and try to reveal their real feelings, and that means contrast.”

The dinner is interrupted by a shocking development—Fleabag’s uptight, hugely successful sister (and polar opposite in nearly every way) Claire has a miscarriage in the bathroom. Although the sisters are hugely different, they are sisters. Their love for each other is never questioned. Fleabag wants and tries to help, with mixed results.

When you talk about Fleabag, you usually begin by talking about Waller-Bridge breaking the fourth wall. In what could be a comedy killer in lesser hands is here one of the show’s many surprising coups.

“In a way, I become a player in the drama,” Miller says. “Normally as a cinematographer, you’re distant, but in Fleabag you’re absolutely connected to her.” The camera acts as “another player in the company” rather than just a portal through which we view her chaotic life unfolding. “Despite her despicable behavior, we have to like her, because if we like her, we become implicated in her journey.”

“What was important to me was that the direct relationship with the camera makes us [the audience] elemental to the story,” Miller says. “The success of the show is that we all identify with her in some way. That’s why breaking the fourth wall is so difficult and so utterly important. It can easily be clunky, so I tried to create a fluidity so it feels natural. The camera moves in a cinema verite style that develops very directly off of the drama.”

As portrayed by Waller-Bridge, Fleabag is a deeply funny, deeply maladjusted adult. She is harboring some major trauma due to the death of her best friend and business partner Boo (an excellent Jenny Rainsford—frankly, the entire cast is excellent). It’s unclear at the beginning of season one, but once you realize that Boo is dead and all her scenes are flashbacks, every time she appears onscreen you’re reminded how much grief Fleabag is carrying, or perhaps to put it more accurately, hiding from everyone else.

“Boo’s death informs all her decisions and her sense of self-loathing and all that goes with it,” Miller says. Instead of filming Boo’s scenes in a way that indicates to the viewer this is a flashback, Miller shot all those scenes as if they were happening now because, in Fleabag’s mind, these moments with Boo are happening now. She is reliving them, over and over again.

Season one ended with the full picture of what caused Boo to step into traffic, the source of much of Fleabag’s self-destructive behavior. It was due to something Fleabag did herself; she slept with Boo’s new boyfriend. In a misguided attempt to try and get said boyfriend to feel bad for her, Boo thought she’d get herself hit by a bicycle and then he’d visit her in the hospital. Instead, she gets hit by a car. She dies.

“I’m very close to Phoebe, she’s such an amazing person and human being, and I think if I didn’t feel like I emotionally understood what she’s trying to say in this drama, I couldn’t’ do it,” Miller says. “I’m known for doing dark, noir-ish thrillers and period dramas, so this is totally different from what I normally do. And I’ve found it very difficult because the emotional subtext of Fleabag is huge. It’s not just a comedy-drama, it goes much deeper than that. The dysfunctionality of families, of relationships, how we reveal and don’t reveal ourselves. So I tried to light that around each scene, just in a way that I would with drama, and yet make it feel like it was naturalistic.”

By the time season two has begun, Fleabag has attempted to get her life in order, yet all it takes is that single dinner with her family to throw all her best-laid plans into disarray.

“There’s a sense that these episodes, especially in the second season, she’s on a journey of questioning faith and wanting to be a better person,” Miller says. He also marvels at how expansive a collaborator that Waller-Bridge is. “Phoebe is the most generous actress and showrunner I have ever come across. When we’re tight up against the schedule, she’ll give eight takes to her fellow actresses and then one herself. It’s just so generous. It’s the same way she’s written it. To have that self-insurance and confidence, and be so kind in each moment on set, it’s just phenomenal.”

Part of the intimacy Miller conjures with the camera can be credited to the decision to almost exclusively go hand-held. “Apart from two or three steadicams, every single shot is handheld,” he says. “And that was because we wanted to make this cinematic. Hand-held gave me an intimacy to the drama, to all the characters, and so that was a key element.”

While Fleabag is always funny and often very moving, it looks gorgeous throughout. Miller says he credits some of that look to his favorite painter.

“I got brought up in Holland, and I was dragged around to all these museums, and you’ll find out why I’m fascinated by Edward Hopper,” he says. “What’s not lit often reveals what’s true about the character. Edward Hopper creates huge loneliness in his frames. Doing that tells us a story, and it makes us make imagine what’s off the frame. That’s what I’m trying to do with the cinematography. Because Fleabag’s so layered, it’s so important that the cinematography emotionally underscores the drama.”