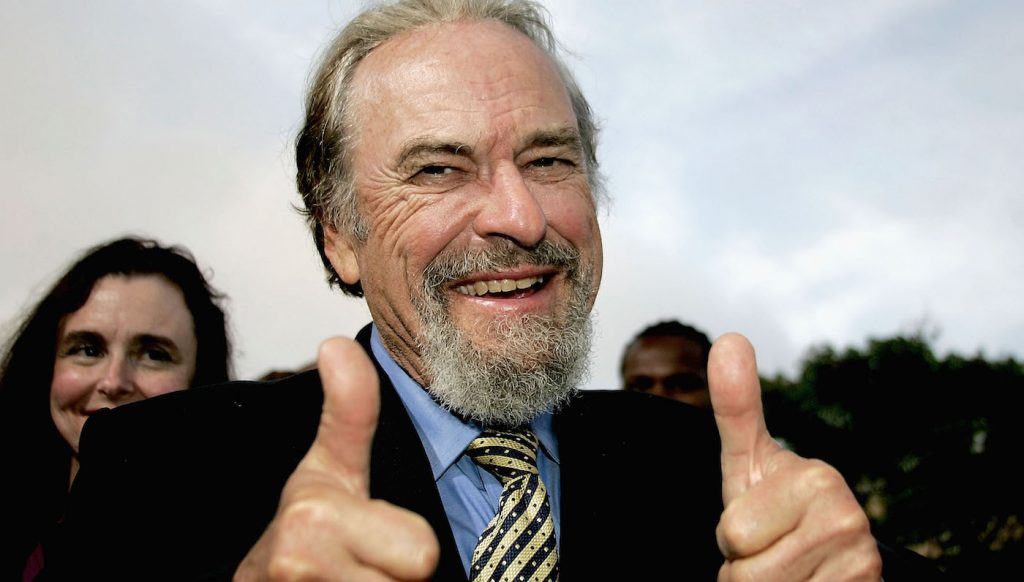 Rip Torn, the talented actor of stage and screen, has passed away at 88. Torn earned an Oscar and Tony nomination, along with six Emmy nominations (he won in 1996) over the course of his long, singular career. He is likely best-known for his role as Artie on HBO’s groundbreaking The Larry Sanders Show. Artie was the tough, occasionally insouciant, yet surprisingly tender producer who steered late-night talk show host Larry (Garry Shandling) through cataclysms big and small. It’s said often—too often—but it couldn’t be more valid here: nobody could have played Artie as well as Torn. Bracingly funny, slightly unhinged, and consistently surprising were some of the ways you could describe his performances. With Torn, you never quite knew what you were going to get, but you were eager to see where he’d take you. If you haven’t seen Torn’s work, just watch this trailer for The Larry Sanders show—the 0:39 mark is pure Torn.

Torn had a long, fruitful career on the stage, too, playing Richard Nixon, Walt Whitman, and Judas Iscariot. His received his only Tony-nominated playing a deeply troubled young man in Tennessee Williams’ “Sweet Bird of Youth” in 1959.

Yet it was on the small screen as Artie, and then onto larger productions in film, like his role as Zed in the original Men in Black trilogy, that gave millions of people access to his unique talent. More recently, he played the CEO of General Electric in Tina Fey’s sensational 30 Rock.

Torn was also well known in Hollywood for tussles and trouble off-camera, including a dust-up with Dennis Hopper (each accused the other of pulling a knife) over a role in Hopper’s Easy Rider (it eventually went to Jack Nicholson). He also got into it with Norman Mailer on the set of Mailer’s Maidstone, getting into a real fight that ended up becoming the turning point of the actual film they were making.

Through it all, Torn was a beloved presence on stage and screen, and his colleagues (and many folks who just plain loved him) have now taken to social media to pass along their feelings. Will Smith, Seth Rogen, Albert Brooks and more pay tribute to Torn:

R.I.P Rip Torn. He was so great in Defending Your Life. I’ll miss you Rip, you were a true original.

“Artie” from “The Larry Sandere Show” is every executive I ever worked for, only with Rip Torn adding his personality to the mix. An exceptional character from an exceptional artist. #RIPRip https://t.co/aU9fTFV839

Rip Torn was incredible. His work on The Larry Sanders Show was hysterical but nothing is better than the way he says “Big Bear” in Defending Your Life. I still laugh just thinking about it.

I feel extremely lucky that I once got to be in the same movie as the incomparable Rip Torn. He is at the height of his powers in this classic Warner Bros film “Payday.” They don’t make em like Rip anymore. pic.twitter.com/p1cPauD3sL

Looking back on decades of Rip Torn’s work and can’t think of a single performance that could have been bettered by another actor. One of a kind. RIP.

Rip Torn has just died. A lot of folks don’t know that he helped advocate alongside James Baldwin and Lorraine Hansberry to push RFK/JFK to make “a moral commitment” on civil rights. RIP #RipTorn https://t.co/1wXVGAZwK3

“Never think you’re better than anyone else, but don’t let anyone treat you like you’re worse than they are.” Rest in peace, Rip Torn, an unapologetic maverick and gifted actor whose singular presence on screens big and small was always welcome. pic.twitter.com/BnQEwzuFgz