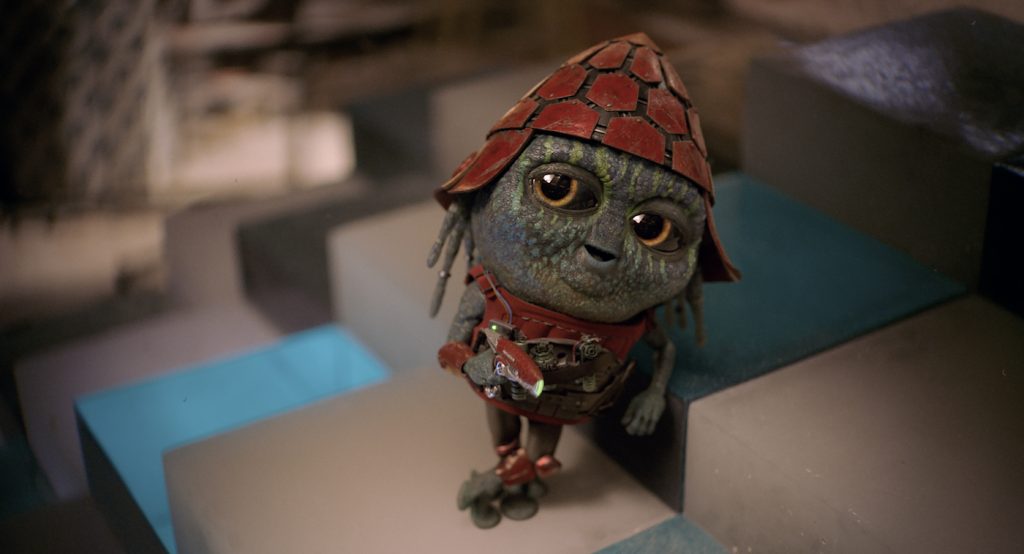 How a Global VFX Effort Animated the Lovable, Lunatic Aliens in Men in Black: International

From Sony Pictures Imageworks headquarters in Culver City, California, visual effects supervisor Dan Kramer helped coordinate a worldwide array of CGI artists to produce some 2000 VFX shots for the aptly named Men In Black: International. Kramer, who previously animated Cloudy with a Chance of Meatballs and Hotel Transylvania before switching to live action on Tom Cruise thriller Edge of Tomorrow, joined forces with visual effects supervisor Jerome Chen to manage the massive CGI pipeline feeding MIB: International. Kramer says, “I think we wound up with 36 CG aliens—either fully CG or extensions, head replacements things like that—and for each final design there’s probably somewhere between five and 50 variations for as we tried to find the look.”

Complicating matters: Many cooks in the kitchen. Kramer explains, “The producers and the director F. Gary Gray and the studio were all very involved so we wound up doing character reviews with a team of approvers. Finding consensus among so many people for something as subjective as a character can take a while.”  To populate the movie with “Hive” aliens that everyone could agree on as being worthy antagonists to secret agents M (Tessa Thompson) and H (Chris Hemsworth), Kramer and Chen worked with VFX artists from Australia, Canada, Zealand, London, and San Francisco.

Vancouver-based DNEG created Vungus, the charmingly sleazy Jababian party animal, by beefing up actor Kayvan Novak’s motion capture performance. Kramer says, “Kayvan was so charismatic and engaging on set with Chris and Tess, just watching the dailies without any CG, it was a really fun sequence. Vungus was originally supposed to be an ugly, 300-pound character but we didn’t want him to be creepy. If we went too ‘alien,’ it would be hard to capture the actor’s performance so we didn’t stray too far from human proportions and steered Vungus toward having two eyes, a nose, and a mouth.”

New Zealand’s Weta Digital designed little Pawny, the scene-stealing doll-sized alien. Sony Pictures Imageworks then added mechanical details and character nuances to match Pawny’s expressions with wisecracks voiced by comedian Kumail Nanjiani. On the London MIB soundstage, Kramer says, “We had a little figurine painted to look like Pawny and placed it on set as a visual reference for the actors. Also, with a character that small, the depth of field is quite shallow so the focus puller needed to see that. And we wanted to give the DP the opportunity to light something physical. All of that gave our animators a basis in reality.”

London’s Territory Studio crafted motion graphics and holograms for the Men In Black offices while Montreal-based Rodeo FX handled the computer-generated baby Tarantian alien whom Thompson’s “Molly” character first meets as a little girl. “The Tarantian made itself look like one of Molly’s stuffed animals and hid in her bedroom. It’s Molly’s introduction to the world of aliens and really important. We gave Rodeo the baby Tarantian designs and they developed them into this cute, loveable character.”

In Melbourne, Australia, Method Studios devised Luca, the adult version of the baby Tarantian who now serves three-armed villain Riza Stavros (Rebecca Ferguson). Kramer recalls, “We initially shot Spencer Wilding, this very tall actor, and we were just going to replace his face. But then we discovered that it felt a little too much like a human wearing a mask. We went back to the drawing board and Method’s super Glenn Melenhorst came up with the idea of [digitally] beefing up the existing actor to give him a larger [chest] trapezoid and shoulders. Then we took Spencer’s jacket, warped it over his chest, removed the shirt and replaced it with a tank top. This quasi-CG transformation took Luca out of the guy-in-a-mask look and made him more imposing, like a linebacker.”

As Kramer shaped contributions from far-flung vendors into a cohesive Men in Black universe, he came to savor the Skype-enabled VFX review sessions. “These houses have such a strong talent base, and then the visual effects supervisors who lead them are amazing in their own right,” Kramer explains. “I’ve been doing this a long time so I’ll have an idea for how to solve any given problem. But when you talk things through with a bunch of smart people who have different experiences, they might attack the problem in a different way where it becomes this fun, collaborative process. For me, that’s what’s so exciting about the visual effects field. You’re always learning.”

Men in Black: International is in theaters now.