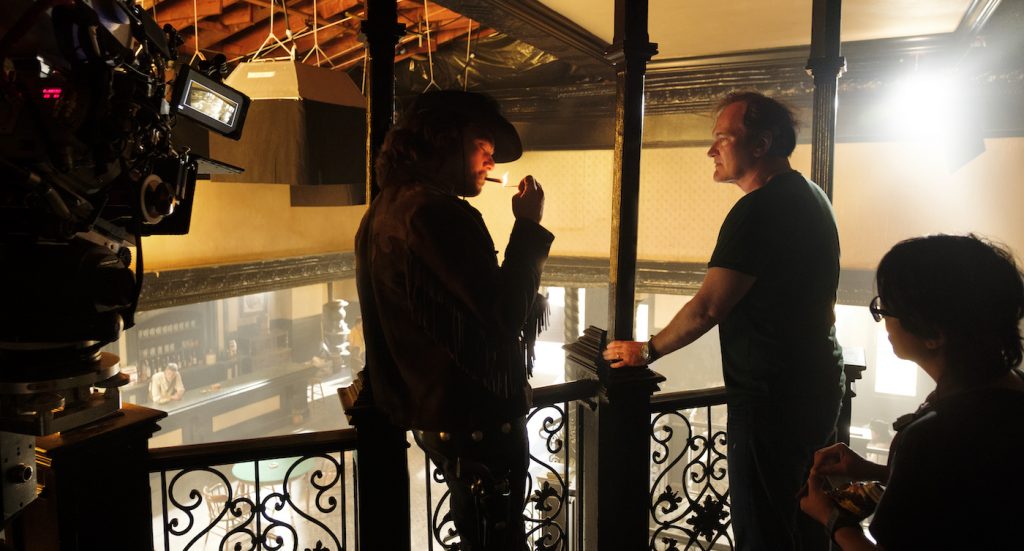 Quentin Tarantino has long said that his tenth film would be his last. That means his upcoming Once Upon a Time in Hollywood is his penultimate movie, and we’ll only have the auteur around for one final movie after that. That’s sort of depressing, is it not?

It’s wonderful to be able to set the terms of your own career in such a way, and Tarantino has had, objectively, an incredible career. Why wouldn’t he want to go out in precisely the way he’s designed? It’s like he’s taking the meticulous attention to detail he pours into his scripts and translating them into his own life. Ten and done. Oh, and all ten films are originals. Tarantino has never shot somebody else’s script. He’s never done a sequel. He’s never done a franchise. Fine. We’d love for him to stick around making movies forever, but you also have to respect his desire to decide exactly when he’ll move on and how he’ll do it.

But what if Tarantino designed himself a loophole (sci-fi style, we might add) so that he could make his Star Trek film? In an intriguing conversation with Cinemablend’s ReelBlend Podcast, Tarantino discussed a way he could end his career directing the Star Trek film he’s been teasing us with. This is based on a story idea he pitched to J.J. Abrams and Bad Robot, which has then been handed off to screenwriter Mark L. Smith. Making a franchise film with somebody else’s script (albeit conceived and worked over by Tarantino himself) would be an outlier in his originals-only career. Unless Tarantino gave himself a way to do it on his terms. Here’s what he said to Cinemablend:

“I guess I do have a loophole, [if] the idea was to throw a loophole into it. Which would be [to go], ‘Uhhh, I guess Star Trek doesn’t count. I can do Star Trek … but naturally, I would end on an original.’ But the idea of doing 10 isn’t to come up with a loophole. I actually think, if I was going to do Star Trek, I should commit to it. It’s my last movie. There should be nothing left-handed about it. I don’t know if I’m going to do that, but that might happen.”

Tarantino is clearly drawn to this Star Trek film. In fact, he told Cinemablend another way he could look at it is that ending with Star Trek would offer up a glimpse at what a totally different career could have looked like:

“There also is another thought process going on where it’s like, yes, [my last movie] could be original. On the other hand, maybe that could show a different career I could’ve had. Whereas maybe [Once Upon a Time in Hollywood] is my last original — I’m not saying this is the case — but maybe this is my last original, and Star Trek or any other thing, a book or something like this, is the career I could have had if I wasn’t just writing everything all the time. Writing always originals. Maybe I could have had a different career if I looked for other people’s scripts, or if I wanted to find a book to be inspired by, and do an adaptation of. That would’ve been a different career. And maybe that could be fun to explore on the 10th [movie]. I don’t know. I mean, I’m making all this up as I go along, but those are two different ways I could look at it.”

We’ll see how this all shakes out. For now, all eyes are on Tarantino’s Once Upon a Time in Hollywood, which boasts an insanely great cast and bowed to extremely enthused reactions at Cannes Film Festival this past May. The story tracks fading TV star Rick Dalton (Leonardo DiCaprio), his longtime stunt double Cliff Booth (Brad Pitt), and their proximity to Sharon Tate (Margot Robbie), who is Dalton’s next-door neighbor. Tate, of course, is the most famous victim of Charlie Manson. She was killed, along with four other people, by Manson’s murderous acolytes on the night of August 8th, 1969. She was eight months pregnant at the time.

So while we’re very intrigued at how this entire Star Trek thing might unfold, for now we’re just thrilled there’s a fresh Tarantino film coming out very soon.

Featured image: Leonardo DiCaprio and Quentin Tarantino in Columbia Pictures “Once Upon a Time in Hollywood.” Courtesy Sony Pictures.

TAGSOnce Upon a Time in Hollywood Sony Pictures Star Trek