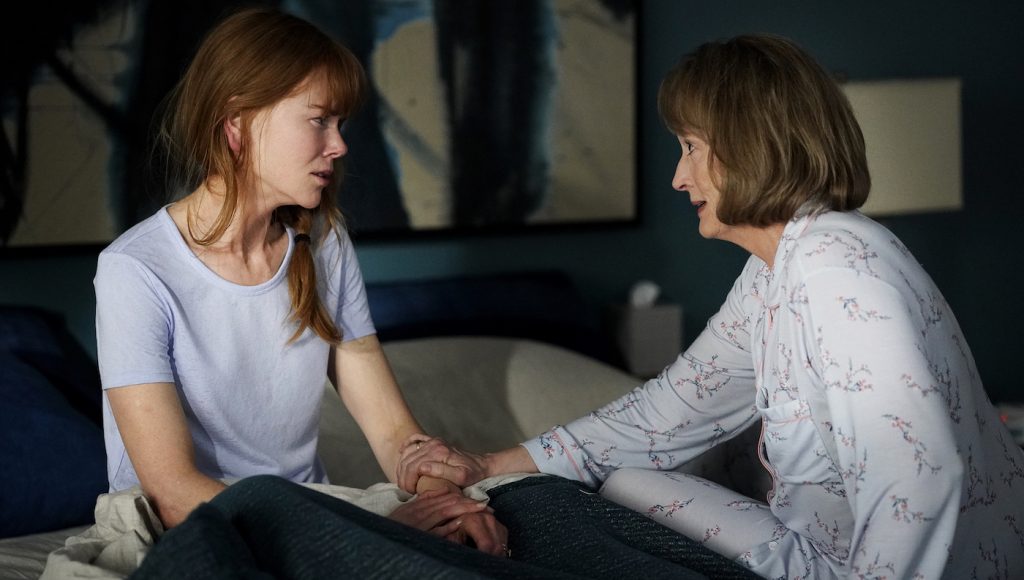 If you had not one but two critically acclaimed HBO series under your belt, you’d be permitted to gloat. If those series were wildly different yet deliciously unforgettable, you might even be expected to brag a little. But that’s not production designer John Paino‘s way. The laidback pro was happy to discuss his work on Sharp Objects and Big Little Lies without any unnecessary braggadocio. With Big Little Lies back for season two, Paino’s work is once again front and center.

The shows have a few things in common. They’re led by a cast of superb actresses. They deal with violence at home. They center on women trying to deal with, or deny, said violence. And…that’s more or less where the comparisons end.

Paino and I began our discussion with Sharp Objects. The series, created by Marti Noxon and based on a novel by Gillian Flynn, starred Amy Adams as the talented but troubled reporter Camille Preaker. She heads home to her small Missouri town of Wind Gap to write about a gruesome murder. What she ends up writing about is her own past, and the trauma she had tried— and failed—to bury there. We finished with Big Little Lies, which plunged into the seemingly perfect lives of upper-class mothers in their gorgeous California beach town, but which revealed the violence, domestic and emotional, at the heart of their Pacific idyll.

Sharp Objects has, in my humble opinion, one of the great sets on any TV show in recent memory, the Crellin Manor, where Camille grew up and where her mother, step-father and little sister Alma still live.

They wanted to shoot in LA, and we looked at a lot of Victorians in LA, but most have been converted to museums, it was very important that she be on a big estate. We couldn’t find anything that had a big piece of property around out. Most Victorians in LA have houses built around them. Our locations manager was driving around Reading, California, and someone had decided to build a replica of a Victorian in the middle of that town. We used that as the basis of the exterior, while we built the interior on a stage on the Warner Bros. lot.

What kind of changes did you make to the house?

We painted it, we’d put a door or a window here or there. The inside of that house was not Victorian at all. He had basically made the outside the Victorian, but the inside was very strange…you walked into the door and right into a kitchen. Even if we went into a real Victorian, they tend to have very small rooms and aren’t very film friendly. We thought about building one, but Jean-Marc Vallée wasn’t happy with them being on ranches in downtown in LA, and it didn’t feel like the south.

The Crellin Manor becomes a house of horrors by the end of the series. How did you play with this set to hint at all the trauma that place has witnessed, and in a way, hidden?

I’m very much about color and tone and texture. I look at being a production designer as creating tone and atmosphere. The details are important, but the overall feel is the main job, what envelops you when you walk into a house or an exterior. When I was thinking about Adora (Patricia Clarkson), I was thinking about this place being her gilded fantasy world. She’s wealthy, she’s someone who definitely would have hired a decorator from Charleston or Atlanta. The house was not going to be an antique Tennessee Williams deal, with cobwebs in the corner. There’s so much southern Gothic that is like that. I believe in the book, the house is old and painted white, so I really wanted to bring color into it. I was taken with the idea of someone who was poisoning people. When you go to the south, there’s a really fecund, swampy, stickiness to it. Vines growing on things. That to me was swampy and poisonous.

Adora Crellin is one of the great monsters in recent TV. Patricia Clarkson is so phenomenal. Her bedroom, in particular, seems like an extension of her particular brand of brutality.

Adora’s bedroom floor is made of ivory, which I thought was a great thing in the book. I looked everywhere for examples for ivory floors—elephants tusks, walrus tusks—but I couldn’t find any examples. It just doesn’t exist. It presented a two-fold problem; I wanted when you to look at the floor and think, wait, that’s made of ivory. But I also wanted it to feel real for a house that was built in the 1840s. So we spent a lot of time drawing that and designing it. I think we were successful. We made a border insert in the room as if you took tusks and cut them like wood. That became a decorative border around the room. It’s an important plot point for when Amma (Eliza Scanlen) is putting teeth into the floor of her dollhouse because the dollhouse is a replica of the house.

The rest of Wind Gap is hardly as beautiful as the Crellin Mansion.

The house is a character, the crucible where this all happened. I was worried because Southern Gothic is a trope that’s been mined over and over again. I wanted to figure out how we could portray a more modern version of Southern Gothic. I looked at neo-noir and stuff, but I also looked at the specifics of that part of the world. Wind Gap is a rust belt town, it has been hallowed out. There are a few rich people holding onto what it was like in the 50s and 60s, but there’s a lot of poor people there, too. That’s true for a lot of places. You go to Atlanta and go to Buckhead, which is very posh, then you go to Macon, a little outside, and it’s blue-collar and very working class. There’s a huge difference.

I know you can’t tell me much about Big Little Lies season two, but overall did you find that the look of the show is evolving at all?

Most of the locales are the same as season one, but our new director (Andrea Arnold) wanted to take our gals out on the beaches walking, instead of the café in the first season that was built on a stage. The second season, we were able to build a new café right out on Monterey’s most picaresque point, Lover’s Point, where you see the ocean and Cyprus trees, with a pergola and circular coffee kiosk, all made out of raw wood.

Yup. Meryl’s Mary Louise Wright is now involved in this story. And Jane (Shailene Woodley) is moving up in the world. The big change in season two is we’re out in the world more, people are walking in the woods and on the beach.

I’m curious about the location of season one’s big climax, at the school staircase where Perry meets his fate. That was a particularly nasty looking place to take a tumble.

The actual staircase was leading down to another area. What we did was we built an insert in it, as if there was some construction on the staircase with some rebar sticking out. Perry ‘slipped’ [laughs]. It’s a really long staircase, and everyone’s been drinking, arguing, fighting, and then he slips and he’s impaled on some rebar. We augmented the actual staircase with some construction things, and we built a false landing in it that he would end up on, impaled. I wonder if the impaling is in the book? The accident is, but I’m not sure if the impaling is. Innocent until proven guilty! [Laughs]. But that’s what the second season is all about, the knives are out. The case is not closed.

Big Little Lies is now in its second season on HBO.