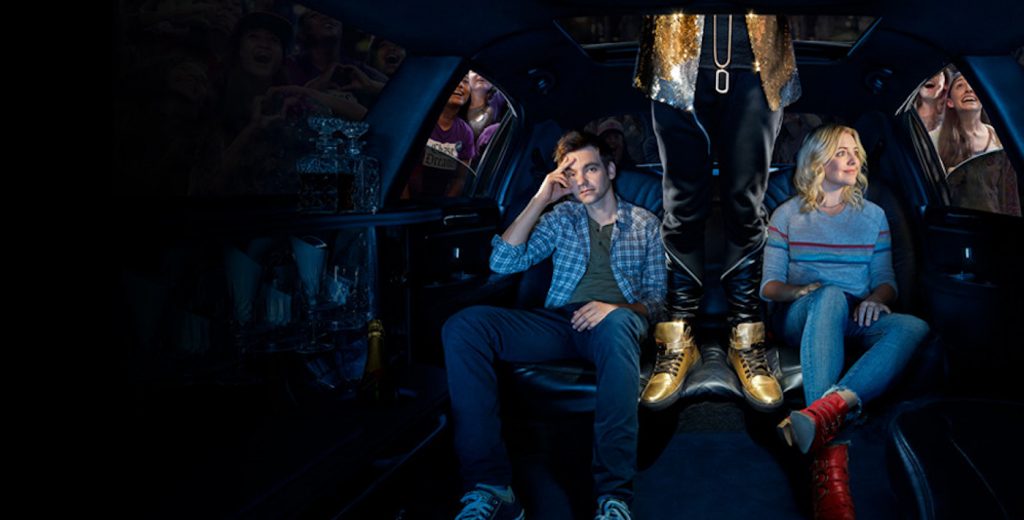 If you haven’t watched Comedy Central’s The Other Two, I’m jealous of you. It is one of this year’s most consistently funny shows, with a joke-per-minute ratio that rivals some of our recent standard bearers, like HBO’s Veep. Go watch it and see for yourself. Created by SNL alums Chris Kelly and Sarah Schneider, The Other Two centers on a young musician named Chase Dreams (Case Walker), whose rapid rise to fame becomes a source of both humiliation and opportunity for his two siblings (the titular other two), Cary (Drew Tarver) and Brooke (Heléne Yorke). Their mom is played by the unbeatable Molly Shannon, with Chase’s manager Streeter (the perfect name) played by Ken Marino.

The songs that catapult Chase to overnight superstardom are equal parts well-crafted pop tunes and painfully funny comedy pieces. They were written by an actual pop songwriter with a stellar career in music, Brett McLaughlin, who counts Ariana Grande, Selena Gomez, and Troye Sivan among his clients. For The Other Two, McLaughlin worked with Kelly and Schneider to give Chase’s hits the musical chops to make them plausible while reveling in the inherent absurdity—and abundant opportunity—in writing tunes like “Marry U at Recess,” “My Brother’s Gay and That’s Okay!” and “Stink.”

“My involvement came from going to SNL last January with Troye Sivan when he was the musical guest that week,” McLaughlin says. “It was honestly a religious experience walking around the set, and having my songs performed on the show, I just told my manager I needed to work with these people. I’d been writing songs for Drag Race for four years now. I love comedy and grew up watching SNL, and my agent told me that Chris Kelly and Sarah Schneider just left to make their own show.”

McLaughlin says his first meeting with Kelly and Schneider was wonderful, spent primarily laughing and talking about musical references. The creators had a specific vision for how they wanted Chase to sound, and thanks to McLaughlin’s years of experience writing pop hits, he was more than prepared. One of the many refreshing things about the consistently hysterical series is that Chase Dreams is not a child monster. He’s a sweet kid with actual talent writing tunes that are sonically pleasing while also hysterical. He’s also hugely impressionable, and he’s swayed by not only both his siblings, but Streeter, producers and others who meddle in his music to disastrous effect.

“It was really refreshing for me to write for a character who wasn’t an asshole,” McLaughlin says. “He wasn’t being given everything and he wasn’t rude to the people around him. Even the songs, especially ‘My Brother is Gay and It’s Okay.’ It’s a sweet song about his love for Cary. We were able to make a One Republic, Mumford and Sons-like pop anthem for his love for his brother.”

As funny as writing a song about your brother being gay (and that’s okay!) without telling him first undeniably is, an important element of The Other Two is how it eschews easy laughs and mean spirited jokes for richer material. The relationship between the siblings is hilarious, but also heartfelt. Cary and Brooke are a little hapless, but they also support each other and their baby brother. And the music, while riffing on pop stardom and having fun with its tropes, is not intended to mock anyone.

“I just spent a lot of time with Chris and Sarah talking about the characters, understanding that Chase isn’t an asshole and that the family really sticks together,” McLaughlin says. “I’d also thankfully seen the pilot and understood the world they had created. I was very lucky to be able to step in and make and contribute.”

McLaughlin’s process working with Kelly and Scheinder was also a lesson in efficiency.

“Chris and Sarah sent me the majority of the lyrics, and I’d tweak them,” he says. “Lyrically, we weren’t writing aggressive pop music, and we weren’t degrading anyone. It was so nice to not dumb down Chase’s character in order to access the level of fame he has from the start of the show.”

As for the parallels between Chase and Justin Bieber, McLaughlin says that Chase is early Justin, before the bad boy phase (Bieber recently challenged Tom Cruise to an MMA fight, on Twitter, for some reason). “There was a sweet introduction to Justin,” McLaughlin says. “Throughout this first season, Chase stayed that sweet boy out to impress everyone.”

McLaughlin isn’t taking any heat off his fastball to write Chae’s songs, however. In fact, he’s using all that he’s learned to create a growing catalog of songs for him as he would any other budding pop star.

“If I’m writing a song for Troye Sivan, I’m going to include the same skill set that I’d use to write for Chase,” he says. “I’m using the same instincts for writing a catchy song. Actually, sometimes writing a pop song for someone like Chase is more of a challenge than writing something more artistic. If you’re writing something artistic, the goal isn’t to make something super catchy. When writing for someone like Chase, it’s harder because it has to be funny, catchy, it can’t be dumb, it has to believable. Also, each song has to make you think he’s growing as an artist.”

Chase’s growth is evident in just how different the songs in season one are. His first hit, “Marry U at Recess” is a classic made-in-my-bedroom/early Bieber tune. Then “My Brother’s Gay And That’s Okay!” is an acoustic jam, a little more refined. This leads to “Stink,” Chase’s first foray into dipping his be-sneakered toe into the bad boy phase. McLaughlin says he autotuned “Stink” to high heaven, a major departure for the budding star.

“The autotune in ‘Stink’ was a creative choice to give it that overproduced sound,” he says. “We went from something under produced to the exact opposite. That makes it sound like Chase is evolving.”

In the season finale, Chase performs a drastically toned down version of “Stink” at the VMAs, at Brooke’s suggestion. It does not go well.

“It was so funny to reinterpret ‘Stink’ as an orchestral number with gospel vocalists. I grew up in the age of the VMAs, with Britney’s iconic performances, so to be able to do that with one of these songs, with Chase trying to strip it back and having this really not work, was very fun.’

The Other Two has been renewed—blessedly—for a second season. McLaughlin will be back to help Chase Dreams keep evolving, keep pushing, keep taking two steps forward and one to four steps back, depending upon whose advice he’s listening to at the time.

“I utilized every tool in my toolkit on this show,” McLaughlin says. “Making sure that, first and foremost, they’re good songs. You don’t make a funny song by making it stupid.”