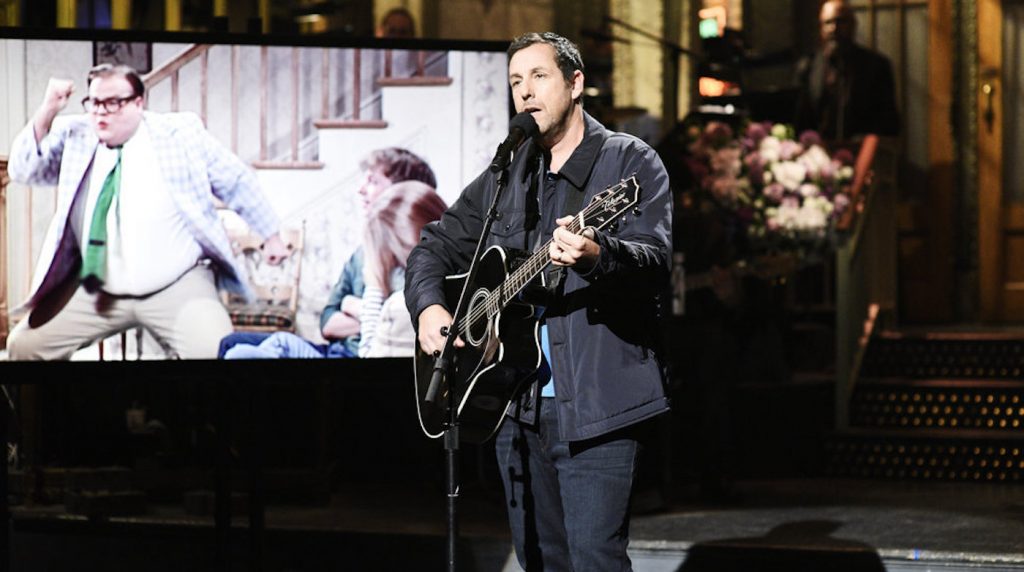 If you weren’t in front of your TV on Saturday night and missed Adam Sandler’s return to Saturday Night Live, we’ve got you covered. This was—shockingly—Sandler’s first time back to SNL since he left the show—or, in his words, was “fired”— back in 1995. The show utilized Sandler’s musical chops on several occasions, but none were as profound and touching as his tribute to fellow SNL alum, the dearly missed Chris Farley. Farley was one of SNL‘s biggest stars, rocketing to fame when he was on the show from 1990 to 1995. He died from an accidental drug overdose in 1997, at 33 years old, leaving a generation of fans and close friends like Sandler heartbroken.

This isn’t the first time Sandler has performed his song “Farley.” He’s been playing it on tour, but it has considerable impact and resonance to watch him play it on the very stage that Farley became a star. It is nigh on impossible to watch this video and not get emotional. Sandler closed the show with the tribute, which references some of Farley’s most beloved characters, including motivational speaker Matt Foley. The song also doesn’t shy away from Farley’s appetites, which his friends worried would lead him to an early death like it did John Belushi and John Candy. “He said ‘Those guys are my heroes, that’s all fine and dandy,'” Sandler sings.

What’s so moving about the performance is how Sandler isn’t really going for laughs. This is that rare treat in our age of perpetual snark; an earnest, charming tribute to someone Sandler loved. The fact that it manages to be funny, too, is a bonus. Watching Sandler eulogize his friend while clips of some of Farley’s most hysterical characters plays behind him is potent.