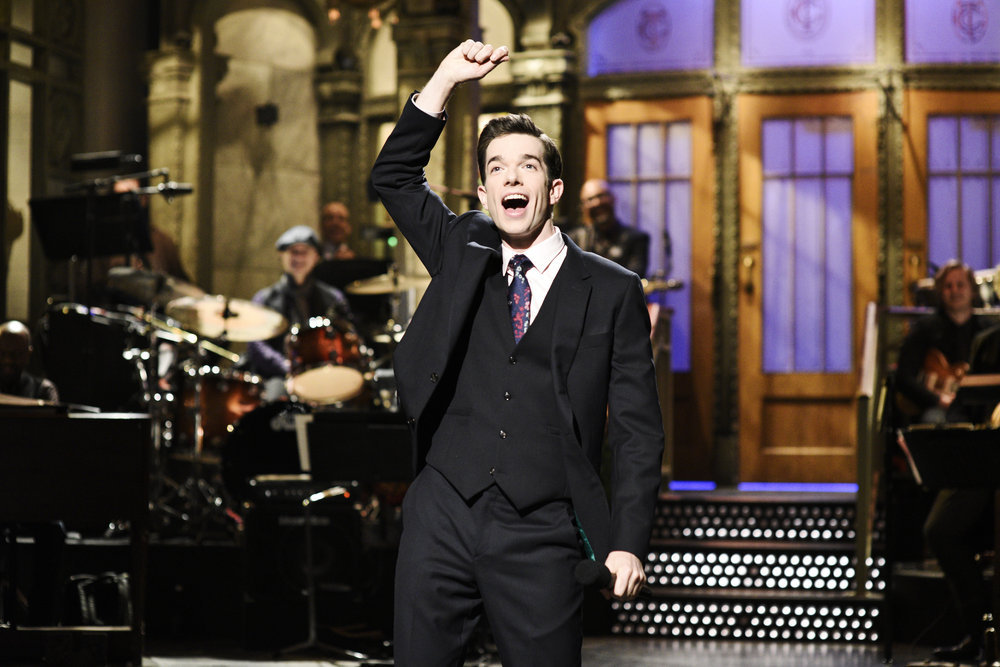 There were a lot of surprises out of Saturday Night Live this weekend, but how brilliant John Mulaney’s performed wasn’t one of them. The razor sharp former SNL writer flawlessly executed his hosting debut. Mulaney has been the driving wit of so many spectacular project, as well as his own stand-up career, so we’re thrilled to see him gaining more widespread exposure.

Mulaney’s monologue was gut-busting and we wanted it to go on for two hours. He was somehow able to weave together gazebos, CAPTCHA codes, and Sir Patrick Stewart in 7 minutes – and it actually worked. Luckily, his new standup special Kid Gorgeous at Radio City premieres on Netflix May 1.

Mulaney also tweeted out a behind-the-scenes fun fact revealing that two of the sketches are nearly a decade old, proving how universal his humor is. We’re sure he made some changes, but Mulaney disclosed that the Lobster Diner and Switcheroo sketches were written around 2010. They were nixed back in the day, but made it to air this weekend. Never give up!

This week sported some high profile guests including Robert De Niro as Robert Mueller squaring off against Ben Stiller as Michael Cohen. The Meet the Parents stars stunned audiences with the reunion and it was a solid sketch supported by Kate McKinnon and Beck Bennett. SNL alum Nasim Pedrad also jumped into a skit about Netflix documentary Wild Wild Country.

Mark your calendars! May 5!!!! #SNL pic.twitter.com/vKDX4gQJlX

Although we relished Mulaney’s performance, there is more excitement ahead. Donald Glover is going to pull double duty as host and musical guest on May 5. If you tuned into HQ Trivia Sunday evening, you’ll know that Childish Gambino is Glover’s musical alter-ego, based on a name the Wu-Tang name generator suggested. Glover is killing it right now between Atlanta, the upcoming live-action Lion King, and a little film called Solo: A Star Wars Story in which he plays mystery character Lando Calrissian. Jokes, jokes. We know how that story ends, but we’re pumped to see Glover reprise the role originated by Billy Dee Williams.

Primetime TV’s summer break is right around the corner, but SNL seems determined to go out with a bang.

Featured Image: John Mulaney during the Opening Monologue in Studio 8H on Saturday, April 14, 2018 — (Photo by: Will Heath/NBC)