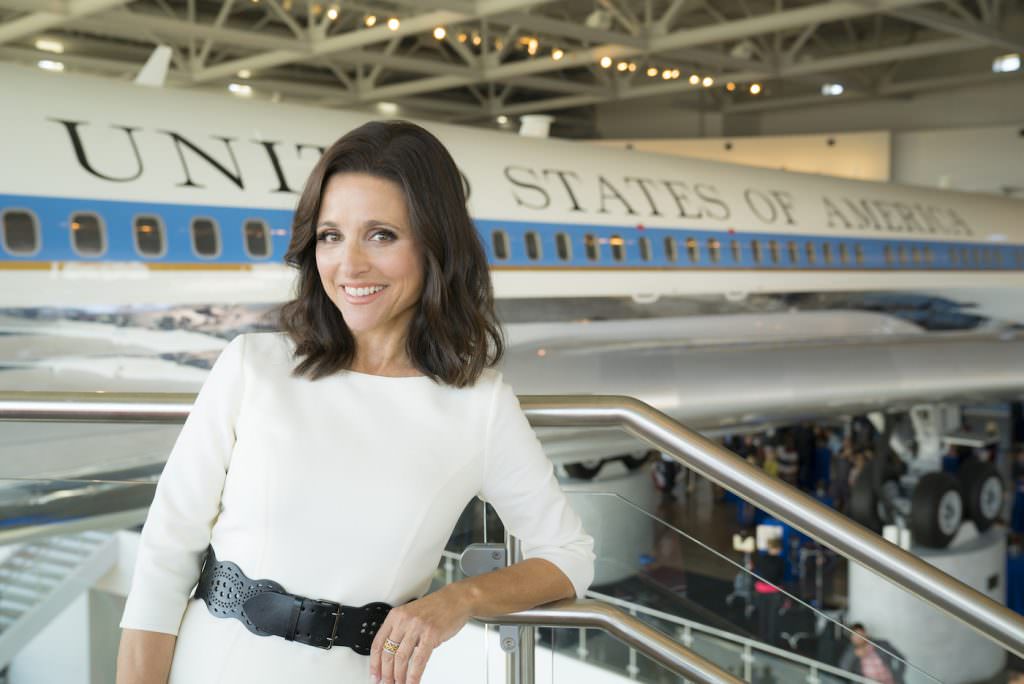 On the face of it, few things sound less intrinsically funny than “presidential library.” And yet for ten wickedly hilarious episodes this spring, HBO comedy Veep packed in more jokes per minute than any of its competition by tracking the self-glorifying quests of a narcissistic politician, expert in the art of personal attacks, who’s willing to say anything and betray anybody if it means holding onto power. Portrayed by Julia Louis-Dreyfus, Selina Meyer spends most of the season on a quest to memorialize her eight-month “legacy” as President of the United States in the form of a vagina-shaped library. When she’s not spewing obscenities at her underlings, the ex-president raises money for the Meyer Fund for Adult Literacy, AIDS, the Advancement of Global Democracy & Military Family Assistance, defined entirely by fat cat donors and their pet causes.

Writers David Mandel (Seinfeld) and Billy Kimball (The Simpsons) earned two of the show’s 17 Emmy nominations this year. Speaking from Paramount Studios lot after spending the day in the Veep writers room picking the brains of a former Al Gore campaign strategist, Mandel says, “”It’s not a conscious decision to extra-jam the scripts full of jokes. For me, it’s an evolution going from ‘Seinfeld’ to ‘Curb Your Enthusiasm’ to ‘Veep’ where the shows just get faster and faster and funnier and funnier.” Kimball adds, “There’s a type of comedy which is more moody, slower and character-driven. Our show is definitely on the joke-dense end of the spectrum.”

Since taking over show runner duties from Veep creator Armando Ianucci two years ago, Mandel has managed to create political satire in an era when outrageous behavior emanates from the White House on a daily basis. “Trump is omnipresent as we work on the show but we never forget that what we write now, in August, won’t air for a long time,” Mandel says. “We look at themes. For example, Trump’s myriad attacks on Muslims led to the idea of Selina dating a Muslim this past season. That storyline was directly inspired by Trump, but not based on a specific tweet or action.”

Well suited to an era of mean-spirited political discourse, Veep excels in the art of the shocking insult, as when Congressman Furlong (Dan Bakkedahl) says to dense congressman Jonah Ryan (Timothy Simons) “You’re about as welcome here as Jerry Sandusky at an open call for ‘Oliver.'” Kimball acknowledges the show’s nasty wit. “One of the things people love about Veep is the dirtiness of the insults,” he says. “We even keep a file for things characters can call Jonah so if we get two good insults in one scene, we save the other one for the next time we’re on the set so we can instantly come up with an extremely vile insult. Because our show is set in the high pressure world of politics, it’s easier to imagine people saying this kind of stuff to each other without getting punched in the face.”

Kimball picked up his Emmy nod for the “Georgia” episode, in which ex-president Meyer supervises an election in an Eastern European country led by a man with a hideously scarred face. Kimball found inspiration in the dioxin poisoning of real-life Ukrainian politician Viktor Yushchenko as well as his own experience. “I lived in Ukraine in 1994 worked on a foreign aid project for the United States Agency for International Development,” Kimball says. “Without going into too much detail, something about influencing a presidential election actually happened to me and for years, I’ve dined out on my Ukraine stories.”

“Georgia” also marks the return of frosty Finnish politician Minna Häkkinen (Sally Phillips), who greets Selina by commenting on her post-election recovery: “Your stay in the insane asylum has really agreed with you.” Kimball points out, “Everybody’s been tiptoing around, euphemistically calling it a ‘spa.’ The line is funny because Minna’s so matter of fact, with her sort of Nordic Asperger’s, saying the sort of thing that no human would actually say.”

Mandel penned the season finale “Groundbreaker” in which Selina dumps her Muslim boyfriend Ambassador Al Jaffar (Usman Ally) so she can run, again, for president. Mandel planted the seeds for the breakup earlier in the season. “In episode six, Selina decides it okay to date a Muslim guy because her political window has closed. She makes a joke how her political career ‘answered an ad on Craigslist and took a modeling job in the Angels National Forest where one can assume it was raped and murdered.’ I enjoy the line but the larger point is, everything would be different if Selina’s political window were open. And then along comes episode ten and the window opens, so what seems like a throw-away line in episode six actually becomes super important later in the season. Don’t get me wrong, I love jokes. But it’s really important to link all these things together throughout the season so that comments in one episode reverberate later.”

Working on the new season of Veep during uncertain times, one thing seems certain: Circumstances will change for Selina Meyer and her cynical cohort, but the characters won’t. “Nobody changes in real life either,” Mandel says. “That’s absolute bullshit. Any time people in a show wonderfully learn to re-evaluate their situation is no person I’ve ever met in my life. Not to get all ‘Seinfeld’ and ‘Curb-y’ about it, but people responded to those shows because they lacked that fake ‘lesson learned’ element. I’m almost 47 years old. I’ve never learned a lesson in my life. I’m still making the exact same mistakes when I was in college. I still procrastinate. I wait till the last second to do my work and then I sort of skate by at the last second and pat myself on the back for getting it done in time. At no point do I think to myself, ‘I should start sooner.’ Characters who reform and decide they’re going to start doing things differently — that doesn’t happen.”

So if Selina lacks the aptitude to become a genuinely compassionate leader, what can viewers expect from the show’s title character in seasons to come? Mandel says, “Over the course of the two years that I’ve been running the show with my team of writers, Selina lost the presidency and in dealing with that loss, she made very slight changes.” For example, Selina has routinely belittled daughter Catherine (Sarah Sutherland) and her relationship with girlfriend Margaret (Clea DuVall). “Now, Selina puts up with it and even embraces their relationship — when it’s politically expedient,” Mandel says. “These tiny little changes are actually what real life is about. That’s my take on things.”