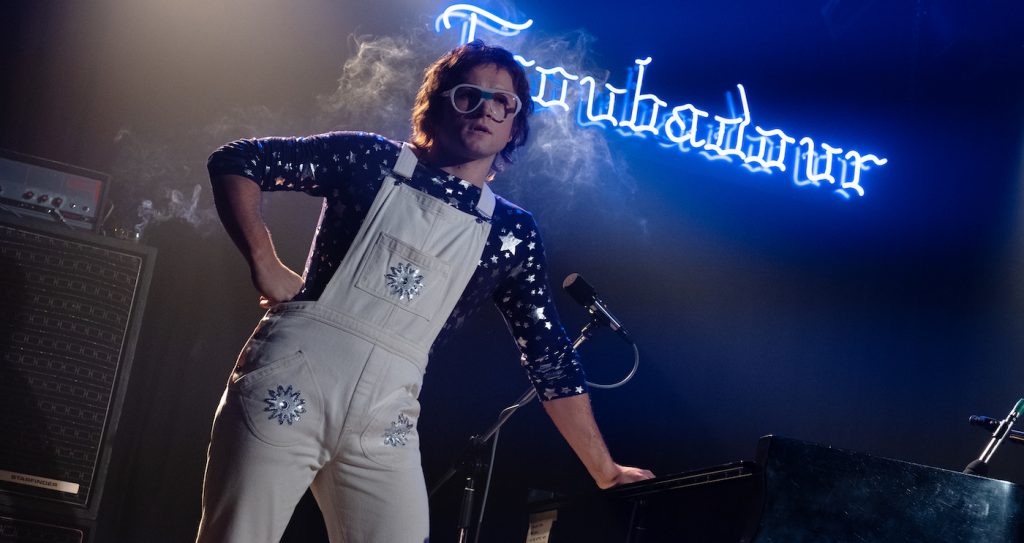 What does a nervous breakdown sound like? To be more specific, how can audio be manipulated to approximate Elton John’s headspace when he overdoses midway through the fantastical bio-pic Rocketman? That’s the kind of question re-recording mixer Mike Prestwood Smith faced on a daily basis while shaping the sonic highs and lows embodied by Taron Egerton‘s portrayal of the iconic piano man. Rocketman director Dexter Fletcher also helped make the Queen bio-pic Bohemian Rhapsody but takes a distinctly different approach to the subject of rock stardom this time around. Smith says “Bohemian Rhapsody was much more a spectacle movie about what it was like to be there [watching Queen] whereas Rocketman is about being him. It was crafted to let the audience experience things subjectively from Elton John’s point of view.”

Smith, whose credits include Casino Royale, The Hunger Games and an Oscar-nominated mix for Captain Philips, used reverb, EQ, compression and other effects to evoke mood through audio. Describing his approach to the mental breakdown sequence set at a Hollywood pool party, Smith says, “The sound sweeps into this very rolled off, dull audio. And when he has a swig of vodka and starts coughing, we put a slap delay on the cough to show the space he’s in has suddenly shifted.”

John’s isolation contrasts with the noisy crowd of partygoers. “It’s super-loud and everybody’s chatting when Elton walks outside, but then we cut to him underwater in the pool and all of that goes away,” Smith explains. “It’s like a null point. No frequencies are left except these very low-end distant sounds of the party above him as he drifts down. We all have our own idea of what an overdose might feel like and sound has a great way of describing that on a primal level. Here, we used scratchy little feedback sounds and ping-ponged sounds in a weird way to make it feel you’re right there with Elton John.”

Rocketman abruptly transitions from attempted suicide to a recreation of John’s legendary Dodger Stadium gig. “When Elton comes out onto the stage, we go from him feeling unloved and detached to suddenly having thousands of adoring fans singing along with him. You need layers and layers and layers to get that kind of scale, so our musical director Giles Martin recorded hundreds of choir singers, which we combined with recordings of crowd noise. It was important to create this peak in terms of sound level at Dodger Stadium, because it’s an emotional apex, having gone from a very quiet swimming pool to this huge epic event.”

For the rambunctious “Saturday Night’s Alright For a Fight” set piece tracking John’s growth from 14-year-old lad to 20-year-old songwriter over the course of a single song, Smith blended music cues from producer Martin with crowd noise elements and hundreds of foley sound effects assembled by sound designer Matt Collinge. “I might have 150 tracks of crowd noise, 80 tracks of dialogue, 150 tracks of music—at any given point I probably had 300 tracks facing me at the soundboard,” Smith recalls. “With all the little Foley moves, the footsteps, the other actors having fights, it was about finding a level of reality that would connect the audience into the scene but not so much where it becomes pedestrian and literal. You want to mix in just enough reality to apply the glue. At that point, the song can really take the lead.”

Egerton did his own singing in Rocketman. In most cases, he pre-recorded vocals before filming began, then lip-synched to those recordings on set. For one fantasy sequence based on John’s breakthrough 1970 gig at L.A.’s Troubador club, Egerton levitates while performing “Crocodile Rock,” which in real life would not be written until two years later. “Mixing a musical you have to blur the boundary between reality and fantasy,” Smith says. “I think the only thing recorded live at the Troubadour is when Taran counts ‘One two three’ and literally the rest of the scene was created from scratch. The sound does a lot of the heavy lifting in Rocketman, and it’s not like there are textbook solutions: ‘Flip to page 23 of the sound book and see what to do for an overdose.’ We’ve got all these tricks and little techniques to mess around with in order to tell the story, which is great fun.”

Rocketman is in theaters everywhere.