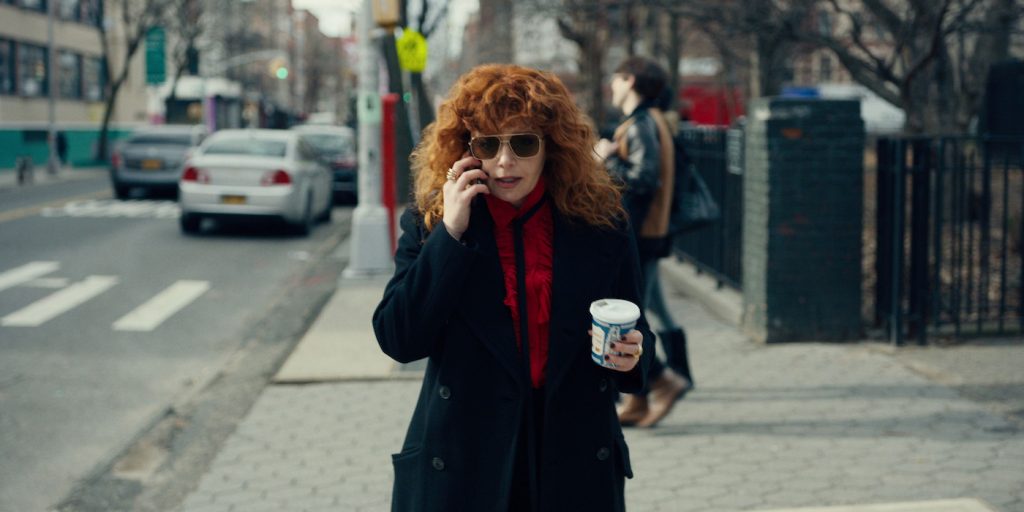 As Nadia, Russian Doll’s wise-cracking heroine who dies repeatedly only to be reborn in the bathroom of her birthday party, Natasha Lyonne looks the part of the quintessential New York woman (which, in real life, she is), her all-black ensemble from boots to blouse easily complementing the withering energy with which she confronts her friends, ex, the homeless guy on the corner, and assorted other compatriots. In contrast, the only other soul in the world who understands her plight because he, too, can’t seem to stop dying, is Alan (Charlie Barnett), outfitted in plaid shirts and slacks as anodyne he is. To Alan’s initial chagrin, the two come together to solve their mutual predicament, looking and sounding like the absolute antithesis to one another as they charge around Manhattan’s East Village, Nadia reminiscent of its angular, screwball past and Alan, its more outwardly successful but pretty milquetoast present.

Nadia’s best friends Lizzie and Maxine (Rebecca Henderson and Greta Lee) have it easier—unaware of Nadia’s many deaths, their lives are on repeat at the party held in Maxine’s hip loft in a former yeshiva. Here, costume designer Jennifer Rogien, a veteran of Girls and Orange is the New Black, expanded the film’s fashion palette, with patterns, overalls, chain shirts, and chokers culminating in outfits evocative of the city’s contemporary creative life yet blissfully outside Instagram-beloved trends. In winking early-90s flashbacks to Nadia’s childhood with her difficult, mentally ill mother, Lenora (played by Chloë Sevigny, a longtime friend of Lyonne and once an early-90s downtown it-girl), Sevigny is outfitted in mom jeans, little Nadia in an oversized sweatshirt, and we realize that fashion, at least in downtown Manhattan, sure has a way of repeating itself. Just like Nadia’s terrible night! We spoke with Rogien about identifying quintessentially New York looks, coding outfits for time loops, and making looks work for eight episodes in a row on Netflix‘s hit series.

How do you deal with trends when seemingly everything is in fashion?

It’s actually something I’ve been more aware of in the age of Instagram. When we started Girls, Instagram was not the phenomenon it is now. There was a lot less instant fashion content than there is now. I think about that even more, given the time between when we shoot and when we air, which for Russian Doll was not quite a year. You know, I’m not a great trend forecaster—I would have a different career if that were the case! So I really tried to be specific to character, rather than either tie into or ignore trends, just because it’s dangerous territory once you try to push characters into fashion characters. Especially with a show like Russian Doll, which is not about fashion at its core.

In looking outside trends, what was your inspiration for Nadia, young and old?

It was very much a New York show, and so I drew a lot on some personal experience and a lot of research, especially for the flashbacks, in terms of the 90s-era Tompkins Square/Lower East Side. I even looked at Tompkins/Lower East Side just a few years ago, because all of New York changes rapidly, but particularly that neighborhood has been subject to a lot of change in terms of real estate development in the last few years. Natasha is a native New Yorker, and she was an amazing source of information and inspiration. She texted me “Joe Pesci meets Marisa Tomei,” which I interpreted to be sort of vintage mobster meets cool 70s rock chick, with some interesting details to make the character slick.

How do you choose outfits that the audience will see over and over again?

A single costume, when you know it’s going to be in the run of the series, takes on a lot more weight visually and character-wise, than having an arc of seven or eight costumes. It’s a lot about trying on a couple racks of things for two outfits and making sure that the proportions and fit are right, the textures are interesting, the layers are right. Another consideration was how much stunt work Natasha and her stunt double had to do in those looks. So there was an element of pragmatism, in addition to making sure they were specific to the character and felt a bit like a New York woman’s uniform, in a way that would make the character feel very real.

For Nadia’s many deaths, how many copies of each clothing item did you need?

Dozens. We literally bought twelve of the first look you see her in, the party look, and I think it was eight of day two, with the red shirt. Which becomes quite challenging, because Natasha is an amazing fashion presence, and has some remarkable friends in the fashion industry. We desperately wanted to work with them, but given the volume of pieces we needed, a lot of our smaller designer friends weren’t able to have that many in stock for something that was completely out of season.

What did you end up sourcing instead?

A complete mix of high and low, most of which was at retail. For example, the tweed coat was a Helmut Lang piece, the jeans were Gap, and the blazer was H&M.

Without adhering to any particular trend, Lizzie and Maxine wear real stand-outs looks—how did you plan these?

The starting place was very similar—make it strong, make it character specific, make it feel like a real person as opposed to a costume. A lot of it was taken from dialogue references in the script. Lizzie’s an art handler, a sculptor, fabricator—there needed to be an element of pragmatism underscoring everything she was wearing, and then she was a real opportunity to go super-vintage, thrifted, eBay, and to really create something unique, both because of who she is and because we didn’t need multiples for her. There was some inspiration from some female art handlers and carpenters I follow on Instagram, who offer interesting vibes that don’t scream ‘I am trying to telegraph something through my clothes,’ but who have a cool look about them which says a lot.

Then with Maxine, we had so much freedom. Natasha gave us the direction of really cool downtown art world persona. Our second choice was Dries van Noten, but we ended up with H&M and Zara. It was all about quirky, statement, somewhat out-there pieces that wouldn’t overshadow the character of Maxine and which Greta would obviously pull off beautifully because she’s such a style star, to begin with. We did a couple of rounds to test the spectrum of how far is too far, how quiet is too quiet, and to do something that would even break the rules of the show a little bit in terms of color.

In the final episode, Nadia and Alan require slight but distinct wardrobe adjustments. How did you choose these new signal items?

I had several conversations with Natasha and Leslie about how to best visualize that because we needed to be able to identify the loops that were overlapping in one episode. The white blouse had been an option for Nadia in our first fitting. We loved it but didn’t know quite what to do with it at the time. When it came to that final episode it made complete sense that it might be something stolen from Maxine and help us effectively code the loops, since it was in her silhouette but different from what we’d seen her in before. Same thing for Charlie’s character Alan—we needed something that was immediately identifiable but wasn’t completely out of left field, even though it was. It made sense that another character would have something to put on him. So we actually planned that scarf into Lizzie’s girlfriend’s character’s look from the get-go.