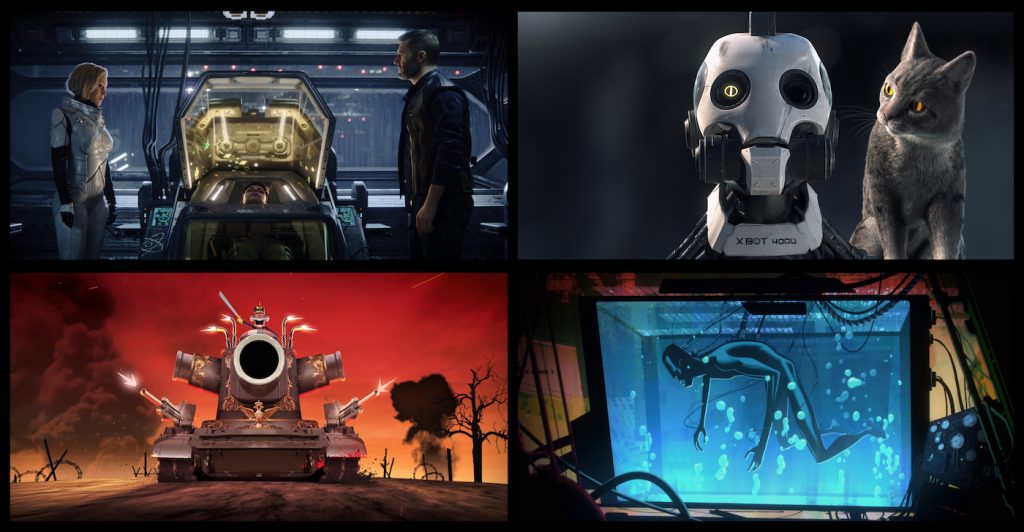 To say that Love, Death & Robots isn’t like anything else on TV wouldn’t be entirely accurate. There’s simply nothing quite like it on TV. It manages to be many things at once; a series of gorgeously and variously animated shorts that range from comedy to horror to sci-fi to fantasy. It has, in my mind, one of the goriest episodes of any show not named Game of Thrones (the legitimately unsettling “Sonnie’s Edge”). It offers moments of true beauty and awe (“Fish Night” and “Zima Blue”) and sequences that are mesmerizingly intense (“Secret War” and “Shape-Shifters,” to name two).

There is one obvious parallel you can draw, and that’s between Love, Death & Robots and Netflix’s other critically acclaimed sci-fi anthology Black Mirror. They’re both fearlessly weird and often deeply unsettling. They both deploy time-tested sci-fi tropes, from sentient robots to militarized technology to spaceships, and twist them into strikingly original stories. For instance, Black Mirror gave us the brilliant “USS Callister,“ nominally an episode set on a Star Trek-like spaceship that turned out to be a fantastic head trip dealing with, among other themes, toxic masculinity. In Love, Death, & Robots, there are two spaceship-based episodes, but let’s just focus on “Helping Hand.” This episode might be a little more straight forward than “USS Callister,” but it still tweaks a sci-fi trope and turns it into something fresh.  The short is about the lengths an astronaut will go to keep from being lost in space. It riffs on Alfonso Cuarón’s lost-in-space epic Gravity and turns it into a body horror nightmare that managed to make me squirm and marvel at the strength of the human will to survive.

Also, like Black Mirror—the brainchild of Charlie Booker and expertly produced by Annabel Jones—Netflix’s new series comes from some seriously talented people. Love, Death & Robots is executive produced by David Fincher, Tim Miller, Jennifer Miller, and Josh Donen. The episodes vary wildly in the look of their animation, their genre, and tone, but most of them deliver a wallop at one point or another. Also, Love, Death & Robots offers bite-sized installments. You could binge all 18-episodes in a sitting. The brevity of each episode means there’s little to no narrative fat, and the themes of the best eps linger long after the short is finished.

Netflix is currently playing around with four distinct episode orders. The version I saw began with the supremely unsettling “Sonnie’s Edge,” which had me wondering if the whole series was going to be as gruesome. It’s not. Others have reported starting off with the deadpan “When the Yogurt Took Over,” which imagines a world in which, yes, yogurt took over. You couldn’t have two more disparate episodes launch your series. Incidentally, I want to live in a world where the yogurt took over.

If you enjoy sci-fi, fantasy or horror, you should watch Love, Death, & Robots. If you like Black Mirror then, yeah, obviously you should watch it. Yet I humbly suggest that even if you don’t normally enjoy any of these genres, or animation in general, you should give this series a try. In an effort to nudge you towards this goal, here is the episode list with our brief reason why each installment might be worth your time.

“Alternate Histories“: Who hasn’t dreamed of going back in time to kill Hitler? I think about it at least once a month. This episode imagines six supremely weird scenarios in which the Führer dies before he becomes the genocidal maniac who nearly destroyed the world. One of the most absurd episodes in the series.

“Beyond The Aquila Rift“: A legitimately gorgeous and creepy sci-fi story set in deep space with Matrix-like undertones with photo-realistic animation.

“Fish Night“: One of the series’ most gorgeously crafted episodes. Legitimately beautiful to behold and satisfyingly creepy. Two salesmen have to spend a night in the desert after their car breaks down—what happens next is like The Blue Planet meets Starman meets Jaws. Please go with our X meets Y rubric. Thanks.

“Good Hunting“: A spirit hunter’s son grows fond of the shape-shifter he’s supposed to destroy. What starts as a bloody, beautiful yarn becomes a cyberpunk dreamscape. A standout.

“Ice Age“: Wait, is that Topher Grace and Mary Elizabeth Winstead? Yes, yes it is. In the series most photo-realistic episode, directed by Tim Miller, the two play a young couple who move into an apartment and find a lost civilization in their freezer.

“Helping Hand“: We mentioned this episode at the top. It’s another standout. Its Gravity meets—well, we don’t want to tell you the other film because you’ll immediately guess what happens. Just watch this one. It’s short and gorgeous and gross and redemptive.

“Lucky 13“: One of three war stories in the series, all of which manage to be very different and very tense. Samira Wiley plays a pilot forced to use the titular Lucky 13 plane that two crews have died on. What she finds in the heap of junk is something unexpected.

“Shape-Shifters“: Another war story, only this one is set in the more photo-realistic world of Afghanistan. Yet “Shape-Shifters” turns the realistic war setting on its head, giving several characters abilities that would make the X-Men’s Wolverine blush. Very gory.

“Secret War“: The third episode set during a war. “Secret War” puts you deep in Siberia with an elite unit of the Red Army fighting creatures that seem to share some DNA with A Quiet Place‘s monsters. Beautifully made and harrowing.

“Sonnie’s Edge“: As previously stated, this was the first episode I saw, and it was shockingly gory. It also proves how much leeway animation gives writers and directors when envisioning their worlds. You’ve never seen a cage match like this before.

“Sucker of Souls“: Another episode that leans more towards Saturday morning cartoon than Black Mirror-like sci-fi horror. It includes Dracula and cats. It’s a nice palette cleanser, no matter where it falls in your episode order.

“Suits“: It’s War of the World meets Pacific Rim meets Alexander Payne’s Nebraska. It somehow all works. The gist is a group of farmers band together to fight off an alien invasion.

“The Dump“: Funny, gross, and imaginative. A city-slicker comes to Ugly Dave’s home—the dump of the episode’s title—to tell him he’s being evicted. That’s when Dave introduces him to his friend…

“The Witness“: Another standout episode, with equal parts Christopher Nolan’s Memento, Tate Taylor’s The Girl on the Train and Ridley Scott’s Blade Runner. A woman in a futuristic city witnesses a murder and goes on the run, with the killer right behind her. The final twist is delicious.

“Three Robots“: Wall-E meets The Three Amigos. Okay, maybe the latter is a stretch, but these three robot friends who go on a sightseeing tour of a post-apocalyptic city are charming. Once again, cats become a narrative focal point.

“When The Yogurt Took Over“: Exactly what the title says it is. Why wouldn’t you want to watch an episode depicting super-intelligent yogurt taking over the planet? Given the opportunity right now, wouldn’t you sort of get behind giving sentient yogurt a crack at improving our world? Could a very smart bowl of Chobani make the world any worse?

“Zima Blue“: Probably the series’ most unapologetically trippy episode, “Zima Blue” eschews mayhem, murder and the downfall of humanity for an artist’s quest to seek the true meaning of the universe and life itself. The titular famous artist conjures his most incredible piece yet in a final work that stuns and shocks his adoring fans.