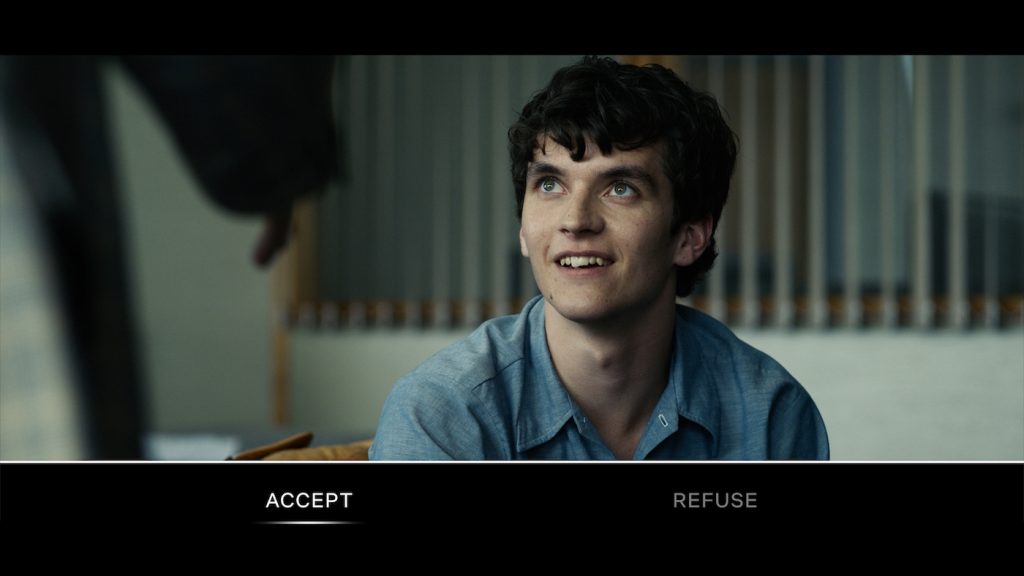 The Bespoke Technology That Made Netflix’s Black Mirror: Bandersnatch Possible

Sugar puffs or frosties? Yell at dad or pour tea all over a keyboard? By now, the audience choices and subsequent on-screen fallout possibilities in Netflix’s first interactive film for adults, Bandersnatch, have been well documented across the web. Home-made flow charts painstakingly illustrate the complexity of 19-year-old video game creator Stefan’s journey as he tries to develop an interactive computer game in 1984, navigating relationships with his irritating father, new boss, and brilliant but off-the-wall colleague, Colin. But whether we choose Colin or Stefan to make an LSD-induced balcony jump, breaking down the main pathways to the film’s five endings after the fact is one thing; managing the creation of a branching story with more than an actual trillion total unique outcomes is another. To woo Bandersnatch’s Black Mirror creators, Charlie Brooker and Annabel Jones, and make a new level of seamless, choose-your-own-adventure filmmaking possible, Netflix created a new piece of technology, Branch Manager.

“We said we’ll start with the technology, prove it with kids, and with adults, we want a really great coming out party,” Carla Engelbrecht, Netflix’s Director of Product Innovation, tells me. When the company approached Brooker and Jones, however, the branching technology Netflix had in place wasn’t sufficient. Interactive children’s titles, like Puss in Book and Buddy Thunderstruck, are comparatively simple, with 15 to 20 choice points. “We could manage it with spreadsheets,” Engelbrecht says. “With Bandersnatch, we realized that what Charlie had in mind was beyond what the human mind could easily grasp.” Netflix kept at it with Branch Manager, and Brooker began work on the film using video game software called Twine. He switched to Netflix’s new technology about three-quarters of the way through the script process. “Branch Manager came about as a common language for all of us to be able to talk about what was happening in the story,” Engelbrecht explains. “It allows for creating the outline, the flow. It’s a flow chart, really.”

Once Brooker made the switch, Branch Manager was utilized through post-production. A story-map created using the technology, for example, was translated into a computer-readable spreadsheet that Netflix’s engineers used to implement the film. “Additionally, you can embed the script into each node of the flow chart and eventually, cuts of video as well. It enables us all to be able to look at the same thing and even as early as the outline, experience what it was going to feel like,” says Engelbrecht.

For a film with a trillion possible outcomes, a relatively consistent experience throughout the production process was key. The film’s editor, Tony Kearns, explains that “when I first read the script [via Twine], I realized how complex and multi-faceted the film was going to be. Initially, I was obviously very daunted and a little terrified.” To get a mental picture of the story, his initial solution was to break down the script segments into spreadsheets. (Who knew making a story involving psychedelic drugs, murder, and 1980s video games could rely so heavily on a ubiquitous corporate tool?) Once editing was underway and Branch Manager was fully operational, however, he exported segments to his first assistant editor, John Weeks — “a coder in a former life” — who coded them into Branch Manager, in “a very close approximation of what the final film would be in terms of the experience.” Kearns estimates that Weeks made at least 100 different versions of the film, and his team used these to judge the technical aspects of the edits as they went along, cutting choice points or merging segments in paths that had become overly complex.

They were also able to assess the storytelling and emotional components of the story, a feature critical for the film’s talent, who needed to deliver numerous scenes with minute layers of subtle emotional difference. “David Slade [the director] and I talked a lot about this and the approach was to keep it as normal as possible for the talent, and for David and the story editor to take on most of the burden of what was going on,” Engelbrecht said. However, “the earlobe/bite nails scene they had to redo numerous times and say now you’re pulling your earlobe, now you’re biting your nails. Or in a scene where Stefan first meets Colin, it’s largely the same dialogue but Colin has this deja vu and has to deliver the same scene with a slight shift in his motivation. For the first couple of days there was a little bit of challenge around that. The actors both went and read the Branch Manager files, experienced the stories interactively and were like, oh now I get it. You need the talent to understand what’s going on or it can be supremely frustrating for them.”

Netflix is notorious for keeping fresh projects under wraps, but Engelbrecht assures me there’s something else on the way that uses Branch Manager technology and which she would like to talk about, but can’t. (This is consistent with her experience on Bandersnatch, “eighteen months when even my mom didn’t know what I was doing.”) Much of the film’s immediate post-premiere press focused on whether or not movie-viewing is entering a new era of ubiquitous interactive filmmaking. Based on Netflix’s coy disclosures, it seems clear that it’s on its way to soon become a common element of the streaming experience. “The storytellers who are coming to us are saying ‘now you can tell the story I always wanted to tell,’” says Engelbrecht. “They’re across all kinds of genres. We’re not digging on what to tell this way.”