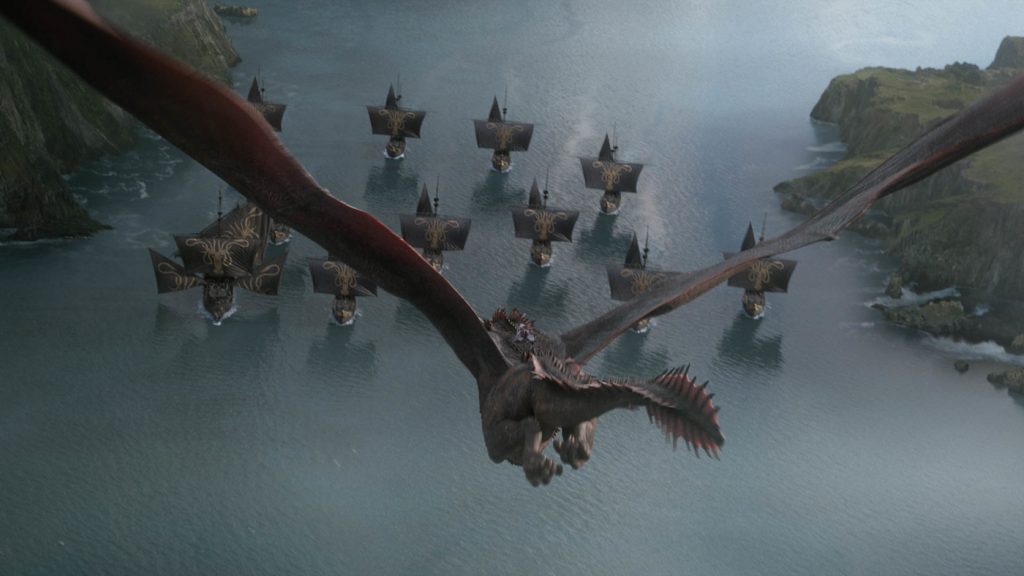 And then there was one. We’ve watched Dany’s dragons grow from wee babies to apex predators capable of torching an entire “Loot Train” and every Lannister soldier who protected it. They’ve inspired fear and awe, a trio of mystical, mayhem-creating monsters that are the only children Dany has ever known or loved. Yet looking back, they’ve never been even close to invincible. They were, of course, vulnerable as babies, but they even proved susceptible to harm by human hands as adults. At almost the moment Dany’s dragons became mature, they’ve been getting hurt. It seems as if there’s been a need to even the playing field with Dany so that she can’t just fly right into whatever territory she wants, torch the place, and claim it. She’s been a little like a Westerosi Captain Marvel, possibly too powerful to make any fight interesting, so there’s been a need to continually knock her and her dragons around. She’s now down to one dragon and fighting an enemy that has made dozens of dragon-killing weapons. Yet even before the scorpion guns, Dany’s dragons have been getting hurt. Recall Drogon pierced by a spear in the fighting pits of Meereen:

Then during the aforementioned “Loot Train” episode, we saw the damage a weapon created specifically to kill dragons can do.

Qyburn had learned about Drogon’s minor, but revelatory, injury in the fighting pits, so he had these massive crossbows created for the express purpose of killing dragons. In the Loot Train episode, Bronn manages to hit Drogon with one and do some damage. Luckily for Dany and Drogon, no vital organs were punctured and the dragon carried on.

But that was then. Fast forward to the penultimate episode of season 7, “Beyond the Wall,” when Dany lost Viserion to the Night King and his perfectly tossed ice spear. (Also recall that Dany flew north of the wall to save Jon’s ass, the only reason Viserion got killed in the first place.) While Viserion continued to fight in later episodes, he was no longer doing so for Dany. She was down to two dragons.

Viserion finally died once Arya Stark plunged a dagger into the Night King’s gut in “The Long Night.” Dany’s two remaining dragons managed to survive and gave her and Jon a key advantage in their coming fight with Cersei Lannister.

But then came the big twist in “The Last of the Starks,” Dany lost Rhaegar to another scorpion gun. This time it was Euron Greyjoy, whose fleet had surprised Dany and came equipped with a half dozen or so of the dragon-killing weapons. Rhaegar survived the Battle of Winterfell only to be shot out of the sky by the preening Euron and his Iron Fleet. It was shocking even if Dany’s army really should have sent scouts ahead of them on their mission to Dragonstone.

In the teaser for the upcoming episode, Dany’s last surviving dragon is a focal point. You hear Drogon’s shrieking, but you never see him, and the teaser is cut in such a way to show a worried Euron looking skyward. Has Dany learned not to fly ahead of her army and directly into harm’s way?

So will Drogon survive? It no longer seems possible to simply fly him into the battle with Cersei. There are the dozen (or more!) scorpion guns, which will likely be everywhere. The guns are on Euron’s ships, situated around King’s Landing, probably even in Cersei’s bedchambers. There’s the fact that it’s much easier to focus on shooting down a single dragon rather than two. And while no one can claim to know a thing about dragon psychology, how must the poor beast be feeling now that he’s the last of his kind?

Then there’s the fact that Dany’s mythic power resides in her dragons. Losing Drogon would be a fatal blow to her claim on the throne, especially considering Jon Snow’s true parentage is now an open secret. Then there’s the fact that the Game of Thrones brain trust seems to be souring on Dany. Her sanity has been called into question. Her advisors are openly discussing her fitness for office. Despite being a huge force in the battle against the dead, she remains unloved in the north. Losing Drogon could be catastrophic for Dany, even if she and Jon win the Last War against Cersei.

What Dany isn’t given enough credit for, not even close, is how insanely brave she is. She routinely flies over battles on a dragon and engages the enemy. She has saved Jon twice now, at great risk to herself. Dany does this while dodging flying bolts, spears, an undead dragon, and hundreds of zombies. She just witnessed Cersei execute Missandei, one of her most trusted advisors and oldest friends. This is not the face of someone who is going to back down from a battle. The question we have is will Dany learn from past mistakes? Will she figure out a way to use Drogon as the ultimate weapon rather than a battering ram? Will she avenge Viserion and Rhaegar? Will the Game of Thrones co-creators David Benioff and D.B. Weiss let her?