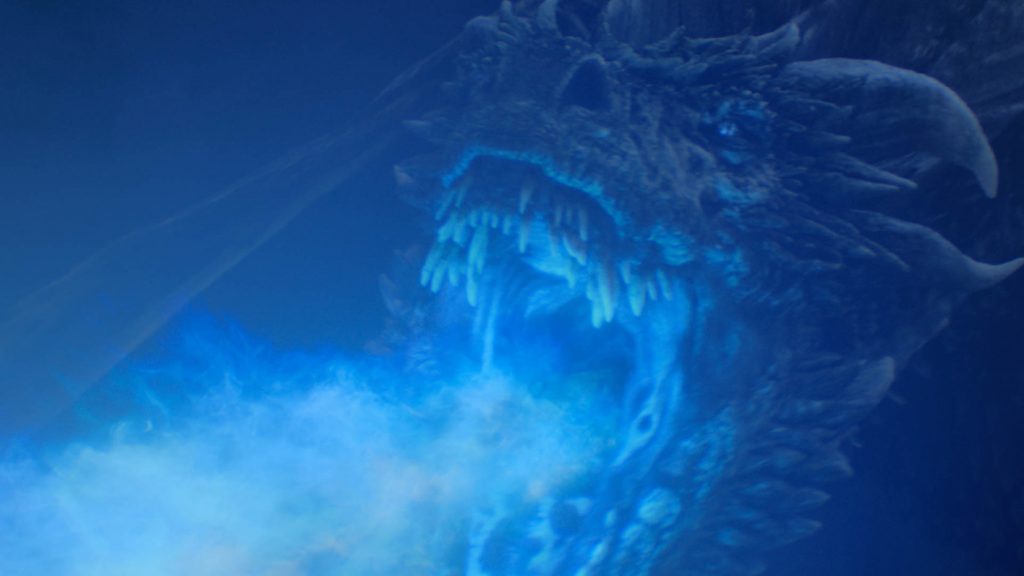 Ever since the Night King felled Viserion with an expertly thrown spear in “Beyond the Wall,” a dragon dogfight was all but assured. Well, first the Night King had to command his wights to drag the dead dragon from the icy depths of a lake. Then he reanimated Viserion into the blue-eyed, undead beast. Then the dragon dogfight was all but assured. And finally, in “The Long Night,” we got the dueling dragons we’ve been waiting for. Now the question is—what’s the status of our dragons?

The dragon dogfight above the killing fields of Winterfell took a while to get going. The Night King waited a bit before appearing atop Viserion and engaging Jon, atop Rhaegar, in a vicious battle. The idea had been for Dany and Jon to wait until the Night King was lured to the Godswood to kill Bran. Once the Night King exposed himself, they were supposed to pounce on him with their superior dragon numbers and kill him. Then things got complicated. Dany watched in horror as her Dothraki army was all but obliterated. In a Jon-like move, she let her emotions get the best of her and she jumped on Drogon and flew off into the fray. Jon had no choice but to follow.

For a while in the Battle of Winterfell, Jon and Dany strafed the Night King’s wight army fairly effectively. Then the Night King showed up on Viserion and the dragon dogfight began.

Surprisingly, most of the fighting was between Jon atop Rhaegar and the Night King on Viserion. It wasn’t that easy to track who was winning at any particular moment, although it was evident both dragons were getting savagely wounded. If you had assumed that this would be a firefight—Rhaegar and Drogon’s yellow-red blasts versus Viserion’s blue flames, you were as surprised as I was. Yes, Viserion attempted to blast Rhaegar several times with his ice-fire, but mostly this was a battle of claws and fangs. Jon barely avoided the snapping jaws of Viserion on several occasions. Both dragons tore and bit huge holes into one another. The fight was frenzied, somewhat difficult to parse, and oddly sad.

Eventually, things looked very bleak for Jon and Rhaegar. Viserion had done enough damage to send Rhaegar into a nosedive,  the dragon version of “No Mas.” Jon flew off his back and Rhaegar crashed somewhere off into the snowy distance. That was it. Rhaegar disappeared for the rest of the episode. It seemed likely he was dead.

At this particular point, you might have given the win to Viserion. Yet when we next encountered the zombie dragon, he was grievously wounded. Rhaegal had ripped huge chunks of Viserion’s throat out, and the undead dragon was raging around on the ground in Winterfell. He was still a terrifying, mortal threat, of course. He pinned Jon down and made it impossible for him to get to Bran in the Godswood.  (Jon didn’t need—Arya Stark had it covered.) Viserion’s fate was still somewhat unclear here until Arya gutted the Night King and everyone one of his subjects, including his mighty ice dragon, burst into icy pieces.

Meanwhile, Rhaegar made his stunning reappearance in the trailer for episode four. Not only is Rhaegar alive, but he’s also flying (with holes in his wings, however.) It’s unclear how much time has passed between the Battle of Winterfell and this glimpse at Rhaegar, but if he’s flying, he’s likely in decent enough shape to take part in the coming battle against Cersei.

Drogon’s fate was even more surprising. Dany had used him effectively to buy time for the living, but she made the mistake of landing him on the battlefield after her failed attempt to barbecue the Night King. (He was immune to fire just like her! Does this mean he might be part—oh it doesn’t matter he’s dead.) Once on the ground, an overwhelming number of wights piled atop Drogon and began stabbing and slashing him. Isn’t dragon skin too tough for a wight knife? Apparently not. Drogon wailed and raged. The staggering number of wights piling atop him seemed to be doing real damage. He finally was able to take off, shaking the wights off him, but he certainly seemed wounded.

How wounded? Consider the fact that Drogon didn’t swoop back down and torch all the wights about to kill Dany. That’s very un-Drogon like. Luckily for her, Ser Jorah appeared and gave his life to save hers. Then Drogon returned and surrounded Dany and the dead Jorah in his wings. A sweet gesture, perhaps indicating he’s okay?

Shockingly, it seems that both of Dany’s dragons survived intact enough to fight in the Last War. How effective they are, and whether they can survive Cersei’s scorpion gun (the Qyburn-manufactured, Bronn-tested weapon that’s already hurt Drogon) will be found out soon enough.