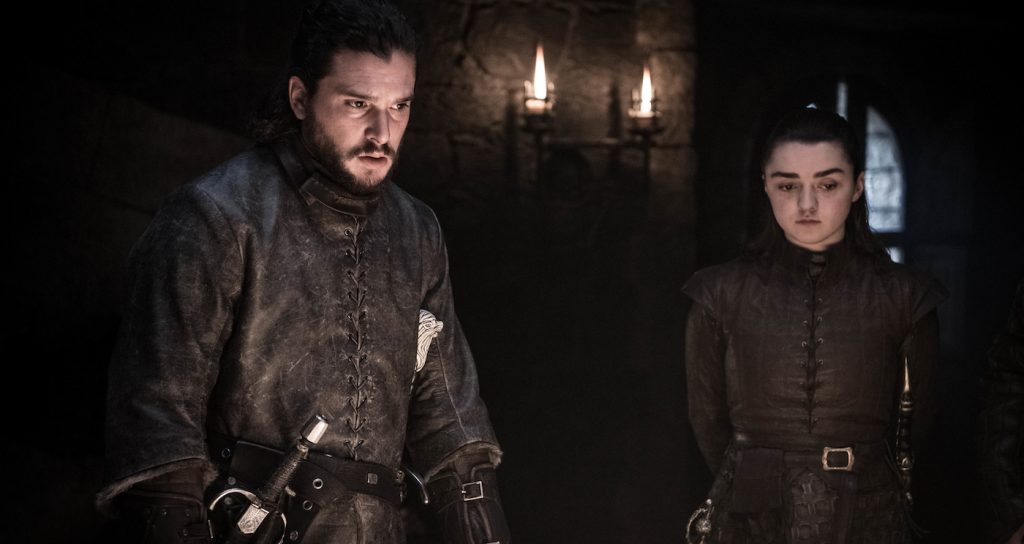 “The Things we do for Love”: Game of Thrones Episode 2 Recap

One way we can look at the first two episodes of Game of Thrones’ eighth and final season is as the staging of a funeral. In the premiere episode, “Winterfell,” the beloved sons and daughters of the Seven Kingdom were gathering in the titular northern kingdom to pay their respects a world they once knew. There was awkward small talk (Sansa and Daenerys), uncomfortable reunions (Bran and Jon, Bran and Jaime Lannister, Bran and everyone), and somber reflection. The second episode functioned as the wake. With drinks in hand and hard-won wisdom in their hearts, our survivors came together and laughed in the face of death. It beats weeping.

The episode offered something of a spotlight for Jaime Lannister‘s long journey towards decency. It was also a reminder—not stated enough—of how good this cast is. Nikolaj Coster-Waldau’s performance as the now one-handed, grizzled former golden boy of King’s Landing made for riveting TV. So, too, did seeing this reformed and physically reduced version of the former cocksure knight seeking forgiveness and bestowing titles. This is the same guy who burst into the pilot with his lacrosse bro attitude, flowing golden locks and sister-schtupping? This is the guy who pushed a child out of a window? Yes and no!

The episode’s opening minutes, indeed, its very first shot, showed Jaime on trial. He was standing before the leaders of Winterfell, all of whom had plenty of reason to distrust and hate him. Dany reminded those gathered that Jaime got his nickname “Kingslayer” by stabbing her father in the back and slitting his throat. Sansa recalled the time Jaime roughed up her father—for no good reason—in the streets of King’s Landing. We all know how things turned out for poor Ned.

Jaime was surprisingly unrepentant, given the circumstances. He calmly explained that all those instances were carried out in the defense of his house, and his family. He’d even do them all again. This attempt to fashion some of his most infamously brutal acts as mere duty wasn’t going to win over Sansa or Dany. Then came another classic Bran Stark record scratch moment. Bran cryptically repeated the words Jaime said before he shoved Bran out of a window in the pilot, paralyzing him—”The things we do for love.” Coster-Waldau’s facial expression here deserves six Emmys.

Jaime was shook. Everyone else was confused. It seemed he was on the verge of being sentenced to death when Brienne of Tarth, his former captor, spoke up in defense of his character. It was enough to move Sansa to spare Jaime and allow him to stay and fight. Brienne’s full-throated defense would be returned, in a beautiful way, towards the end of the episode.

There was another important ripple effect from Jaime’s trial; he confirmed his sister Cersei had never intended to send the Lannister army north. This meant that Tyrion had once again botched a big plan. Dany was furious. It seemed Tyrion was on the outs as her Hand, until another former captor went to bat for their charge.

In this case, it was Ser Jorah Mormont. Jorah had once kidnapped Tyrion and planned to bring him to Dany as a token of his loyalty, but the plan was upended by various travails, not the least of which was Jorah contracting greyscale. Jorah admits to Dany he was heartbroken when she made Tyrion her Hand (and for plenty of other reasons besides), yet he has grown to appreciate the man’s mind. “He learns from his mistakes,” Jorah tells her, which makes Tyrion something of an outlier in the Seven Kingdoms of Stubborn Idiots. Jorah not only counsels Dany to keep Tyrion as her Hand, but he has another piece of advice for her, and it has to do with a certain Lady of Winterfell.

Sansa Stark has made plain her distrust of the southern Queen. Dany arrives in her chambers for a little chat. The two begin to bond, haltingly at first, and then with what appears genuine affection.

Sansa’s concern–well, one of them, anyway—is that Jon’s love for Dany has impaired his judgment. She suggests that it would be easy for Dany to manipulate Jon. Dany sees it differently, and the history of her relationship with Jon she lays out even brings a smile from Sansa. While many northerners (looking at you, Little Lady Lyanna Mormont) have suggested that Jon’s decision to bend the knee to Dany was misguided (at best) and pathetic (at second best), Dany says that’s backward. Her whole life she’s wanted nothing more than to take her “rightful” place as ruler of the Seven Kingdoms. Yet here she is, in the north, of all places, fighting Jon’s war, putting all her own ambitions at risk because she’s in love with the brooding do-gooder. “Tell me,” she says to Sana, “who manipulated whom?”

It was a great moment, and two of Game of Thrones most potent characters seemed on the verge of an actual friendship. They even held hands!

Sansa wanted to know what would happen to the north if Dany got what she wished. The north had fought for its independence, and Sansa pressed Dany on whether she would recognize their independence as ruler. The answer seemed to come, first, as a look—Dany appeared both vexed and a little haunted by the query. Then she pulled her hand away.

In one of the episode’s most affecting scenes, Jaime found Bran by the spot all self-respecting northerners like to ponder the immensity of the universe and the appalling lack of places to be alone in Winterfell, the weirwood tree. Jaime had defended his actions earlier, but he feels differently about what he did to Bran. It was a beautiful scene, and for once, Bran’s spectral detachment felt like something akin to kindness here. He tells Jaime that had he not shoved Bran out of that window, neither man would be who they were now. When Jaime asks why Bran didn’t reveal what he’d done earlier, he replies that a dead Jaime wouldn’t be very much help in defending Winterfell. Awwww.

Down in the crypt, Jon was trying to make sense of Sam’s revelation. It seemed that the veracity of Sam’s reveal—that Jon’s half Targaryen and the rightful ruler of the Seven Kingdoms, was starting to sink in. Samwell is a very effective messenger. While Jon comes to accept his true parentage, the next question is whether he’ll also accept Sam’s low opinion of Dany. Later on in the episode, Jon finally reveals all this to Dany. The first thing you might expect Dany to react to is the fact she’s Jon’s aunt, but incest isn’t really that big a thing in Westeros and besides, she’s more concerned about the fact that Jon would be the rightful heir to the throne. There’s no time to discuss, however, because a horn blares signaling that Death has arrived.

Before Jon dishes to Dany about his past, Tormund Giantsbane, Beric and Dolorous Ed returned to Winterfell from the grisly scene at Last Hearth. The grim reality of the situation is finally given a definitive time table. The Night King and his army of the dead will be at Winterfell before sunrise. The time for talk didn’t so much come to an end as enter into a new gallows humor phase. More or less everyone in Winterfell is sure they’re going to die, which means it was time to start drinking and carousing.

You might rightfully question the wisdom of trying to fight a massive army of the undead with a hangover (or, even worse, while drunk), but you can understand the impulse. The Hound’s swilling up on one of Winterfell’s many parapets. Arya joins him briefly, but their reunion is cut short when Beric appears and starts babbling about the Lord of Light. She wisely decides she’s not spending her likely last hours on earth with two weird old men.

Arya has something else in mind, and it comes covered in soot and goes by the name Gendry. Despite Winterfell being the size of a high school cafeteria and stuffed to the gills with people, the two manage to find a cozy, candle-lit spot, complete with a fireplace, to consummate their budding relationship.

Meanwhile, a grand old party was starting by another fireplace. Tyrion, Davos Seaworth, Jaime, Brienne, Podrick, and, hilariously, Tormund all gather round for some old fashioned boozing and storytelling. An entire separate story could (and will) be written about Tormund’s explanation of how he got the name “Giantsbane.” The short version is he killed a giant and then suckled at the teat of the dead giant’s giant wife. Hence “Giantsbane” and Tormund’s incredible strength. All of this is told, of course, in an effort to seduce Brienne. The bearded, wild-eyed redhead’s grasp on courtship and flirting is, needless to say, very wildling. Brienne seems somewhat uncomfortable, if not a little amused, at his attention. Tormund is many wonderful things, but he’s crap at reading a room. Yet, he’s a lovable lunatic.

The group should be resting, but seriously, who could sleep in this scenario? They’re all gonna die, so the decision is made to stay together, drink and talk. Tormund is surprised to find out that Brienne is not a knight, considering her obvious skills and valor. This lead’s to one of the more lovely scenes in the entire series—Jaime knights Brienne.

Once again the performances were fantastic. Coster-Waldau and Gwendoline Christie’s faces, bathed in firelight, shone with emotion. Jaime is only in Winterfell because of Brienne, because of who she is and who she helped him become. Earlier in the episode Jaime approached her and asked if he could serve beneath her, defending Winterfell at her command. Now, with the power vested in him by his own knighthood, Jaime bestowed the title Brienne had earned long ago. In a few minutes, a horn would sound signaling the arrival of the Night King and certain death. But before that could happen, by the warmth of the fire and the warmth of these former enemies turned friends, Ser Brienne of Tarth rose to her feet a knight. Jaime beamed. There was clapping and cheering. Brienne had tears in her eyes. She wasn’t the only one.