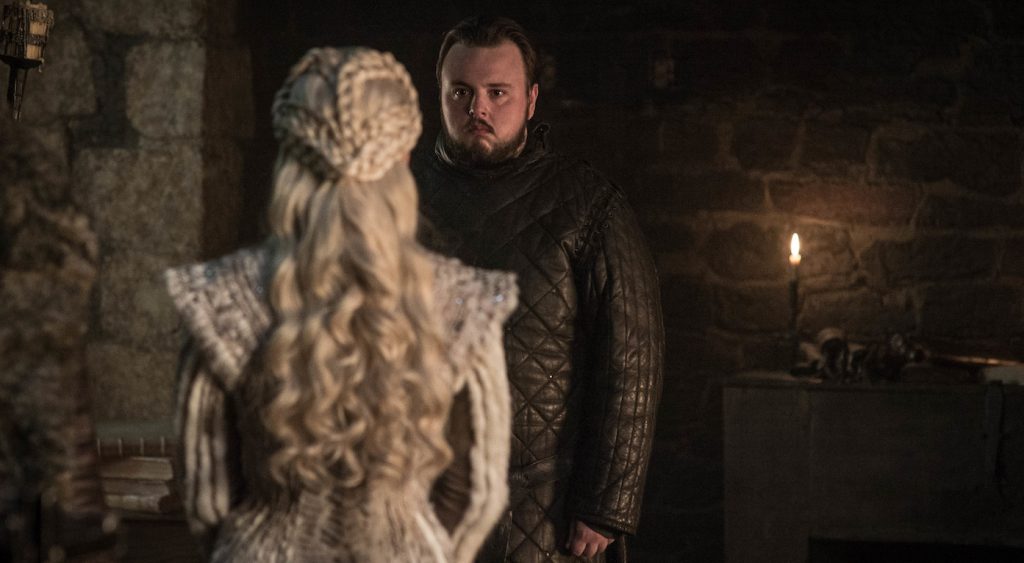 Samwell Tarly vs. Daenerys Targaryen is Game of Thrones Most Intriguing Battle

Game of Thrones is, among many other things, a show about the price of intolerance. Most of the show’s characters and the majority of those who want to rule the Seven Kingdoms are more or less intolerant. They see an unbending will as strength and punishing would-be usurpers and run-of-the-mill rebels as a necessity of good governance. The Stark’s high moral codes, so infamously self-defeating, also required a level of intolerance, too. Ned Stark taught his sons that not only did leaders need to order executions from time to time, but they also had to be the ones to swing the sword. Jon, inarguably the noblest character left on the show, has executed many people at this point.

It’s their way or the high way. It’s bend the knee or lose your head. This is obviously true for proudly, seethingly ruthless leaders like Cersei Lannister. It was true about her sociopathic son Joffrey, and more or less true about her father, Twyin. It was true about Stannis Baratheon, the grotesque Walder Frey, and Khal Drogo. But is it true about Daenerys Targaryen? She’s the woman who “freed” Meereen, after all. She’s the woman who credibly accused Jorah Mormont of being a traitor, but then let him live. Don’t tell any of this to Samwell Tarly, however. He believes she’s intolerant, cold, and unfit to lead. And his words carry a lot of weight with Jon Snow.

In the season 8’s premiere “Winterfell,” the budding Maester (played by John Bradley) turned out to be one of Dany’s most effective critics. Dany revealed to him that both his father and brother refused to bend the knee to her and, as a consequence, got turned to ash by her dragons. Despite his family treating him like dirt, they were still his family. Sam was heartbroken and rushed out into the Winterfell courtyard. There he ran into Bran Stark, who told him it was time to tell Jon Snow the truth about his heritage. Sam mustered the courage and did just that, explaining to Jon that he was the rightful heir to the throne. You’re a bastard, Sam explained, you’re the son of Rhaegar Targaryen and Lyanna Stark. This means Jon’s ahead of Dany in the line of succession. It also means he’s her nephew. Yet the point Sam really wanted to hammer home was not only about lineage, it was about who would actually make the better ruler.

Actor John Bradley’s performance in this episode was aces—as it has been throughout his run as Sam on GoT. Speaking to Collider, Bradley explained what Dany revealed to Sam at that moment.

“It’s all been kind of expedited because of that encounter he had with Dany immediately before that. Once Dany told him about what she’d done to his family and the father and brother, the fact that she’s burnt them alive for a simple act of rebellion really, and a simple act of defiance, it kind of indicates to Sam this is a very volatile character and a very violent character, and not only that, but also unstable and imbalanced and hell-bent on power. I think he eyes her very warily now.”

Bradley explained that the way Emilia Clarke played the scene helped him shape Sam’s reaction. It’s one thing to flambé two people for refusing to bend the knee. It’s another to their son and brother without so much as a twitch of emotion:

“Emilia’s detached performance of that really fed into my performance,” Bradley told Collider. “She’s cold and she’s not going to make it any easier for Sam at all and that’s when Sam realizes that she’s a psychopath. She’s not got any feeling. She’s not got any sense of emotion at all. He’s dealing with somebody who’s very volatile and very kind of…morally bankrupt almost, and that’s what feeds him into going in to tell Jon Snow because you don’t want a morally bankrupt leader like they have at the moment. That’s when all of his doubts about Dany really are solidified in that moment, really.”

So there you have it. Samwell Tarly wants his friend Jon on the throne not only because he believes Jon’s a more tolerant, caring human being, but because he equally believes Dany is none of those things. There is no one Jon trusts more than Sam. Having his best friend and most trusted moral compass telling him Dany is no good could push him towards claiming the throne for himself. Dany has bested just about every man whose tried to tangle with her. Yet she’s never dealt with someone like Sam, whose emotions and inherent decency always seemed like the quickest path to death, but who has become, not despite of these traits but because of them, a serious challenge to Dany’s rule. If Sam thinks you’re a bad person, you might be in trouble.