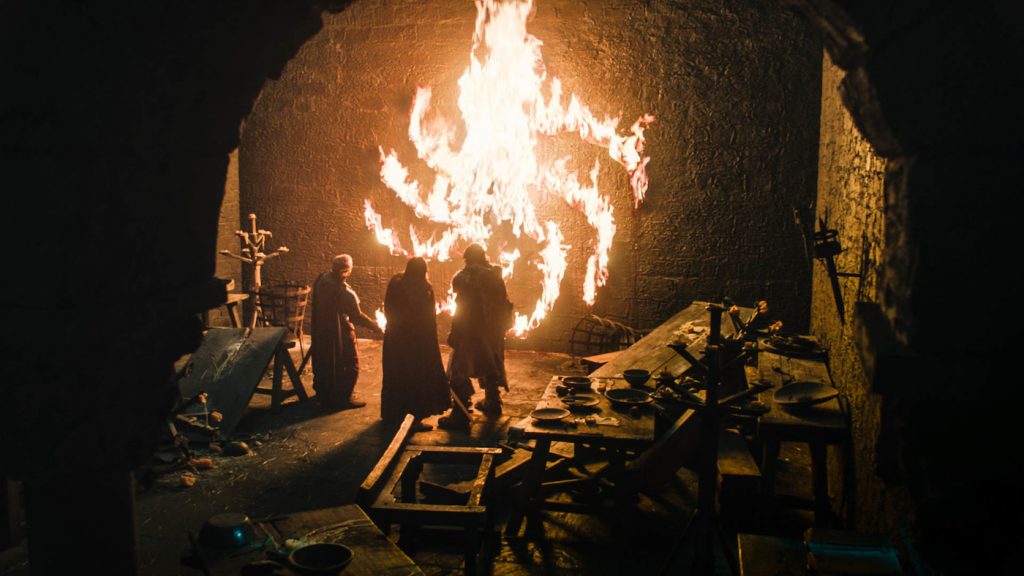 A Gruesome Theory Behind the Night King’s Spiral of Death

We were treated to a gruesome sight towards the end of Game of Thrones‘ season 8 premiere. Little Lord Ned of House of Umber was staked to a wall, encircled by severed arms. It was a message from the Night King. This macabre calling card was made all the more brutal when the undead Ned began screaming. Beric put him out of his misery, stabbing him through the chest with his flaming sword. The whole sequence was a grim reminder that while the living squabble in Winterfell and King’s Landing, the dead are on the move and they’re focused. On body part art design. But also mass murder.

Why did the Night King go out of his way to make an art installation of Ned’s murder? The body part spiral he fashioned was in keeping with the White Walker aesthetic; we’ve seen them make spirals before. As Polygon points out, the undead have used the spiral motif with stones around the weirwood tree that the Night King himself was created by the Children of the Forest. They used it again on the cave walls of Dragonstone. They’re nothing if not consistent.

One theory posits that the spiral is a mocking, bastardized version of the Targaryen sigil. Polygon writer Jordan Oloman points out that this theory gained heat the moment Beric lit up the swirl with his sword. The flaming version definitely looked Targaryen-like, especially considering they were the House associated with dragons. Yet there’s another theory that seems more interesting and likely.

What if Ned’s death wasn’t just meant to spook the living, but to reveal the Night King’s plans? While the Night King didn’t spare the child, he has spared people in the past. Or perhaps it’s more accurate to say that he didn’t go out of his way to finish certain people off. He let Bran and Samwell survive, and he didn’t kill Jon and Dany when they (idiotically) went on their wight-bagging mission. Why? This is a question we don’t have the answer to, yet.

As for children, they’re of particular interest to White Walkers. Recall their grotesque arrangement with Craster. The creepy recluse lived north of the wall, and the White Walkers let him go on living so long as he provided them with fresh children. He kept a harem of young women on hand for the purpose, and this is where Samwell found Gilly and Sam Jr. and saved them both. The reason for this arrangement is plain; the White Walkers can raise an army of wights from their vanquished foes, but they can’t so easily create new White Walkers. They need children.

The Night King is not a braindead zombie like his army of wights. None of the White Walkers are. They plot and plan. They deploy tactics, often besting their human adversaries. The Night King’s message in the premiere might have been about his true aims; he’s coming for the children. Perhaps one child in particular—one with a particularly potent bloodline of Stark and Targaryen. If the Night King is trying to create some kind of Undead World, with him at the top, he’ll need fresh children to do so. Perhaps the message sent via Ned Umber and that spiral of arms is that he doesn’t just want to kill all the living, he wants their babies.

Photos for the upcoming episode further reveal what we glimpsed in the teaser—Jaime Lannister has some explaining to do in Winterfell.